Move over, Sasquatch: Google's mysterious computerized Glasses have been captured on video for the first time.

Google engineer Sebastian Thrun, one of the primary Googlers in the secretive Google X lab that works on Project Glass, recently appeared on The Charlie Rose Show to talk about Google's "glasses", self-driving car, and his startup Udacity; and as a special surprise, he became the first Google employee to appear in a video wearing a prototype of Google's Heads-Up Display (HUD) specs, sporting the glasses set for the entirety of the almost 20-minute interview.

(You can watch Thrun's interview on Charlie Rose's website here.)

Thrun discusses what the glasses can do right now -- including send emails, connect to Google+, and share a live-stream of what you're looking at -- and he even takes a photograph of Rose as he talks. Here's that photo, which Thrun confirms on his Google+ page that he took during the interview and apparently shared to Google+ while on the Charlie Rose set: 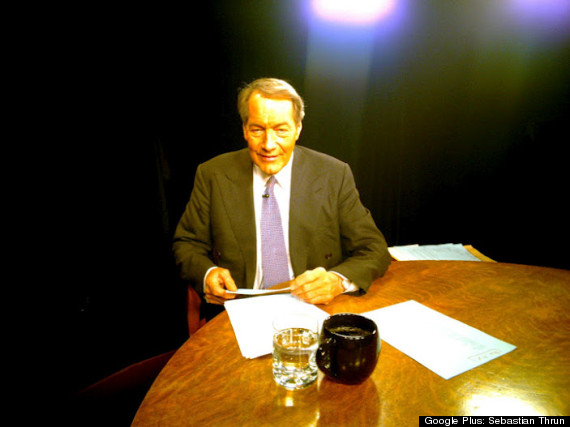 This might be the first photo that has been publicly acknowledged to have been taken using Google's head-mounted device, but it's not the first time we've seen the so-called "Google Glasses" in public; Google co-founder Sergey Brin was spotted at a charity event in San Francisco wearing a pair last month.

Thrun's interview, however, is the first time a Google employee has discussed the capabilities of the glasses on the record.
Among the juicy tidbits he shared with Charlie Rose: Thrun demonstrates taking a photo through the front camera on the glasses; after he takes a photo, his friends on Google+ show up on the translucent panel that partially covers one of his eyes; and with a nod of the head, the photo is shared to his Circles on Google+. That aligns with the way other HUD headsets can be manipulated: swiping up, down, left, and right on your screen by tracking correspondent eye and head movement.

Thrun also confirmed that the team is experimenting with making phone calls through the headset and notifying the wearer of upcoming events in his or her calendar, though the focus of Google's Project Glass, at present, seems to be on social sharing, such as taking photos and videos from your direct eye-line and disseminating that material online, presumably through Google's social network, Google+.

Finally, Thrun seemed somewhat down on the augmented reality aspect of Google's Glasses, or the ability of an HUD device to give you information about what you are looking at in real time. That could mean identifying the name and occupation of a person you're looking at through facial recognition, giving you pricing information from competing retailers about a product you're looking at, or providing phone numbers or opening hours for a building or store just by looking at it.

Of course, Project Glass is still a long way out from their actual release -- without giving a target date, Google has said that its glasses will not be available by the end of the year, contradicting a New York Times report from February -- so what Thrun was wearing may be drastically different from the final product.

What this interview really represents is the continuing build of public momentum and informational leaks that Google is letting out in the run-up to the launch of its Glasses. First, we had a concept video; then photos of Brin wearing a prototype; and then more concept photos of what the final product might look like. Now we have video of the Glasses in action. For Google's Project Glass, it is more and more looking like a matter of not "If," but "When."