You may have noticed some new little animations popping up in your Gchats when you're extra excited or "laughing."

The animations started out as an inside joke for Google's designers. Eventually, Google decided to release them to everyone who uses Gchat. They're "just for fun," Sanjay Mavinkurve, Google's Lead User Experience Designer for Hangouts (that's the new version of Gchat), told The Huffington Post in an email. If you try these and they aren't working, you might need to update to the new Google Hangouts in Gmail. Some of the Easter Eggs will show up for both you and your friend, and some just show up for the person typing.

Type these words into a Google Hangouts and find the little Easter eggs for yourself (this isn't an exhaustive list, btw. Google says it's going to keep adding more):

"We hope people find them, but want to make sure they don’t trigger too often," Mavinkurve said of the phrases Google chose to animate. "The goal is to make people smile and keep them surprised."

This one is actually based on a meme, Mavinkurve told HuffPost. The meme features a crying little girl with the words "I want a pony." The designers were joking around about the meme and someone put it into the code.

"Because one pony is never enough," Mavinkurve said.

"We had Hangouts users mistaking one of our emoji (the house with the tree) for a shy dinosaur hiding behind a house," Mavinkurve told HuffPost.

"It seemed a shame to not have such an emoji, so we added the Easter egg." See the resemblance?

This one is a reference to the term "bikeshed," which is an unnecessary investment of energy on trivial issues. Typing "/bikeshed" changes both your and your conversation partner's chat window another color. "Our team is dedicated to moving fast and staying focused on our priorities," Mavinkurve said. The team members would send "/bikeshed" to each other as a reminder to focus on what's important.

"Pitchforks bring a little snark and balance out the sunshine and rainbows from our Ponies," Mavinkurve said.

The Konami Code is a cheat code or easter egg that originated in video games but continues to appear all over the Internet. Here's how you type the Konami Code: UP, UP, DOWN, DOWN, LEFT, RIGHT, LEFT, RIGHT, B, A. After you do that in chat and press "Enter," your chat background will change. 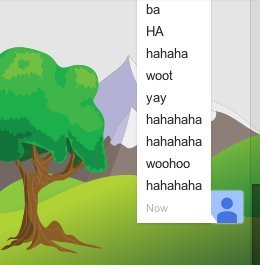 Have fun and see what other surprises you can find.