When one searches for "Homer," Google gets confused. Does it refer to the cartoon character? The Greek epic poet? The fishing town in Alaska?

The search engine spits back a list of blue links with information about all three, and displays images of Homer Simpson's bald yellow noggin, side by side with marble busts of the famous poet. Diving into the details about the cartoon, town or ancient Greek requires clicking through the sites shown on the page.

All that is about to change with a major upgrade to Google's search results that aims to eradicate ambiguity and make clicking on the sites shown in search results increasingly unnecessary.

In what it bills as one of its biggest launches in years, Google is leveraging its "Knowledge Graph," a database of 500 million people, places and things that Google has compiled over two years from sources such as Wikipedia, CIA World Factbook, Freebase and Google Books, to better connect vague keywords to real topics, summarize facts about the subject one is searching, and inject serendipity into search results. Google notes that by connecting billions of disparate points of data, its search results can present users with a more coherent narrative, thus providing a better understanding of the relationships between facts. "To put this into perspective, one of the biggest launches in the past was Universal Search," said Ben Gomes, a Google Fellow and vice president of the company's search group. "The Knowledge Graph features affect a larger fraction of queries than Universal Search. Users will see these features more often than they see Google Maps in Google Search.”

Much like its existing Google Maps feature, which displays detailed information about a business to the right of relevant links, Google's latest upgrade will deliver a brief profile of the queried subject, from an author's birthplace to a band's discography.

For example, rather than having to visit the Frank Lloyd Wright Foundation's website to learn more about the architect, Google will use Knowledge Graph to showcase biographical details about the architect on its own website, serving up his birthdate, spouse, children and images of his most famous buildings (See screenshot below). Of course, it's just a cursory glance at the architect -- but one that might satisfy many. 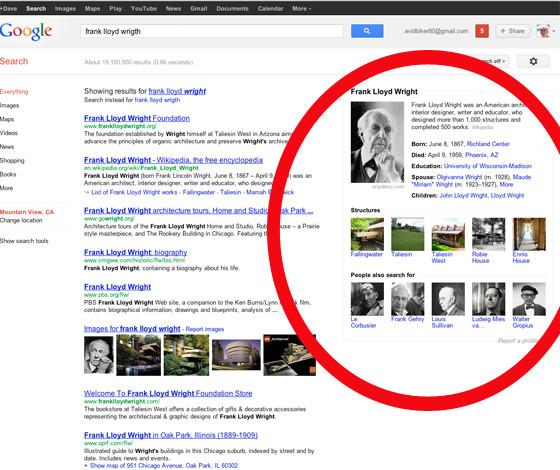 Google will customize the selection of facts to reflect users' most common queries relating to that person or place. The summary for astronaut Eileen Collins includes details about her space missions and total time in space, while the profile for Florence and the Machine displays the group's albums, upcoming gigs and band members. Clicking on terms included in the summary will take users to Google search results for those particular terms.

The change puts Google front and center, and promises to keep some users on Google, rather than diverting them to the websites where they could have found similar facts. It also promises to irk some sites, which could see traffic diverted from their own pages, as well as attract the attention of antitrust regulators, who are already investigating charges that Google cooked its algorithms to feature its own products ahead of competitors'.

The summaries will also add some surprises into users' search results, surfacing information users didn't know they wanted but may be interested in. Search for "The Simpsons" and the results include more cartoons that people "also searched for," such as "Family Guy," "South Park" and "Futurama." The change underscores the steps tech companies are taking to engineer serendipity and introduce us to ideas we might not have discovered otherwise.

"We can connect things to what you're searching for in ways you might not have expected," said Gomes. "In terms of search, this will greatly increase the amount of serendipity in search as you browse from a topic to things related to it."

Another new feature uses the Knowledge Graph to help users move from the an ambiguous query -- i.e. "Kings," which could refer to a hockey team, basketball team or television series -- to the specific topic they intended to search. Google will present a list of more specific queries to the right of its results, i.e., "Los Angeles Kings," "Sacramento Kings" or "Kings TV Show." (The screenshot below features an example of this feature using the term "Andromeda.") 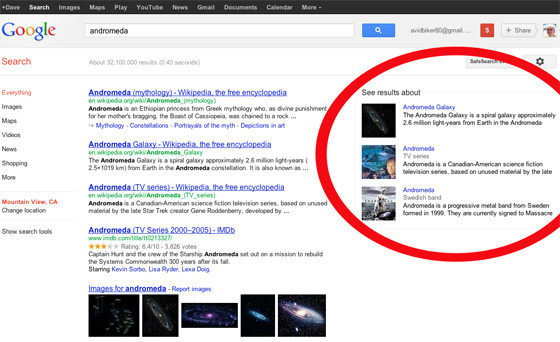 Gomes explains that Google hopes its Knowledge Graph will help the search engine answer more advanced questions that take into account specific locations and times of year, or require bringing together information from discreet databases. Among the "harder questions" offered as examples by Google are: "Where can I attend a Lady Gaga concert in warm outdoor weather?" and "What is the coldest lake in the world in July?"

The Knowledge Graph features are being rolled out to English-language users beginning May 16.

Check out more screenshots from the new feature (below). 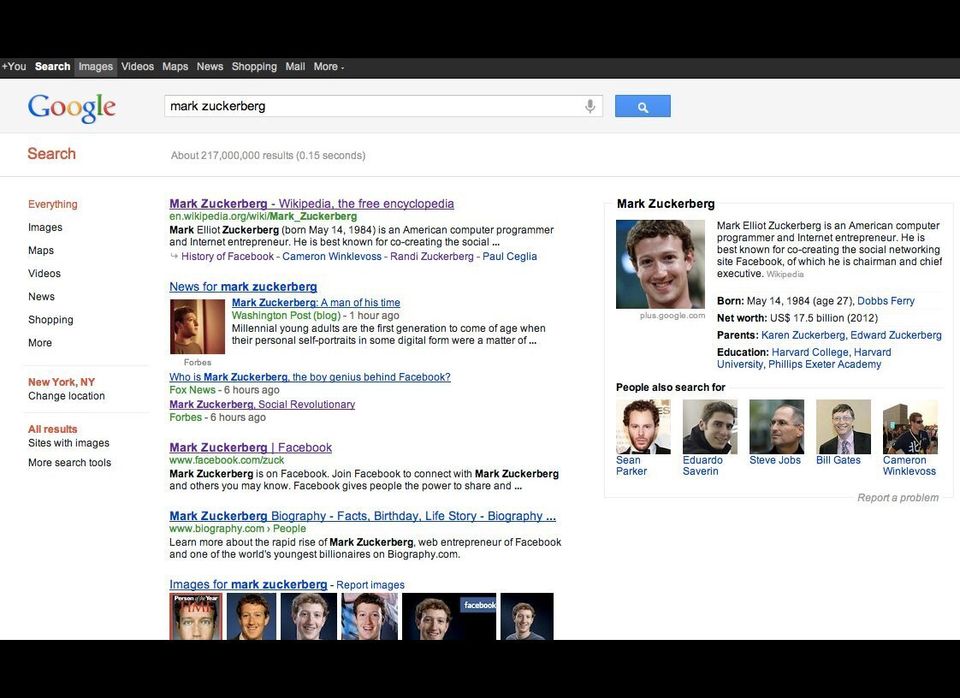