When users report a problem with Google Maps -- a missing roundabout, a road closure, a one-way street that's marked incorrectly -- it's Nick Volmar who hears them.

Volmar is a program director on Google's Ground Truth team, which has been an essential part of Google's efforts to create a comprehensive, detailed and accurate map of the world. To build Google Maps, Google relies not only on satellite imagery, data from third-party sources and information captured by its Street View fleet, but also on the thousands of corrections it receives daily from its users, which are manually consulted and addressed by Googlers like Volmar, who reviews up to hundreds of reports a day and updates Maps by hand.

For our "Life as" series, we spoke with Volmar about how Google improves its maps, the strangest report he's ever received from a user and what happens when Google must supplement digital data with boots-on-the-ground research.

What are you responsible for? I’m primarily responsible for working with a lot of the reported map issues that come in from external users -- analyzing the things they’re requesting, verifying their claims and trying to improve our maps using the different resources that are available to us internally.

So what kind of reports do you get from users? And how do you incorporate them into Google Maps? Users report things we may not have had in our maps initially, and we investigate their claims, working with other partners that are willing to give us data, like the Street View or satellite imagery teams, to map them. Somebody might say, “I live in Bakersfield and we actually have this new overpass that was built,” or “There are these new and important roads that have been created.”

Any reports about construction closures or other things that affect day-to-day driving we’ll also inject into our maps to make the more useful. When we get a report that there’s construction happening in California, for example, we’ll check the California Department of Transportation website to see how long the closure will last, then we put in some scheduled construction notice.

How many reports can you personally handle a day? It could be anywhere from tens to hundreds of corrections a day.

We try to use the imagery the Street View team has collected to resolve some problems more quickly. If Street View has driven an area, they know where the roads are, they know geometry of the roads and other things that are not available from satellite imagery. They have automatically extracted street signs, turn directions and other things we might have missed when we did the initial mapping effort. We can use those things to quickly resolve mapping issues.

What corrections are done manually? And with algorithms? My job involves a lot of manual data updates and entries. We haven’t yet developed an intelligent way of automatically defining what is actually being requested in user reports, what the user’s need is and how to address it. For other maintenance projects -- say, updating speed limits throughout a state or town -- we can use information that is going to be automatically detected through Street View technology and algorithms.

Do you ever have to send someone out to physically investigate an area to answer a question? If someone reports that there’s been a new housing community built in a town and we don’t have that data available to us to confirm it, we can ask the Street View team to go out and drive the road, so we can get the street names for the roads, draw in the roads and other things that we wouldn’t be able to see unless we had an on-the-ground picture and understanding.

How many user reports do you get a day? We get tens of thousands a day. During the holidays, if there are a lot of people traveling, we tend to get a lot more because people are using our product to navigate areas they’re unfamiliar with. 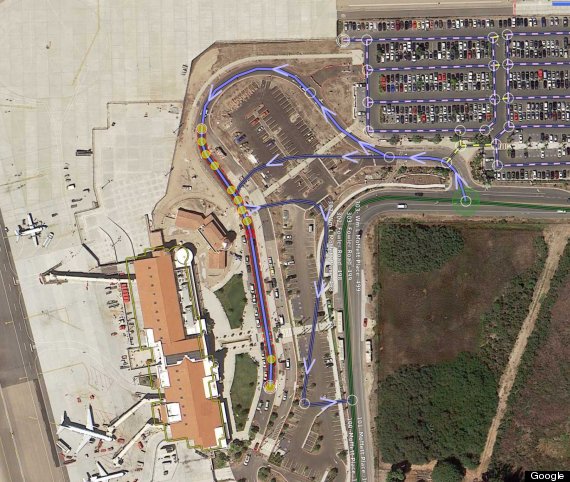 What Volmar, and other members of the Ground Truth team, see as they edit Google Maps.

How long, on average, does it take for a member of the Ground Truth team to respond to a user report? \Are there people responding to reports 24 hours a day, worldwide? It depends on the type of issue being reported, but once reviewed by someone on our team, the majority of updates go live on Google Maps within minutes. We have teammates around the world who can review and verify reports to ensure the quality of the map data.

Users can not only report problems with Google Maps, but make their own additions to Maps using Google’s Map Maker tool. How do you use the Map Maker data? Users are willing to spend lot of extra time to put in really detailed pieces of information on top of the dataset we’ve already provided. If they find a minor difference between the speed limit we’ve put down and what it actually is, they’ll go in and correct it. We hold ourselves to different standards: In Ground Truth, we’re trying to create really good map data, but Map Maker users are taking that and pushing it so much further.

What's the strangest report you ever received from a user? There are some fun "Easter Eggs" in Google Maps, like when you search for directions from San Francisco to Tokyo, one of the steps is "Sail across the Pacific Ocean." One user submitted a report that said sailing wasn't a very feasible suggestion as opposed to hopping on a plane.

This interview has been edited and condensed for clarity. See the rest of HuffPost's "Life As ..." series, which profiles tech world's unsung heroes, behind-the-scenes pioneers and unknown actors, here.