Google has often been accused of stealing ideas from Apple, most famously by Steve Jobs pointing to Android. And on first glance, Google's music player and cloud-storage locker Google Music seems like a rehash of the also recently released iTunes Match.

Well, it's not. There is no nuance here: Google Music is better than iTunes Match. GMusic makes iMatch totally redundant, a needless expense for a service that Google will give you for free, and that Google service matches iTunes Match (sorry) in nearly every important point of comparison.

Yes, there are many, many reasons to be pessimistic about several aspects of this new iTunes/Spotify/Napster/BitTorrent competitor from the tech giant who tests and rejects products like spaghetti. It is questionable, for example, whether the Internet needs another online marketplace for music and whether Google's music market has done enough to differentiate itself from iTunes and Amazon. The music recommendation engine in Google Music seems OK, but people who want to listen to music before purchasing it should just stick with Spotify and YouTube. The integration with Google+ is ... well, NASA just sent a rover over to that website and found no signs of life.

On the other hand, the Google Music locker, accessible at music.google.com, is a gutsy, aggressive swipe at an Apple service that was considered such an exciting breakthrough that, back in June, Jobs reserved it for his "One More Thing ..." announcement at the company's Worldwide Developer Conference. Apple probably thought it would be a real distinguisher.

Well, it turns out there's another "one more thing": The Google music locker holds 20,000 songs for free and can stream them to any Android or iOS device (or any device with a web browser, really).

Consider this: In order to use iTunes Match, you have to pay $25 per year. The number of devices from which you can play your music is limited (to 10), and all of those devices must have the iTunes desktop app. If you want to listen on your mobile device, it has to run iOS.

In order to use Google Music, you don't pay anything. There is no limit to the number of devices you can listen on. If you want to listen on your mobile device, you can download the free Google Music app, available now for Android and probably soon for iOS (if Apple approves it). Until then, if you want to listen to Google Music on a mobile browser, all you need is a web browser. Most mobile devices nowadays have web browsers.

So why would anyone use iTunes Match over Google Music -- aside from loyalty to Apple or pure ignorance about the existence of Google Music? The key differences between the two services don't swing the needle toward iTunes Match; they're inconveniences, trifles and petty critiques.

Argument one: Google Music takes days to upload a music library; iTunes Match takes minutes. This is Apple's knockout punch? Once everything is uploaded, who cares? Unless you need your entire music collection ready for that party across town IN TWO HOURS (note to self: pitch idea to Disney), this is a silly point of contention. Save yourself some money (or donate it to charity!), and wait a few days for your library to upload.

Argument two: iTunes Match plays all of your songs in high-quality 256 kbps AAC; Google Music plays them in whatever format they were downloaded. Most non-audiophiles don't care about the specific format of their music; most non-audiophiles can't tell the difference between MP3 and AAC and are quite happy with the quality of the music they own. Moving on.

Argument three: iTunes Match can hold 25,000 songs, while Google Music can hold only 20,000. So if you have between 20,001 and 25,000 songs -- if your music library falls within that golden range of tracks -- perhaps it is worth ponying up $25 to use iTunes Match. Or perhaps you can be realistic about your needs and choose a few thousand songs that you don't have to have available at all times.

What else is there? iTunes Match has a nicer interface than the admittedly oddly spaced Google Music homepage, but that doesn't seem worth $25. iTunes is also a more familiar interface to most; some people will find it inconvenient to learn how to operate a new set of functions. Understandable but unsustainable in the long run, especially as all data and storage moves to the cloud.

What seemed like a bargain a week ago, iTunes Match at $24.99, now seems like an outrage. Such is the fast-moving world of competitive tech. Simply put, iTunes Match either has to drop its price to free or offer an all-you-can-eat option like Spotify to justify its price and make it seem attractive next to Google.

The event at which Google Music was officially unveiled was advertised with the catchphrase "These Go To Eleven." While Spinal Tap did not make an appearance, Google really did give itself that little push over the cliff with its new cloud-storage service. iTunes Match got matched and surpassed. Now Apple needs one more thing to compete.

Google Music vs. iTunes Match: First Round Knockout For ... Google Music
Google Music: What You Need To Know(CLONED) 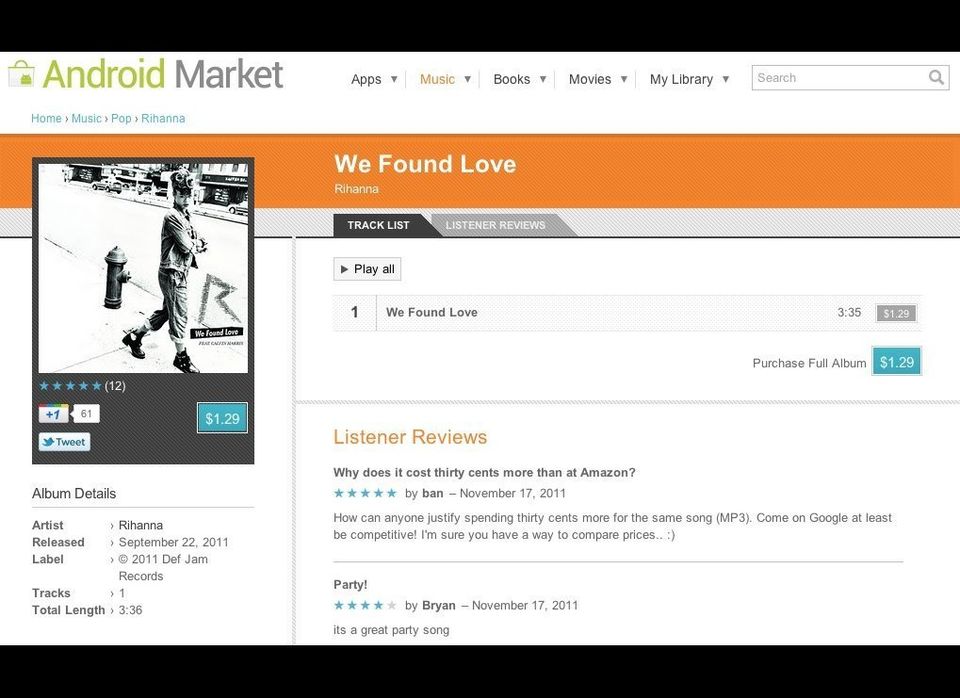 1 / 8
Online Music Store
Google has <a href="https://market.android.com/music" target="_hplink">built its music store into the Android Market</a>. Visitors to this content hub can browse songs, play samples and make purchases. Songs start at 99 cents. They're stored in Google's cloud-based music locker and can be streamed on the user's devices. Google will also let some songs be stored on a mobile device for offline listening. A Music Manager tool helps the user organize tracks on the desktop. Image via <a href="https://music.google.com/music/listen#start_pl" target="_hplink">Google Music</a>.