It turns out that when Google employees speak candidly about the National Security Agency, they curse. A lot.

Brandon Downey, a security engineer at the tech giant, didn't hold back in a Google+ post written in response to new allegations that the NSA successfully intercepts data sent between Google's own servers, without any warrant and without the company's knowledge.

Downey, who says he helped design the anti-hacking software that secured these data transfers, was not pleased:

I've spent the last ten years of my life trying to keep Google's users safe and secure from the many diverse threats Google faces.

But even though we suspected this was happening, it still makes me terribly sad. It makes me sad because I believe in America.

Downey noted that his thoughts in the Google+ post are his own and don't represent Google's. They did seem to echo Google CEO Larry Page's initial response to NSA scandal, titled "What the ...?,"

Mike Hearn, one of Downey's colleagues on Google's security team, seconded that sentiment on Tuesday:

I now join him in issuing a giant Fuck You to the people who made these slides. I am not American, I am a Brit, but it's no different - [British spy agency] GCHQ turns out to be even worse than the NSA.

We designed this system to keep criminals out. There's no ambiguity here. The warrant system with skeptical judges, paths for appeal, and rules of evidence was built from centuries of hard won experience. When it works, it represents as good a balance as we've got between the need to restrain the state and the need to keep crime in check. Bypassing that system is illegal for a good reason .

All emphasis is his.

Last week's revelation, which shows that the NSA is essentially capable of infiltrating Google (and Yahoo) data centers, appears to have irked Googlers more than any previous Snowden leak. According to that original WashPo report, two engineers with ties to Google "exploded in profanity when they saw the drawing" that described the data interception.

What was on that sketch that was so infuriating? A gloating smiley face from some unknown NSA spy. 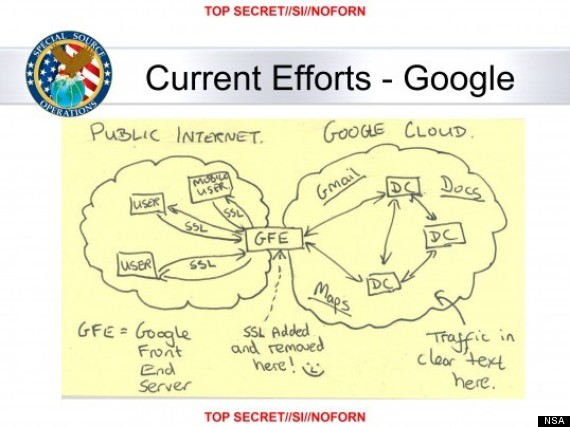