The image of a red telephone appears at the tops of the search list and includes a number for the National Suicide Prevention Lifeline.

The New York Times lists some of the trigger search keywords, among them, 'ways to commit suicide' and 'suicidal thoughts.' However, a query like 'I want to end my life' fails to elicit the suicide hotline information.

After testing a few keywords, the Google search page topped our results with the hard-to-miss icon. (See image below.) The suicide warning appears above the search results and is designed to be more eye-catching than advertisements.

The chief health strategist for Google told The Times that Google first applied a similar tactic to searches for 'poison control.' A concerned parent informed Google that it was difficult for her to find emergency numbers after her child swallowed something she thought might be dangerous. Google then streamlined results for Poison Control to display emergency numbers prominently.

ReadWriteWeb probes some of the implications of Google's hotline addition, asking if 'diets for fast food [are] next?':

Perhaps this could be a new direction - rather than simply offering results directly related to a user's query, or looking to personalize content by looking at what friends and peers are looking at, or even looking at a users history, Google could offer up a Devil's Advocate set of results on every query. Looking for a brand new SUV? While you're at it, why not consider this beautiful, used bicycle that will help save the environment? Cheap cigarettes? Didn't you mean Nicorette gum? McDonalds? Why yes, we do have a few diet programs and some instructions on healthy eating.

On previous occasions, Google has taken out advertising on its site when it has wanted to get a message across to its users. For example, Google purchased online ads in an effort to explain to users why an offensive image of Michelle Obama (since removed) was appearing and was ranked so highly in its Google Image search results. The Google ad, titled "Offensive Search Results," appeared directly over the pictures of the First Lady that showed up when users performed a Google Image search for "Michelle Obama." 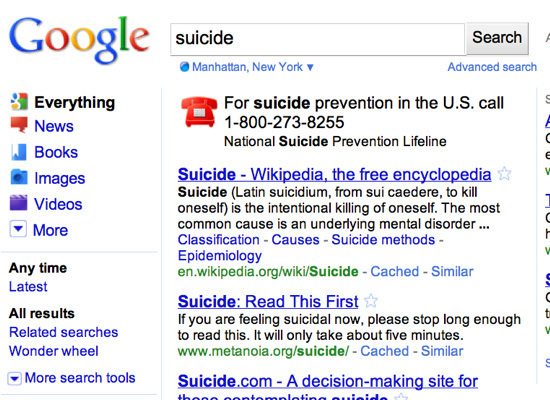