The pictures and videos I captured during my first trip to Palestine in October 2010 came at a cost that included several hours of detention and interrogations at the Tel Aviv airport, courtesy of the fine members of the Israeli military, Shin Bet and the Ministry of the Interior. After a 13-hour international flight, I was held for hours without food or water -- and I was forced to use the single-toilet restroom with the door cracked open and a roomful of men on the other side. And that was just the beginning of incessant stops, searches and other harassment I was subjected to throughout my trip because of the scarf I wear on my head (the non-Muslims in our group did not face the same treatment). What happened to me as a white, middle-class convert to Islam in no way compares to the daily oppression Palestinians endure. But the experience traumatized me nonetheless. It also strengthened my resolve to document the insanity that passes for occupation and to come home and tell anyone who would listen. Obviously, I do not speak for Palestinians; they tell their own stories best. But in my capacity as the media director of an organization dedicated to forwarding the Palestinian narrative, my experiences, which are strengthened by my photographs, play a role in educating the American public. 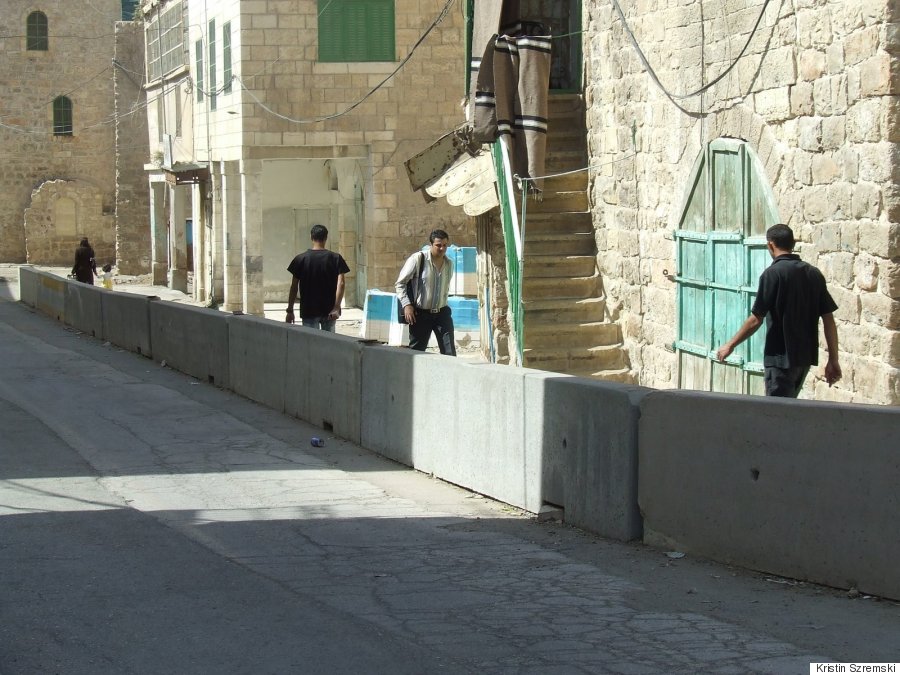 In 2010, Israeli soldiers barred me from crossing Shuhada Street for more than 20 minutes because of my headscarf.

Those pictures carry with them the heavy import of the truth. They are more than just snapshots from an "exotic" vacation. They are a documentation of the world's longest-lasting military occupation in modern history. When I returned from my trip, I uploaded my pictures and video on Picasa, owned at the time by Google, but which predated Google Plus. Google later absorbed Picasa and then redirected Picasa albums to its Google Plus site, according to CNET. Now, Google is killing off Picasa all together, several tech sites report. Storing pictures on Picasa was just like storing them on Facebook or Flickr. The platform allowed users to upload all their pictures, which would appear on the home page in a somewhat random order. Users also could organize their photos into albums, which is what I did. I spent hours creating at least 14 albums from this trip with names like "settlements," "unrecognized villages" and "checkpoints and security." This is useful when I need to incorporate pictures from my trip into PowerPoint or video presentations that accompany talks I give on the occupation. I've drawn from my albums numerous times in the past six years. But when I recently accessed my account, something seemed amiss. It was like coming home alone but sensing someone else had been there before me. That's when I found two strange albums. Albums I did not create. One was labeled "Trip to Israel, a story by Kristin Szremski." It was a slideshow comprised of pictures from my album called "Palestine." Worse, the other was called "Israeli Services." It contained one photograph of a street sign for an Israeli settlement called Ya'el, copied from my album called "settlements." I say worse, because the settlement industry is at the root of much Palestinian suffering. While my original albums remained intact, and Google spokeswoman Victoria Cassady later told me the auto-generated albums were only "suggestions" I could share or delete as I saw fit, I found the intrusion unacceptable. I do not need some bot suggesting to me how to best utilize my pictures. Outraged, I tweeted a screenshot, saying "Google Plus renamed my photo albums from "Palestine" to "Trip to Israel" and from "settlements" to "Israeli Services."

Google Plus renames my photo albums from "Palestine" to Trip to Israel and from "settlements" to Israeli Services pic.twitter.com/vgLfGGEvSh

After hundreds of retweets, Google Photos replied that it'd "like to help." In a private message, Google Photos said it would like to investigate the situation further and asked for greater access to my account. Obviously, in light of the unwarranted Google intrusion, I was not about to grant this request. Instead, I asked for a company spokesperson to clarify the issue for an article I intended to write. They sent an email for Cassady, who said she was the spokesperson for Google, Google Plus and Google Photos. Though several people on Twitter responding to my Tweet blamed Google for discriminatory algorithms, I didn't want to jump to conclusions. I asked Cassady via email whether someone could have hacked my account. I was clear I was writing an article about the incident and sent her a screenshot of the two albums.

She admitted via email, "We only autogenerated a title for the story on the right, not the album on the left, titled 'Israeli services.'" In other words, Cassidy explained to me, using "image recognition technology to determine landmarks that might appear in an image, photo metadata, and location history" as well as Google Maps, Google Photos created a slideshow and titled it "Trip to Israel, a story by Kristin Szremski." The "Israeli Services" moniker may have appeared because of a "bug," she wrote. To be clear, some of the pictures in the slideshow were taken in Palestinian areas of what today is called Israel, but there were also shots from East Jerusalem and Bethlehem. The flippant title negates the existence of Palestinians and Palestine. It disregards the stories of the families from the unrecognized village of Zbadet, who, though tax-paying Israeli citizens, receive no municipal services, such as electricity, water, education or health care, according to the Palestinian-Israeli NGO Association of Forty, which led us on a tour of the pre-1948 Palestinian village it monitors and which Israel doesn't recognize. It ignores the struggles of the Palestinian families I met while picking olives near the Sea of Galilee who do not enjoy the same rights and privileges that their Jewish counterparts do, even though they also are Israeli citizens.

When she answered my first email, Cassady said: "We have a feature that used to be called 'Stories' but has recently been incorporated into 'Albums.' It works by automatically creating a new album for you, including when you might have taken a trip. When we create these albums they may include suggestions for a title and/or suggestions for the places you visited." 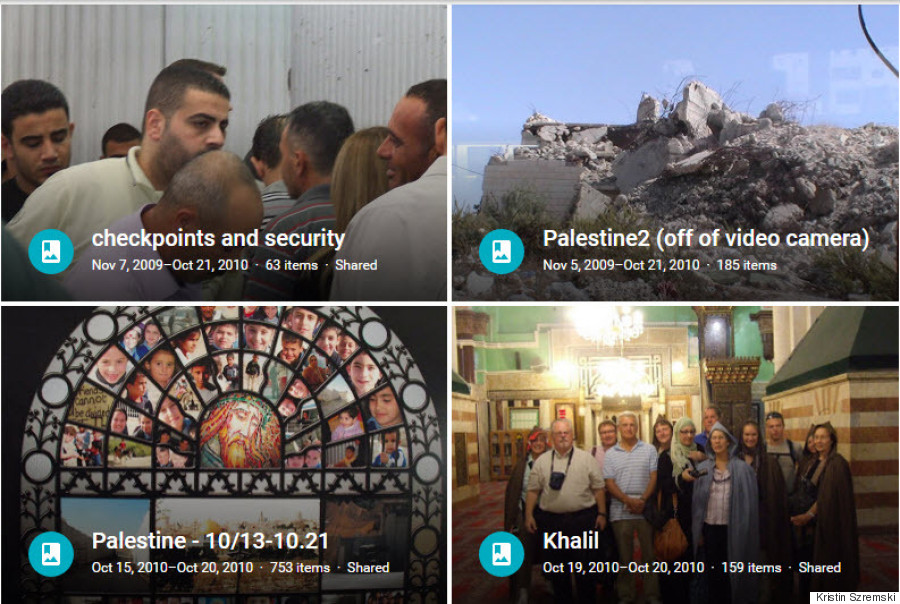 A screenshot of some of my Google Plus photo albums. The pictures for the Google-generated album named 'Trip to Israel' came from the album I named Palestine.

"Stories" was something the tech giant moved toward two years ago, according to a July 2014 article in The Atlantic. Wanting to enhance user interaction with their own photographs, the company decided to create "human storytelling," via a bot named Boswell. Using algorithms, Boswell would turn the stored snapshots into a "narrative biography" by using geotagged photos, Google Maps or by inferring location using "machine vision on certain landmarks." Whether Boswell actually ever drew breath is unclear, but Google Photos did and still does auto-generate photo groupings, whether they're called "Stories" or the new smart albums, launched in March 2016.

"We have a whole bunch of algorithms that we run over the data, and we basically try to figure out if we have enough signal that we have some clue of where you went," Google social web engineer Joseph Smarr was quoted as saying in the Atlantic article.

What happened to me is not the first time Google's intrusion went wrong. About one year after the Atlantic article, Google apologized when its photo identification program labeled black people as "gorillas." Google changed the term "Palestinian territories" to "Palestine" across all its platforms in 2013, Cassady said, and complaints about Google Photos generally deal with functions like adding or editing a photo, not content. (Google still labels the Israeli-occupied Golan Heights in Syria as Israel though).

And to be fair, Google isn't the only software giant with problematic software that discriminates, according to a report by Charles Pulliman-Moore in Fusion.

But that's no excuse. 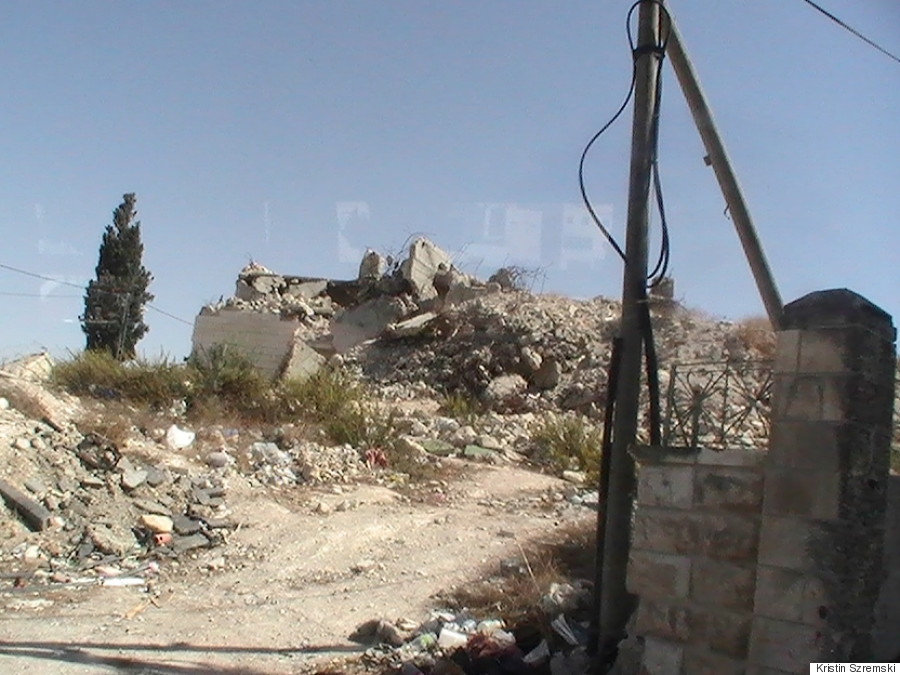 This demolished house lies in ruins outside East Jerusalem. I took this picture from our bus while on a tour with the Israeli Committee Against Home Demolitions.

I have spent much of the last decade tirelessly educating the public about the illegality of settlements, the theft of Palestinian land, home demolitions, bypass roads and settler violence. I have supported the Palestinian-led boycott, divestment and sanctions movement. I do this in attempts to help build grassroots pressure that one day will influence the creation of a more fair and balanced foreign policy for everyone who lives in that region. The two albums "suggested" by Google Photos are set on private, Cassady said. "You can edit them however you'd like or simply save, ignore, or discard them." I plan to delete them as soon as this issue is resolved to my satisfaction. Nonetheless, it is beyond offensive to see that after devoting my life to this work, the albums appeared in my account at all. Their very names disregard the conditions of Palestinians living and dying under occupation. Cassady apologized for the "offense it caused," and vowed to "look more closely at how we can improve the album suggestions we create."

"We're trying to present the essence of the thing," Google's Smarr said in the Atlantic article. "And, it is harder to distill the essence than it is to regurgitate the user's data back at them."

If it's so hard to "distill the essence," then maybe Google should best leave it alone. All I know is the Palestinian children that appear on Google's auto-generated album cover trusted me when we were playing under the olive trees that October day in 2010. Not only did Google Photos break that trust, it missed the essence of that afternoon and the reason for my trip entirely.