Despite a celebrated launch and a meteoric rise, social network Google+ may be faltering. Though the site continues to add new features and integrate with existing Google services, user engagement appears to have taken a tumble.

In the past two months, developers at 89n have noticed a significant drop in the number of public posts on Google+.

Check out a chart showing their data (below). 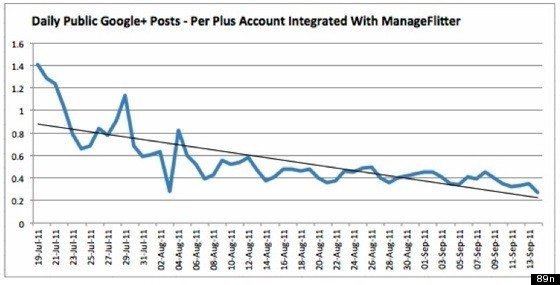 89n obtained their data by examining the 7,280 users who have integrated Twitter profiles with Google+ using 89n's ManageFlitter tool. It's a very small subset of the Google+ population, which comScore said had topped 25 million users in early August. Not to mention, 89n's data excludes posts that are shared privately.

TechCrunch advises readers to take 86n's data with a grain of salt. "86n isn’t exactly a research firm," writes TechCrunch, "and they offer little insight into their methodology for gathering and interpreting the data."

Nevertheless, we noticed a similar drop when looking at Google Insights to see who's searching Google+ (or Google Plus) in Google's Search engine. The results are clear: interest in Google+ is waning, at least among people searching Google for information about its social network.

Check out our findings (below).

Google+ (and Google Plus) vs. Google Maps:

When compared with searches for Facebook in the past three months, Google+ is barely a blip on the search engine's radar. What does this mean for the new social network? Does it mean that early adopters have lost interest? Does it mean that users are posting more content privately? The Huffington Post's Craig Kanalley suggests that, whatever is happening with Google+ engagement, its launch has actually been a boon to Facebook.

"Facebook comes away from at least the first months of this battle a big winner," according to Kanalley. "In fact, so far at least, Google+'s biggest accomplishment is improving Facebook itself."