Are you desperate to get onto Google+, the search giant's new social network? Don't be too desperate: a rash of fake invites are spreading on the strength of user desire.

According to Sophos, an Internet security vendor, false Google+ invites are making the rounds, leading users to click on links that lead not to the social network, but to pharmaceutical websites selling Viagra, Cialis and more.

"The messages look similar to the real emails that users may receive from friends who are already members of Google+," wrote Sophos researcher Graham Cluely. "The spammers are no doubt hoping that the email will be too hard to resist for many people eager to see Google's new social network, although just how many users will be tempted to buy drugs online is a mystery."

The scam, apparently the first to attempt exploitation of Google+, uses invites that look very much like the genuine article. It doesn't appear the links are related to a hack, but the scammers do redirect users to the pharmaceutical sites in the hopes of collecting a profit.

Check out a screenshot of the fake invite (below). Then, read about on how you can get signed up for Google +--for real. 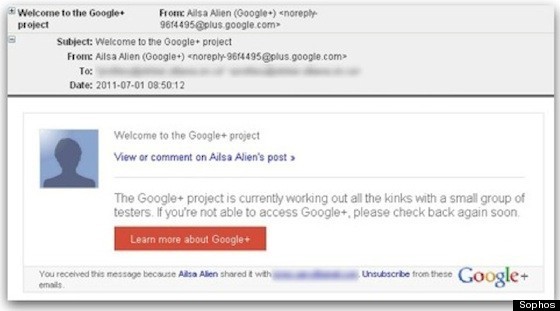