"You know that feeling you get when a piece of art takes your breath away, or when a friend stops by with unexpected gifts?"

That's what Google wants sharing on Google+ to feel like, and to that end, the search giant has announced a huge redesign of its struggling social network. In a blog post on Google's official blogspot, Google Senior Vice President Vic Gundotra laid out the bold redesign, which emphasizes larger photos and videos in the sharing stream and features a new customizable ribbon with all of the different Google+ sections that runs up and down the left side of the screen.

Though the redesign is already winning widespread praise from Internet commentators, there is still a question of whether or not many users will enjoy the fruits of Google's labors. Google has been hampered by accusations that its ambitious Facebook challenger is a "ghost town," and that after a period of rapid, widespread signups, with many on the outside begging for invitations for the social network, actual usage plummeted. As part of the redesign announcement, Google boasted that 170 million people had signed up for Google+, but daily and monthly usage numbers have been elusive and Google only offers statistics of users across all of its properties (including the ever-popular YouTube and Gmail).

In the face of sluggish daily adoption, Google seems committed to its still-nascent social network. Google has added several features that integrate a Google+ "Share" button across its many sites, and Google Reader and Gmail have both received redesigns in order to accomodate Google+ functionality. That has pleased the dedicated users of Google+ (of which there are, in fact, quite a few), though its changes have not yet attracted the worldwide, ever-returning users that Facebook and Twitter currently enjoy.

Will this slick new look for Google+ change things? Or will it take something else -- for example, the long-rumored Google+ app marketplace -- to turn the tide in Google's favor? Below, check out some more screenshots of the newly redesigned Google+. The changes should be showing up on your own Google+ profile soon; and hey, while you're there, why not add HuffPost Tech (and me!) to your circles? 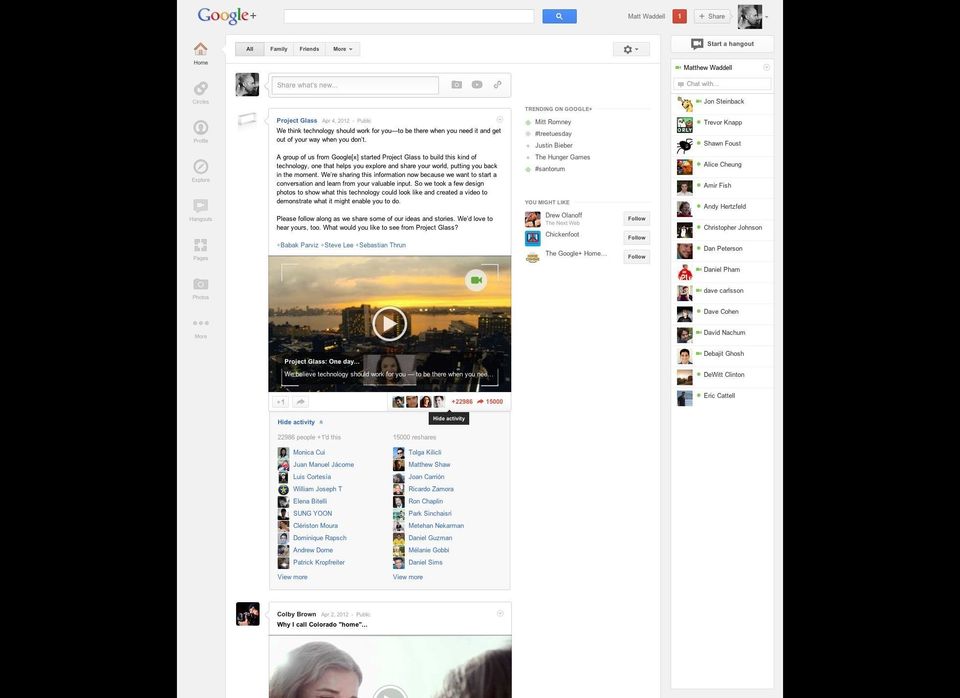