*See screenshot and video below* SAN FRANCISCO — Google Inc. can sift through more than a trillion Web links in a matter of seconds, but can the Internet search leader help people wade through their overflowing e-mailboxes?

That's the challenge Google will try to tackle Tuesday with the introduction of a tool called "Priority Inbox" in its Gmail service. CNN Money calls it a "mind-reading inbox," while Fortune dubs it an "email PA."

The feature relies on formulas devised by Google engineers to automatically figure out and highlight which incoming messages are likely to be the most important to each Gmail user.

Users who opt to turn on the Priority Inbox will see their messages separated into three categories. "Important and unread" e-mails will be at the top followed by messages that have been previously stamped with a star by an accountholder. Everything else appears at the bottom.

Switching back to the standard view of the inbox can be done with a click on a link along the left side of the Web page.

Google's e-mail analysis is based on a variety of factors, including a person's most frequent contacts and how many other people are getting the same message. The content of the e-mail also is factored into the equation.

Although it might unnerve some people, the notion of Google's computers scanning through the content of individual e-mails isn't new. Google has been doing it for years to determine what kinds of ads to show to the right of e-mails and to block junk e-mail commonly known as "spam."

With more than 100 daily e-mails pouring into some inboxes now, people now need help to identify "the bacon and baloney" along with the spam, said Keith Coleman, Gmail's product director.

Google helped create the information clutter six years ago when it introduced its free Gmail service with a then-unheard of 1 gigabyte of storage per account. Other e-mail services quickly expanded their capacity limits to remain competitive, and now most inboxes can store multiple gigabytes of information. LOOK: 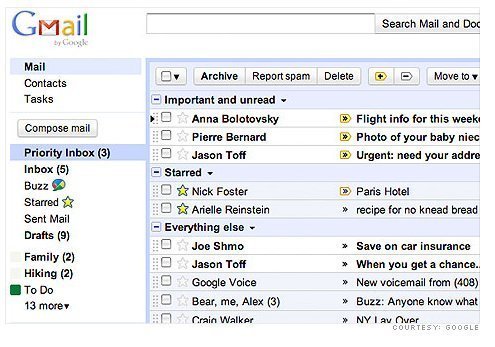