Google has added a rainbow to the end of its Search bar for certain queries.

According to CNET, Google made the colorful new addition in honor of Gay and Lesbian Pride Month, which takes place in June.

When users query Google with keywords like "gay," "lesbian," "transgender," "LGBT," "homosexuality" and many others, a rainbow appears wrapped around the Search button.

The unofficial Google Operating System blog writes that in past years, the search engine added a simpler rainbow-colored bar under the search field when users queried terms related to "gay."

As noted by CNET, Google has in the recent past taken a stand against California's anti-gay marriage act (Prop 8) and has contributed to the "It Gets Better" campaign for LGBT youth.

A Google representative was not immediately available for comment.

Check the multicolored search feature (below).

UPDATE: A Google spokesperson told the Huffington Post in an email, "During the month of June, Google is celebrating lesbian, gay, bisexual and transgender (LGBT) Pride. For some Pride-related search queries, we are showing a rainbow at the end of the search bar." 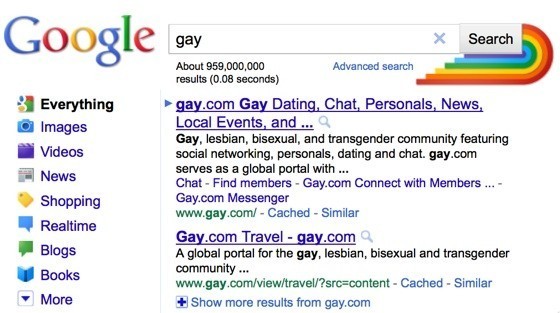