What would the internet be without Google? Sure, there are other search engines out there, but the world's biggest and arguably its best one serves up over one billion results out of Mountain View, Calif., every day to people in 146 countries.

Its founders' mission back in 1995 -- aside from not being evil -- was to implement a page ranking system based on the rules of academic citation. In academia, citations are like currency. Your publication will stand in higher esteem the more other publications cite it. As graduate students at Stanford University, Larry Page and Sergey Brin created their search algorithm with the idea of ranking pages based on how often other pages "cite" them -- or, in this case, link back to them.

And that's the very, very basic premise of the site that few of us could do without. But are you really getting the most out of it? Take a look below to find out!

Can you imagine that number? 60 trillion seconds is 1,892,760 years. 60 trillion dollars is almost 3.5 times the U.S. national debt. 60 trillion red blood cells is three times the number in your body. Maybe that's not helpful. Just know it's a lot.

2. And sometimes turns them into a game. 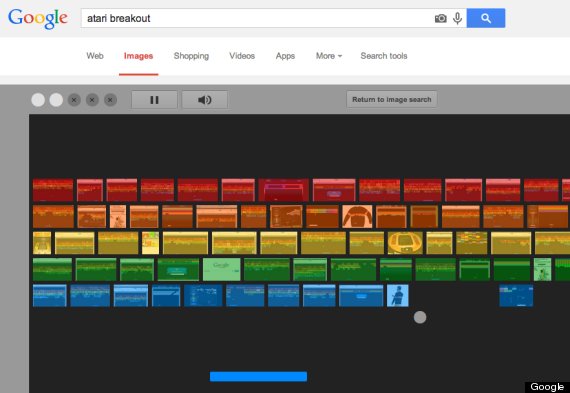 Type "Atari Breakout" into the search bar, and you'll see this easter egg created in honor of the game's 37th anniversary last month. Use your directional keys to control the paddle. When you advance to the next level, Google will perform a random search, using those images as bricks.

3. Find more about a certain picture by clicking the camera icon on Google Images. It brings up this box:

This gives you the option to upload an image from your computer or insert an image URL. If you're using Chrome, right-clicking on a picture will also give you an option to "Search Google for this image."

So next time you see an adorable dress on Pinterest with no credit information, use Google to track it down.

4. You can also narrow down an image search by clicking the "Search Tools" menu. 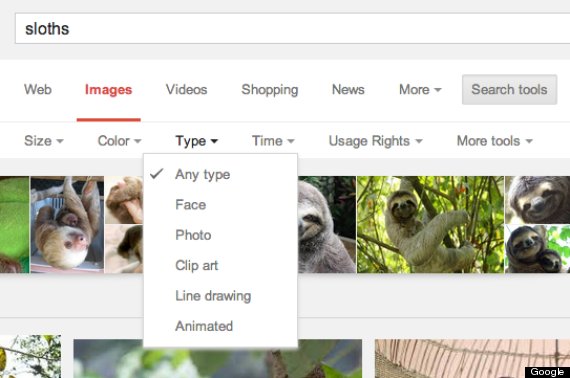 Looking for a black and white cityscape? Drawings only? Most recent photos of Beyonce's hair? You can even use Google to look for GIFs -- just select "Animated" under the "Type" menu.

5. If you're on a site with a terrible search function, make Google do the work for you.

Maybe you're spending a half hour searching for basic information on your school's crappy website. Typing in "site:harvard.edu," for example, before your query will give you results from harvard.edu only.

6. It can also help you filter out some other riffraff...

Use a dash, or "minus," to help filter out any unwanted search results. Typing "Paris -Kardashian" will make sure the gossip on Kimye's wedding plans stays out of your way as you plan a vacation.

Entering "filetype:pdf" before your search query, for example, will give you only PDF documents. Other common ones are .docx, .pptx and .xlsx. (Music files are a bit harder to look for, sorry!)

Enter "site:nytimes.com" to specify The New York Times. Enter "south american" -- in quotes -- for that phrase specifically, then "endangered" normally and "~species" to search related words, too, like "animals." Finally, "2010..2014" -- with two periods -- will give you results published only within that timeframe.

9. If a certain webpage is down, just search for it within Google's cache.

Say you need information on sloths. Because reasons. Entering "cache:en.wikipedia.org/wiki/Sloth" into the Google search bar will give you the static snapshot of the Wikipedia page Google has saved on its servers. That snapshot may be a little old, however, so if you're looking for up-to-the-minute news, the cache won't really help.

10. Google's your best friend when you need to get around paywalls...

Alternatively, you can use Google Mobilizer or Modules.

Typing "Google in 1998" into the search bar brings up a retro version of the site. Sadly, it doesn't actually function -- entering any other query into the old-school search bar will bring you back to the present.

Just type "time Sao Paulo" into the search bar and stop doubting your skills in basic addition or subtraction. (It works with any city, too!)

Speaking of times, if you want to know showtimes for movies nearby, just type a movie currently in theaters with "showtimes" and Google will bring up some options.

Or rise. Type "sunset Sao Paulo" or "sunrise Sao Paulo," for example, to find out.

14. Or which team is winning the game right now. 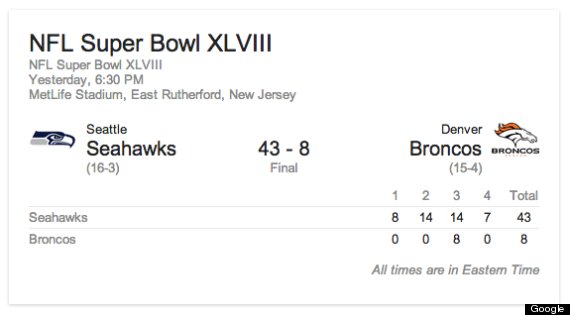 Typing the name of your team or "Seahawks vs. Broncos," for example, will give you the score. Google pulls the information from Stats LLC.

15. Speaking of games, here's another one you can play when you're bored.

Type "Zerg rush" into Google. A Zerg rush, for the uninitiated, is what it's called in the game StarCraft when you gather forces of alien arthropods known as Zergs to decimate the enemy. Double-clicking turns your cursor into a weapon against the oncoming Os -- Google's version of Zergs.

16. Listen to your fav musician right on your search results page.

Searching for "songs by Lorde" brought up the list above, along with a brief bio of the New Zealander. Clicking on individual tracks brings up YouTube music videos, with some songs available to play just through Google.

The button skips over the search results page, and all its paid advertisements. In 2007, former Google executive Marissa Mayer expressed reluctance to kill the button completely, since "it's possible to become too dry, too corporate, too much about making money."

18. Originally, the site was named BackRub.

BackRub? What? In 1996, Page and Brin created what they called a "web crawler" that operated on Stanford University's servers until it took up too much bandwidth.

19. And its homepage design is so sparse because Page and Brin didn't know too much HTML.

It wasn't because the two were proponents of minimalism -- until the "Submit" button was added, users had to hit their return key to perform a search, Mayer once explained in a 2005 talk. The copyright line at the bottom was only added after the site founders observed users staring at the sparse homepage "waiting for the rest of it to load," Mayer told Businessweek. It serves as a sort of signal that the page is ready to go.


20. But nowadays, Google can even solve all your math problems... 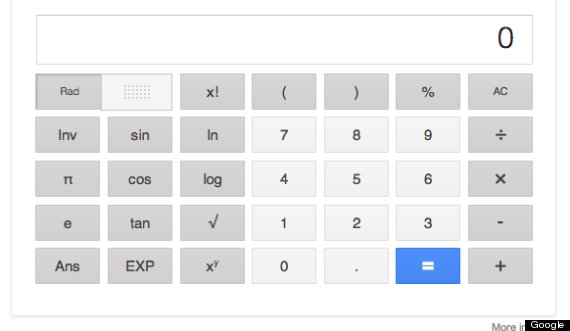 Do you even own a calculator anymore? Never fear -- type "calculator" into Google's search bar and this spiffy one will be provided to you. You can also just type in basic math into the search bar, like "60 x 12 million," and you'll get a numerical answer. (720 million!)

Typing "Celsius to Fahrenheit" gets you the handy converter above. Google can convert measures of mass, volume, speed, area, temperature and digital storage. It will also tell you the going rate of conversion between U.S. dollars and Indian rupees (or between any other currencies).

22. And show you what movies that one actor has been in... 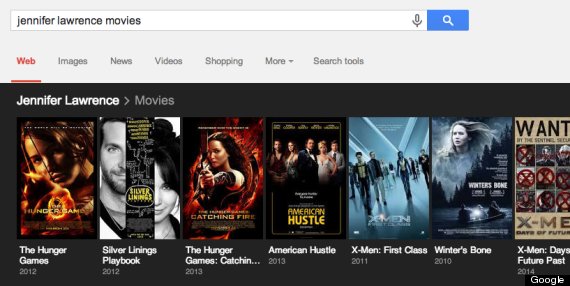 Typing "Jennifer Lawrence movies" into Google will bring up a nifty little slideshow of her filmography. Same goes for musicians' discographies -- try searching for "The Beatles albums."

23. Including their Bacon number!

Typing any actor's name plus "Bacon number" gives you their degree of separation from being in a movie with Kevin Bacon -- a game borne out of the "six degrees of separation" theory that any two people are linked by the acquaintances of no more than six others.

Just type "weather" plus your city into the search bar, and Google will compile the weather forecast from other sites in one neat package.

Typing "define:" before any word will get you a definition of that word, neatly spelled out as seen above. Pretty useful when you read everything online now anyway. Google also serves as a thesaurus -- just type "~" before a word -- and a spell checker. It will kindly ask "Did you mean...?" if you've spelled something wrong. Typing a word and "etymology" will give you the linguistic origins of that word.

Type "pizza" plus your zip code. You can also search for other types of takeout foods, restaurants by cuisine, bars or locate retail establishments like the nearest grocery or convenience store.

27. It's estimated that an ad on Google's homepage would cost $10 million.

But it's not for sale, Mayer once told Businessweek.

28. You can also set your Google homepage language to Klingon.

Or Latin. Or Pirate. Or one of the over 150 other languages available under the "Language" tab on your Settings page.

That's "I'm feeling lucky," for anyone who doesn't read binary.

Correction: An earlier version of this article incorrectly stated the product of 60 multiplied by 12 million. That'd be 720 million, not 72 million. 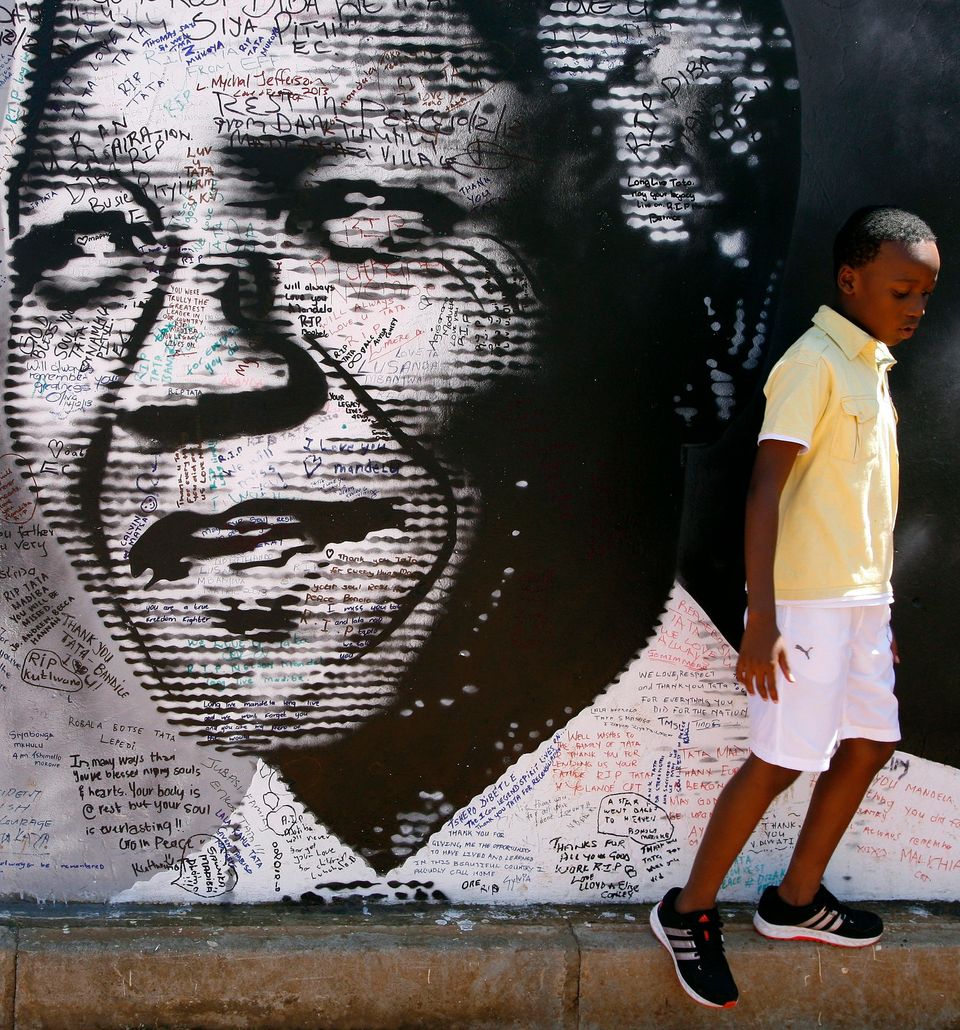