Stephen Colbert launched into a tirade against Google CEO Larry Page last Wednesday on the "The Colbert Report." Why? The company listed Colbert's height as 5'10" in his Google Search results, instead of the comedian's self-proclaimed 5'11".

"Larry, I demand a retraction, an investigation, an apology and a substantial cash settlement or I will see your ass in court," Colbert said. 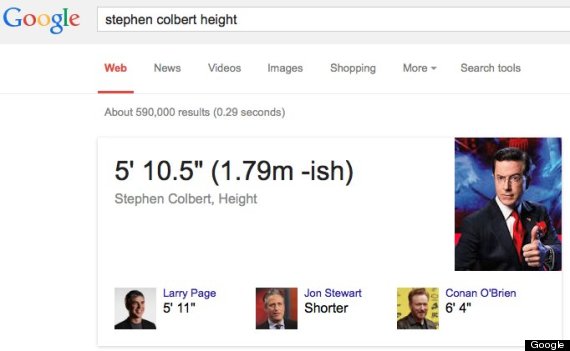 Google only gave him a half-an-inch.

As you can see above, he's also now compared to Page himself, who happens to be 5'11", and Jon Stewart, who is simply listed as "shorter."

Danny Sullivan of Marketing Land noted that while Google might have corrected its error, Apple's Siri still hasn't. The comedian appeared in last week's Apple event.