Google Street View, launched five years ago in the United States, has since then expanded to Europe, Australia, Asia and parts of Africa and has finally made its way to the Middle East. Israel became the first country to be added to Street View services last week, when images of the Holy Land officially went up on Sunday, April 20. Although the National Museum of Iraq in Baghdad is available on Street View, Israel is the only country to show its streets and cities (which thus far include Tel Aviv, Jerusalem and Haifa).

The Google Street View cars and tricycles could be seen snapping photos on the streets of Jerusalem, Tel Aviv, Haifa, Mitzpeh Ramon, the Kinneret and the Dead Sea since last September. In a technical process that took several months, the 360 degree images that were captured were processed and carefully stitched together in the U.S. Google is planning to release many more images of Israeli cities and streets in the future. 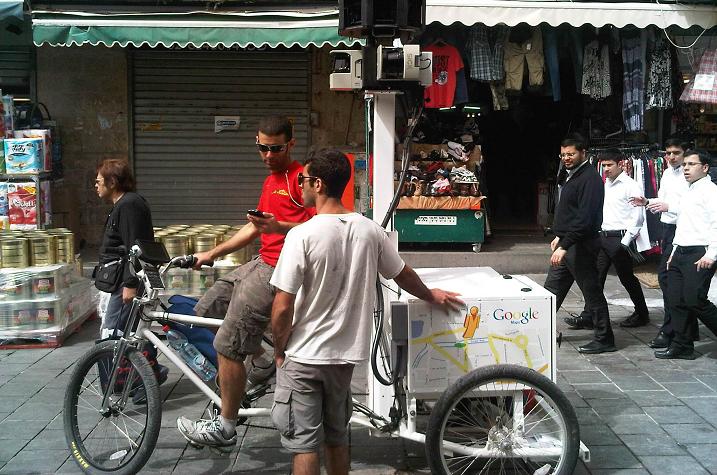 But Israeli government approval for Google Street View did not come easy.

Prior to the launch, Google consulted with Israeli security officials for months in light of concerns that terrorists could use the services to target civilians. In August 2011, Israel's Justice Ministry allowed Google to start photographing streets but asked that Street View provide the public a reliable way to request that further details be blurred after images were published online. Google Israel CEO Meir Brand explained that the Google images do not show sites in real-time and that Street View only photographed "public areas accessible to anyone." In addition, faces and license plates are automatically blurred before being published on Google Maps and users can always request additional blurring.

Military headquarters in Tel Aviv and the Prime Minister's residence in Jerusalem have been blurred for security reasons. In 2008, the U.S. Pentagon banned Google Street View from photographing U.S. military bases, when it was discovered that up close imagery of the Fort Sam Houston army base in Texas were available on Google Maps.

In the past, Palestinian Islamic Jihad (PIJ) has indicated that it made use of Google Earth technology to fire rockets into Israel. In an interview with the Beirut news agency, MENASSAT in June 2008, PIJ spokesman Abu Hamza explained that "when the militants fire missiles on Israeli targets, they do so in collaboration with the experts in the unit who specify the military and political positions. They also use Google Earth, which helps a lot."

PIJ contributed to the firing of thousands of rockets against Israelis in the south in past years and was responsible for numerous suicide bombings. The PIJ unit that makes use of Google Earth for rocket launchings is the cyber-war division of the PIJ's armed Al-Quds brigades.

Jerusalem Mayor Nir Barkat, however, emphasized the positive aspects of the service stating that, "more than three billion people of faith around the world are interested in Jerusalem and wish to visit at least once in their lifetime. The service will allow everyone who wants to come to Jerusalem to better plan their visits and to taste the city before they even arrive."

"Google Street View is an important tool to increase the number of tourists to Jerusalem," the mayor added. Jerusalem received a record amount of more than 3 million tourists in 2010.

According to a Google statement, the imagery of "Jerusalem, Tel Aviv-Jaffa and Haifa includes sites of interest such as the Muslim, Christian, Jewish and Armenian quarters of Jerusalem's Old City, the Via Dolorosa, Church of the Holy Sepulcher, Western Wall, Mount of Olives, old port of Jaffa, and the Baha'i Gardens."

Residents in Jerusalem exhibited mixed feelings about seeing the Google Street View vehicles throughout the city. "Hopefully, Street View will give the world the chance to see Jerusalem beyond the conflict," Itzik Yarkoni told Tazpit News Agency. "The headlines always like to show the tensions in this city. Now people will get the chance to see aspects of normal life here and what we usually experience."

Sarah, who moved to Jerusalem in the past year, disagrees "I was freaked out when I first heard about Street View in Israel. It makes me nervous for security reasons. I'm sure there will be tourists who will make good use of this technology but what about the terrorists who can also use it?"