As our students prepare to graduate into an exponentially changing economy, there's one skill that often goes unchecked in the development of Common Core curriculum: the ability to think, act and communicate globally.

This means more than learning the history of another country or speaking and writing in more foreign languages. It means much more than any test could measure.

Google has just released the Connected Classrooms initiative which uses the power of Google as a connecting superpower to link students to the real world for in-school field trips. 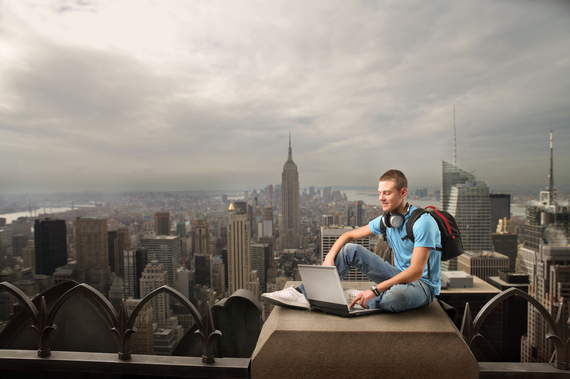 Yes, let's not compare a virtual field trip to a real one. Students can never feel the slimy tentacles of an octopus or float in zero gravity, even through an Apple retina screen. But, for the first time in history, some students may have access to information and exposure to a world their parents could never have.

On top of saving field trips in lieu of budget cuts, this platform uses the social-media engine Google Plus as a medium to connect students to real people doing real life-changing work. This is more than a field trip. It's the ability to break down socio-economic barriers and give students of all backgrounds the ability to see what the rest of the world is doing in a way that's never been possible before. All they need is a computer and some wi-fi.

The first of the these field trips linked students from several schools around the world as they chatted with astronauts in space, marine biologists at zoos, along with students from the U.S., Somalia, and Pakistan taking part in an active discussion on gun violence one year after the Sandy Hook tragedy thanks to a partnership with Global Nomads Group.

Before long, I imagine Barack Obama hopping in on a Google in-school field trip that takes students through a tour of the White House or Air Force One.

Or Jamie Oliver opening up his kitchen to have a live cook-off with students from around the world. Which global dish to prepare? There's too many!

Or Elon Musk of SpaceX, sharing the future of space travel with students of all backgrounds, allowing kids who couldn't afford a bicycle to see inside a trillion-dollar space shuttle or digitally push the ignition button of a launch.

Or Richard Branson, taking students on a tour of Necker Island and having a Q&A to help young social entrepreneurs grow -- much like what he has been doing with Virgin Unite.

Malcolm Gladwell taught us the value of 10,000 hours. It takes 10,000 hours of high quality practice with access to needed equipment to become an expert. As he put so well, "Success is not a random act. It arises out of a predictable and powerful set of circumstances and opportunities."

Bill Gates and Steve Jobs showed us what having access can become. If neither of them had access to a computer, they would not have had the ability to start their 10,000 hours and become who we know them as today.

So, let's welcome our students into the garage where Wozniak and Jobs worked to build Apple or walk through the green pollution-free city of Masdar that I bet you didn't even know exists. Let students into the world outside the brick and mortar of a school building and into the exciting world of tomorrow.

I'd love to hear your thoughts and, of course, if you have any great ideas for an in-school field trip Google's Connected Classrooms needs to take part in, let me know @markwguay.