You'll be able to make video and voice calls from within Google Talk over Wi-Fi, 3G and 4G data connections. It looks like a pretty slick implementation: text chats from the person you're talking to will be overlaid on the video, and you'll be able to pause the video while maintaining audio to navigate your phone if needed. Because the voice and video is transmitted over the phone's data connection, Google Talk's video and audio chatting won't count against your cell phone plan's minutes.

iOS users looking to video chat over 3G will need to use Skype or Fring; FaceTime requires users to be on a Wi-Fi network.

Android 2.3.4 will be rolled out as an over-the-air update to Samsung Nexus S users "in the next few weeks." If you're a user of another Android device, Google isn't releasing any timeline for when you'll be able to get the video chat features. 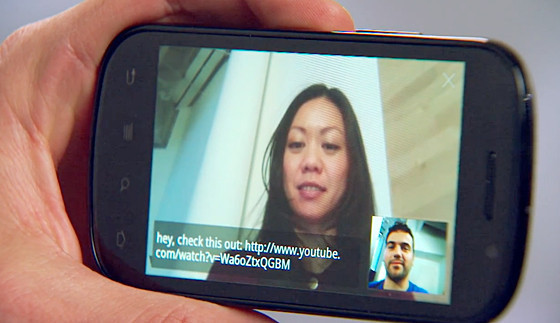