Law enforcement is asking Google for its users' data more than ever -- and most of the time, they aren't getting a warrant first.

That's the takeaway from a Wednesday update to the Google Transparency Report with information that breaks down for the first time how often the FBI and local cops use a subpoena, as opposed to a warrant, to snoop on Google users' information.

Google has been disclosing requests from law enforcement for the past three years, making it one of the few email providers to do so. In that time, the number of requests has steadily ticked up -- no huge surprise, according to the company, since it has more users and more data.

The chart below shows how many user data requests Google has received every half-year, and how often it has rejected those requests: 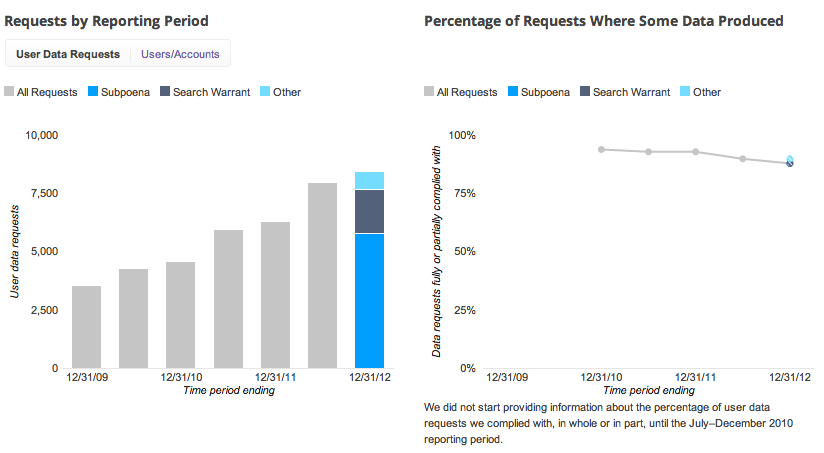 In many cases, the users or accounts targeted in the second half of 2012 weren't even protected by the warrant process, which requires a judge agree that investigators have probable cause.

Because of an obscure 1986 statute, law enforcement often does not need to go to a court to get access to information that could identify Google's users: Only 22 percent of the time were data requests to the company received as warrants. Instead, cops and FBI agents are often free to write out administrative subpoenas simply stating that they think metadata -- like who you're emailing -- could be useful to their investigations.

Not all of those requests are in pristine legal order. As Google's director of law enforcement and information security revealed at a conference on Tuesday, the company routinely receives requests for Facebook's data. Because of that and other mistakes, Google refuses to comply with 12 percent of the subpoenas and search warrants it receives, he said.

The company rejected nearly four times as many requests as it did in the second half of 2010 -- a trend that worries privacy advocates.

"Hat tip to Google for releasing this important information," Greg Nojeim, a senior counsel at the non-profit Center for Democracy & Technology, said in a statement. "This shows not only that law enforcement demands are skyrocketing, but that proportion of those demands that are inappropriate may also be increasing."

The Department of Justice has been reluctant to reveal how often it uses its power of subpoena to obtain user information across sites. But numbers obtained by the American Civil Liberties Union and released in September show a similarly sharp increase in the pattern of warrantless electronic surveillance of email and Internet communication.

A coalition of privacy advocates and Internet companies like Google wants to reform the law that governs searches for electronic data, the Electronic Communications Privacy Act, to make it harder for law enforcement to snoop online. Senate Judiciary Chairman Patrick Leahy (D-Vt.) passed a bill to do so out of his committee in November, but advocates are still searching for a strong sponsor in the House of Representatives.

Elsewhere in the world, governments are also trying to get their hands on more emails and more data. According to the report, Google received 21,839 user data requests from foreign governments in the second half of 2012, a significant increase from the 18,257 it got in the same time period the year before.

The chart below shows the ever-expanding number of user data requests Google is receiving -- and increasingly rejecting -- around the world: