**See update and demonstration video below**

Google Wave, a highly-anticipated new communication and collaboration tool, is being released to 100,000 new users for testing on a wider scale.

The new open-source Google application -- which a Googler describes as "magical" in the video below -- promises to offer a new way for people to interact and work on the web. According to CNET, Google Wave blends e-mail, instant messaging, social networks, and workplace collaboration.

Here's a picture of what Google Wave can do: 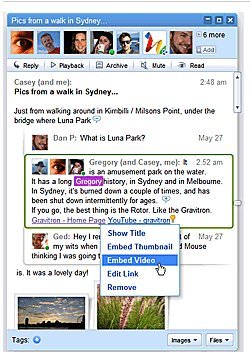 Soo..what's a "wave"? Live, shared, and equal parts conversation and document, Google says. Still confused? What to know more? See the video below for a better idea, or check out the "About Google Wave" site.

Google is granting access to the Wave to 100,000 users, although apparently more than 1 million people clamored to be in the test group.

UPDATE: A Google Wave invite was found for sale on eBay, and had attracted 19 bids, pushing the price up to $70, according to Mashable.

CNET reports Google Wave is still a year away from launching a stable, bug-free Wave.