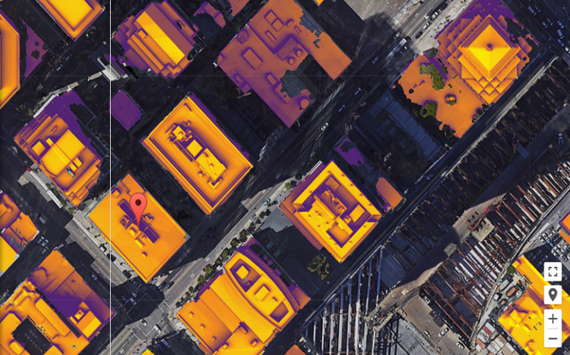 This Project Sunroof screencapture shows rooftops in San Francisco's financial district, including the national headquarters of the Sierra Club (the one with the arrow pointing at it). The lighter the color, the more sunlight they receive. | Image courtesy of Google's Project Sunroof

The image above shows the roof of the national headquarters of the Sierra Club on 85 2nd Street in San Francisco. It was produced by Project Sunroof, Google's new solar mapping tool, and it  gives a near-instant estimate of our roof's solar power potential (we don't have solar now because we don't own the building). By simply typing in your address, you too can get an idea of the savings your household might expect after investing in photovoltaic panels. Launched last month, the project currently calculates for structures in San Francisco, Boston, and Fresno, but it will soon expand, piggybacking on Google Maps' satellite data combined with weather information, 3D modeling calculations, and area-specific price and incentive databases.

The good news is that the price of solar panels continues to drop due to increased production and technological advancements. Nevertheless, the upfront expense of purchasing a home system continues to bar many households from joining the clean energy movement. The cost predicted by Project Sunroof for a 300 square foot installation in San Francisco is a whopping $16,761. Google predicts this setup will produce enough energy to replace 96% of the electricity used by a consumer whose average monthly bill is $125. According to the U.S. Energy Information Administration, California's average monthly bill is lower than that-about $90-so even fog-inundated Bay Area residents could potentially offset most or all of their electricity use with a system this size.

If, like many, you just can't foot the initial bill, Google's search tool also estimates how much it would cost a household to lease or loan a solar array. Called a power purchase agreement (PPA), this model is being offered by many companies as an alternative for those unable to own the rig outright. The solar service provider installs their own array on the customer's property, and the resulting power is purchased by the customer. Project Sunroof's estimate to lease an an array the size of the one pictured above is about the same as California's average monthly electricity cost, at $91 per month for a San Francisco resident.

Electricity prices have risen in the last decade,  and analysts like those at the Deutsch Bank predict they will keep climbing. The 2013 national average price for traditional electricity was 12.22 cents/KWh, but some states pay up to double this, with Hawaii topping the chart at 28.56 cents/KWh.  Meanwhile, the Deutsche Bank report calculates unsubsidized solar electricity costs only 8-13 cents/kWh when the expense of the equipment is averaged over its expected life (typically 20-25 years). Adding federal tax credits and other regional solar incentive programs into the equation further lowers prices.  So you might not save money the moment your panels are plopped down in the sunshine, but your long-term outlook for power that's cheaper and sustainable is bright.

Even if solar power has to remain on your green living wish-list for now, this new online resource is still pretty cool. Quick and simple predictions for savings over time allow us to see the potential that solar energy offers--$23,000 over 20 years for our theoretical San Francisco system. As solar prices continue to drop, hopefully more and more of us will be googling ourselves--or at least our rooftops.