Have you ever Googled Google on Google? It's more common than you might think.

This strange search trend is becoming more and more popular over time, as evidenced from the graph below. Google users Googling Google on Google seems to most happen when Google is in the news, which makes sense.

Most recently, the release of Google executive Wael Ghonim in Egypt led to a spike in Google searches for "Google." 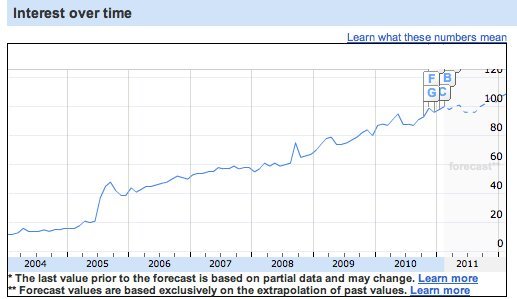 So why do people do it besides the news? Well, for one, maybe they're trying to have some fun. Maybe they just want to see what results would come up. Or, maybe, they've heard the rumor that Googling Google breaks the Internet.

Seriously. If you check forums, such as Yahoo Answers, questions are asked based on the rumor like this one: "Is it true you can break the Internet by googling google?" The top answer encourages the questioner to try Googling Google, and then adds, "However, I heard that if you yahoo yahoo, you'll die in 7 days."

But the best answer to the question is on WikiAnswers. In response to "Will Googling Google really break the Internet," someone says the following:

Another possibility for the trend: in some Web browsers, like Firefox and Safari, some accidentally Google Google in a search bar at the top simply because they are trying to access the Google website. The same may be true for some mobile browsers.

These are some reasons people might Google Google. Let us know in the comments if you have your own theories and we'll add some of the best ones to this post. And make sure you take our poll below!

Oh, and what comes up when you Google Google? Naturally, Google is the first result (surprise, surprise). Google Images, Google Maps and Google Video come next, followed by the Google Wikipedia page.