On the first night of speeches at the Republican Convention, Obama was mentioned twice as often as Romney, even with Ann Romney's penultimate address on her love for her husband.

HuffPost Off The Bus bloggers used the new Convention Mention Meter to track talking points in real time, showing Romney mentions occurred a third as often as Obama mentions for much of the night. Final tallies show roughly equal mentions of Romney, wedge issues, and patriotic platitudes from the stage. 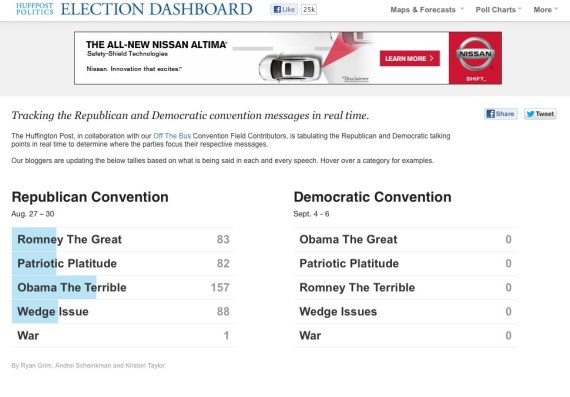 Wars in Iraq and Afghanistan were mentioned once by Artur Davis, a former congressman from Alabama and one-time Democrat, and Scott Walker threaded Romney mentions throughout his remarks, which was unusual -- most speeches tagged Romney praise on at the end.

Overall, Romney mentions were low, as aspirational party wishes were not tied to the candidate. Gov. Nikki Haley of South Carolina said, "We deserve a president who will strengthen the military," in a list of other deserved presidential qualities that were not attributed to Romney until the end.

Rick Santorum "shook the hand of the American Dream. It has a strong grip." Twenty-two other mentions of hands, or pairs of hands, appeared in his speech, not including those of "born and unborn" children.

Ann Romney wanted to talk about love, moms holding the country together, and how Mitt makes her laugh. She closed by asking the audience to let Mitt walk them home from the dance, referring to the night the two met in high school, and made one of her last Mitt mentions count, promising, "No one will move heaven and earth like Mitt Romney to make this a better place to live."

The Convention Mention Meter will be updated live in real time throughout the GOP and Democratic conventions.