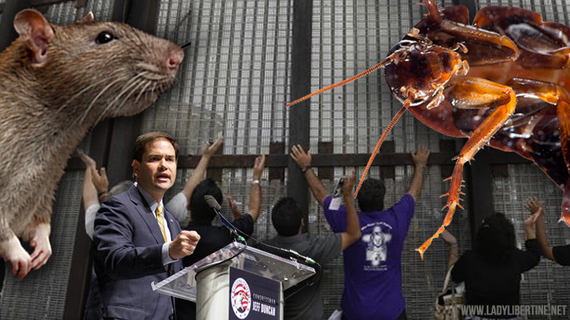 During a focus group led by GOP pollster Frank Luntz at the South Carolina Freedom Summit, the mother-in-law of Citizens United president David Bossie compared immigrants to rats and roaches, to the delight of the audience. Bossie is the organizer of the summit, one in a series of cattle calls for GOP presidential hopefuls.

Asked by Luntz to give advice to the these candidates, she said:

One man, one vote. People are comin' in this country across the borders like rats and roaches in the wood pile. We've got a state like Minnesota that says it's not our business to check 'em out, we just register 'em. We've got to get control. That's what they need to know.

Her comments drew laughter, whistling, and applause. Afterwards, Luntz asked the audience if they would vote for Bossie's mother-in-law for president, which drew louder cheers and applause.

These sentiments were not outliers. No stranger to making controversial anti-immigration remarks himself, Congressman Steve King told the crowd that he would make a concession on the issue:  "every time we let an immigrant in, we'll deport a Leftist." King was also a co-host at the Iowa event of this series.

Immigration has become a thorny issue for the Republican Party ahead of a 2016 race that could hinge on the Latino vote. For that reason, many regard Marco Rubio, the son of Cuban immigrants, as the GOP's best chance to win the presidency. Rubio also spoke at the South Carolina Freedom Summit, but he did not address the issue... Wonder why?

Watch video of the rats and roaches remarks here.