How would President Mitt Romney have responded to the global Ebola threat? Or President Ted Cruz? Dropping the hypotheticals, what about House Speaker John Boehner, who is not just the current highest-ranking Republican in the U.S. government, but second in the line of presidential succession?

All three GOP leaders are parroting Rush Limbaugh and Donald Trump's call for the United States to fight Ebola by banning incoming flights from West Africa. This ill-thought out, half-baked idea would encourage people who might be infected with the deadly disease to circumvent the ban by traveling to other countries first. Just as Thomas Eric Duncan, the first patient diagnosed with Ebola in the U.S., traveled from Liberia to Belgium before flying into Dallas two weeks prior to his death. 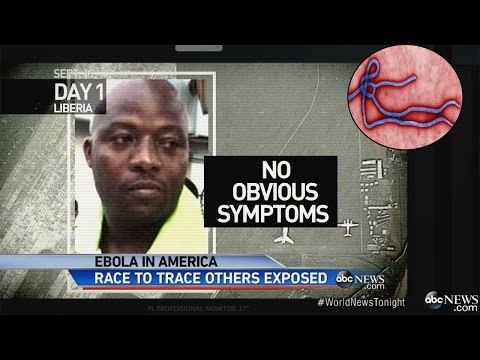 Potentially infected travelers could then enter the United States without being properly screened or quarantined at domestic airports. Which in turn could exponentially increase the number of U.S. Ebola cases.

This preference for demagoguery over common sense is one of the many reasons American voters rejected Republican presidential nominees in 2008 and 2012. And why a Republican takeover of the Senate in this year's midterms could make it harder for the U.S. to contain the current Ebola outbreak.

Campaigning for Republican U.S. Senate candidate Scott Brown in New Hampshire this week, Mitt Romney said, "I haven't been briefed on all the reasons not to close down the flights, but my own reaction is we probably ought to close down the border with nations that have extensive Ebola spreading and that means not bringing flights in from that part of Africa." Maybe Romney skipped the briefing and instead read Trump's recent tweet on the subject, when he called President Obama either "stupid" or "arrogant" for not instituting a ban. Which was only Trump's latest idiotic pronouncement on the subject.

Unless travel was banned to the U.S. from every country that has not itself banned travel from Ebola-affected countries, a West African travel ban would encourage people who are potentially infected with Ebola and trying to reach the U.S. to do so via connecting flights.

Unfortunately, public health officials haven't stressed this point enough. When CDC Director Tom Frieden was questioned on October 2 about the government's Ebola response, he primarily talked about how a travel ban would affect the flow of health workers travelling from the U.S. to help stop the outbreak. "The approach of isolating a country is going to make it harder to get help into that country," Frieden said. "It's going to make it harder to get people to respond because they're not going to want to come out. They're not going to be able to come out if they go in." 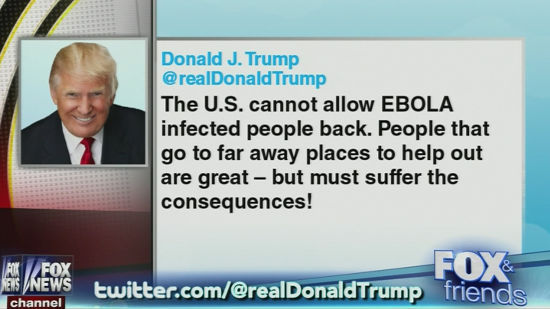 This reasoning makes perfect sense, yet doesn't drive home how a travel ban wouldn't work and could actually lead to increased U.S. Ebola cases if infected travelers arrive in the U.S. from other countries. When summoned before a House panel earlier this week, on October 16, Frieden finally made the argument clear. "We won't be able to check (individuals) for fever when they arrive. When they arrive, we wouldn't be able to impose quarantine," he said.

But his words fell on deaf ears. Top Republicans on the House Judiciary Committee responded with a letter to President Obama calling for... no surprise... a travel ban. "We have listened with interest to the arguments articulated by officials within the administration in opposition to a ban on travel from affected countries," said committee Chairman Bob Goodlatte, R-Va., and border subcommittee head Trey Gowdy, R-S.C. "Unfortunately, such arguments seem to have little, if any, merit."

In their haste to exploit public fears over Ebola and whip up anti-Obama sentiment for the midterms, right-wing Republicans and commentators have been competing to see who can come up with the craziest theory to explain why the Obama administration hasn't yet followed their brilliant travel ban advice.

Writing in the tycoon-funded Fiscal Times, Fox News columnist Liz Peek blamed Obama's supposed "ambition to be a hero to Africa" and alleged jealousy over George W. Bush's approval ratings in Africa for why there was no ban in place.

Louisiana Governor and probable 2016 GOP presidential candidate Bobby Jindal was one of the first GOP officials to call for a ban. In an October 3 statement, he pontificated, "The Obama administration keeps saying they won't shut down flights. They instead say we should listen to 'the experts.' In fact, they said it would be counterproductive to stop these flights. That statement defies logic. How exactly would stopping the entry of people potentially carrying the Ebola virus be counterproductive?"

Rush Limbaugh, as always, outdid them all, by claiming it was either "political correctness" on the part of the administration, or that Administration officials secretly want Ebola to spread in the United States, as payback for America's involvement in slavery.

How despicable. Limbaugh commands an immense public platform, able to reach more than ten million listeners directly through his national radio show. Donald Trump is a celebrity, a public figure whose pronouncements are reported by media around the country. And yet, at a time when our world faces a global health crisis like the current Ebola outbreak, instead of helping disseminate vital facts to the public, right-wing idiots like these spread lies and disinformation.

The U.S. must immediately stop all flights from EBOLA infected countries or the plague will start and spread inside our "borders." Act fast!

To President Obama's credit, he has sent U.S. military personnel to lead the international effort to contain the Ebola outbreak in West Africa. A similar military-led disaster response effort was mobilized in the aftermath of the 2010 Haiti Earthquake. But according to the right-wing echo chamber, this is all part of Obama's plan to infect our troops with Ebola. The reality, as National Institutes of Health Director Francis Collins recently stated, is that an Ebola vaccine would likely have already been developed if not for the past decade's worth of largely GOP-imposed budget cuts.

We might still be able to shut this outbreak down more quickly if conservative pundits and GOP officials would devote even a fraction of the time they've spent spreading Ebola panic to letting people know they can do something immediately to help. Modeled after this year's enormously successful ALS Ice Bucket Challenge, one of the players on Sierra Leone's national soccer team, Michael Lahoud, has created the Kick Ebola In The Butt Challenge. It's an innovative way to encourage donations to groups like Doctors Without Borders who are sending badly needed medical professionals to West Africa, in order to deal with the crisis at its source. This is the kind of response that could harness social media to direct charitable resources where they can help the most.

If the administration caves into the nonsensical GOP demands for a travel ban, the blood of future U.S. Ebola casualties will be on the hands of all the Republicans and their right-wing media enablers who have whipped up Ebola hysteria in a blatant attempt to influence the midterm elections. Shame on them.