The candidate, Dr. Annette Bosworth, is running in the Republican primary to succeed Sen. Tim Johnson (D-S.D.), who is retiring. Bosworth shared a viral image on her personal Facebook page criticizing the food stamp program for inviting dependency.

“The food stamp program is administered by the U.S. Department of Agriculture," the graphic reads. "They proudly report that they distribute free meals and food stamps to over 46 million people on an annual basis."

“Meanwhile, the National Park Service, run by the U.S. Department of the Interior, asks us ‘please do not feed the animals.’ Their stated reason for this policy being that … the animals will grow dependent on the handouts, and then they will never learn to take care of themselves,” the post continues. “This concludes today’s lesson. Any questions?” 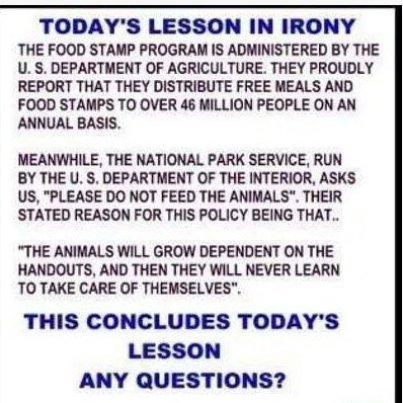 Former South Dakota Gov. Mike Rounds and state Rep. Stace Nelson are considered the frontrunners in the Republican primary, with Bosworth trailing behind.

The Republican-controlled House of Representatives passed a farm bill in January that cut about $800 million a year from the $80 billion-a-year food stamp program.