UPDATE, 1/9/2012: Good news, America! The House Republican Conference has decided to pursue a 50-state strategy, and now the weird blank space on their map has been filled in and the states properly labelled: 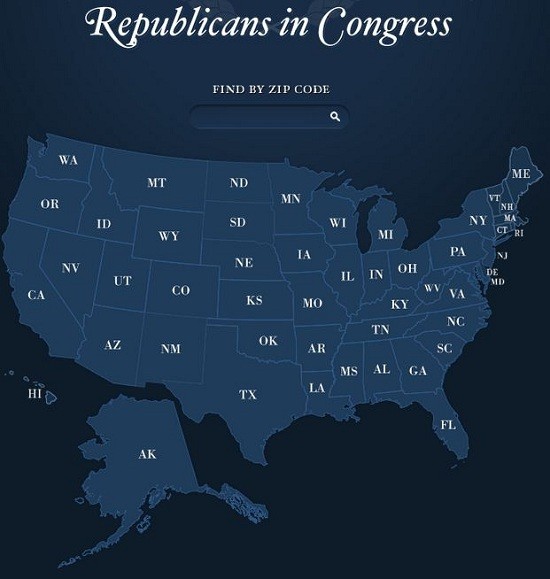 Still no love for the District of Columbia, though. [FROWNY EMOTICON GOES HERE]

The contemporary Republican Party is just trying to change the world, but they're not looking for a New England. Not if their recent map, guiding constituents to the various state delegations of their House caucus, is any guide.

Granted, there really isn't any point to the Republican Party providing links to state delegations in the U.S. House Of Representatives for states that currently provide no Republican House members. But over at the GOP's website, they tilt from utility to animosity -- going out of their way to stick it to the New England states by not even bothering to fill in their state borders or identify them in any way. 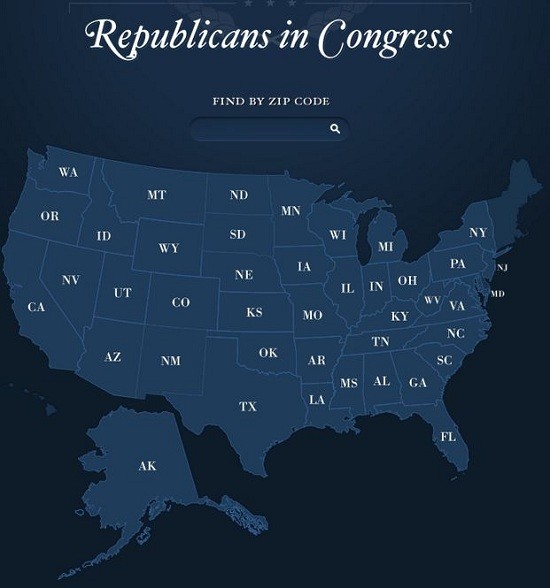 It's probably a sore point for the GOP, who are down to just two senators -- New Hampshire's Kelly Ayotte and Maine's Susan Collins -- as their total Congressional membership from the New England region. In 2012, the chances they had to defeat some vulnerable Democratic incumbents in the region -- Republican Richard Tisei's challenge to incumbent Massachusetts Democratic Rep. John F. Tierney was an example -- ended up not panning out. Worse still was Republican Sen. Scott Brown's loss to Elizabeth Warren in a contest that carried the connotations of a symbolic, election-year grudge match. (Additionally, in Connecticut, GOP Senate nominee Linda McMahon spent another huge chunk of her personal fortune to lose her second consecutive Senate race.)

Former Rep. Chris Shays (R-Conn.) summed up the state of play for the GOP in New England to Roll Call's Abby Livingston thusly, after the election:

“Pretty desperate,” the Connecticut Republican said in describing the state of the party in his native region. “The brand is not good in New England.”

Oh, well, the GOP brand will surely be aided by this map, on which all of New England is just depicted as some undiscovered (and even darkened!) country in which none dare tread. If they'd wanted to have a little fun, they could have just enscribed the area with "HC SVNT DRACONES" and put a picture of Barney Frank just offshore or something.

Besides Connecticut, Maine, Massachusetts, New Hampshire, Rhode Island and Vermont, the only other state that's not identified is Hawaii, which along with sending no Republicans to the House of Representatives, is the home state of President Barack Obama. It's probably not marked by name on the map because the GOP can't decide whether to call it "Kenya" to commemorate Birther nuts or "Liberal Asia" in honor of Bill O'Reilly.

Just a friendly tip, guys: you could maybe provide a link to your state party chair or something, just to create the semblance of an idea that you still want to compete in those states. Or not! I mean if there's a common thread to every post-election after-action analysis, it's that the GOP totally knows what it's doing, shut up.

UPDATE, 6:11pm: Eagle-eyed observers have noticed that I have left out the GOP leaving out Delaware, the First State and land of the Fighting Blue Hens and home of petitioned-for reality-star Vice President Joe Biden. I'm very sorry to the people of Delaware for the accidental exclusion.

I also left out my beloved birthplace, the District of Columbia, but you guys should be used to being largely and unjustly left out of the democratic process by now.