WASHINGTON -- Despite Gov. Rick Perry's splashy entrance into the GOP presidential race, Rep. Michele Bachmann has gained the most ground recently in the eyes of influential Republicans polled by The Huffington Post and Patch in the big three early-voting states of Iowa, New Hampshire and South Carolina.

Thirty-three percent of those responding to the new HuffPost-Patch Outsiders Poll said the Minnesota congressman, spurred by her surprise victory in the Ames Straw Poll last Saturday, had done the most to benefit her campaign last week. The Texas governor, who announced his candidacy last Saturday in South Carolina and who has been touring Iowa since then, finished second with 30 percent.

Although former Massachusetts Gov. Mitt Romney is widely perceived as a frontrunner, only 8 percent of the respondents said his performance in the last week boosted his standing. Ron Paul, who finished a close second to Bachmann in the Ames Straw Poll, also failed to impress the influential Republicans, as only 8 percent said he had helped his campaign.

The results are the first from a new survey designed to tap the uniquely extensive and deep reporting resources of the AOL Huffington Post Media Group in the three early GOP voting states. Future surveys will expand to include other key states in the nomination race and general election swing states nationwide as our network grows.

We aim to listen in to the ongoing conversation among party leaders, elected officials and activists known as the "invisible primary," since journalist Arthur T. Hadley used that term to describe it 35 years ago in a book of the same name. Hadley noted that since the 1930s, party nominating conventions tended to make their choice on a single ballot rather than truly deliberating through multiple ballots, and that leaders at the time of the first primary tended to win.

More recently, in the book "The Party Decides," four political scientists reached a similar conclusion. They argued that the “long running national conversation" that occurs among party leaders and activists helps the party figure out which potential nominee “can best unify the party and win the fall election.”

In a recent interview with the Columbia Journalism Review, one of the authors, Georgetown University assistant professor of political scientist Hans Noel, urged journalists to go beyond the usual coverage of presidential candidates and instead focus on this ongoing conversation among the party faithful. For example, he said, reporters could "go and talk to the various party leaders in Iowa, various activists, people who have been influential in earlier campaigns. You would cover Iowa, rather than covering Michele Bachmann in Iowa." Such a process, he said, is "daunting" and harder than following individual candidates. "But that is the place where the questions need to be asked."

So here at The Huffington Post and Patch, we are going to do just that. This first report involves what will be an ongoing effort by our Patch local editors to identify and regularly query a wide swathe of Republican party leaders, local elected officials and campaign activists about the ongoing presidential contest. We are building the list from the ground up, with local editors identifying these influential Republicans with old-fashioned reporting and then asking them to answer questions via email. We are starting in Iowa, New Hampshire and South Carolina, and plan to both grow the number of participants in those states and expand to other key primary states.

We are calling our participants “Power Outsiders” because these are the people outside-the-beltway who have local influence -- which means real power -- as the election heats up. You probably won't recognize their names, but their opinions will likely have great influence on the outcome of caucuses, primaries and elections at the precinct, county and state levels.

While we will ask standardized poll questions, these results cannot be considered a scientific sampling of a larger population. Yet they will amount to the most extensive and systematic effort of its kind to monitor the opinions of Republican activists and party leaders in the early primary and caucus states. As our project expands, we'll poll influential members of both parties on hot political topics and on issues being ignored in Washington -- such as the unfolding unemployment crisis.

For this first round of questions, we reached out to roughly 240 individuals we identified in Iowa, New Hampshire and South Carolina and asked three questions. We received responses from 133 people, including 58 from New Hampshire, 38 from Iowa and 37 from South Carolina (we asked respondents to allow us to publish their names as participants, and those appear below, but we will report results in aggregated form only).

We asked the Republican Power Outsiders to think about "the events of the last week, including the debate and the Ames straw vote in Iowa," and to name the candidate or potential candidate who "did the most to help their campaign over the last week." Most named either Bachmann (33 percent) or Perry (30 percent). 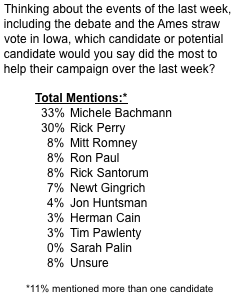 While we included Sarah Palin on the list of announced or potential candidates, not a single respondent mentioned Palin as having helped her cause in the past week.

We also asked about the presidential debate held in Iowa and televised by Fox News last Thursday. Most (72 percent) said they watched. A follow-up question asked for their "best guess as to how many rank-and-file Republicans in your area watched the debate." Less than a quarter (23 percent) said they thought "most" Republicans watched, with the rest said they thought "about half" (12 percent), "some" (43 percent) or "hardly any" (7 percent) watched. 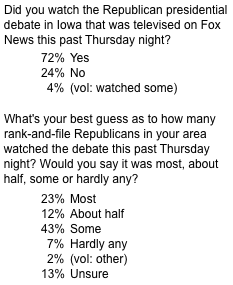 "The percentage who watched the debate is high," Hans Noel told The Huffington Post via email, "as it should be for a group of truly influentials." He noted that their estimate of the number of rank-and-file that watched also seems high. The debate drew 5.2 million viewers on Fox News, which amounts to roughly 4 percent of all television households. The estimate of how many watched may be true for Republicans in the early primary states, he wrote, "or it might be that influentials mistake how attentive everyone else is."

Noel also noted that the perceived boost for Bachmann and Perry seems both accurate and a reflection of the conventional wisdom, although it's "hard to tell" if the opinions of those polled "are setting that conventional wisdom (which I'd like to believe), or just reflecting it." Nonetheless, Noel said he is impressed "a debate that I bet few across the country saw, and a straw poll that few really believe is that predictive, and Perry's announcement, combined to turn the undefined race into a three-way race almost overnight. That's either a media-created story, or it's coming from these influentials (or some combination)."

All of the individuals listed below have agreed to participate in the Power Outsiders surveys, although many did not respond to the first questions.