In recent weeks, Republican presidential candidates have found time in their busy schedules to speak or debate before the Republican Jewish Coalition, "Value Voters," conservative Floridians, even Wyoming Republicans, who hold virtually no sway in the primary race. They've also agreed to appear at the CNN/YouTube debate they at one point shunned.

But it appears that some GOP frontrunners are once again letting an opportunity to appear before African-American voters lapse, just as they decided to sit out a black voter forum hosted last month by Tavis Smiley. 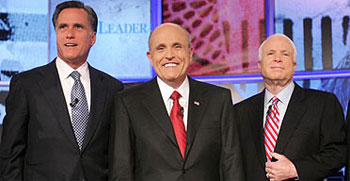 The Congressional Black Caucus Institute announced in September that it had scheduled a debate for November 4 on Fox News for Republican presidential candidates. But a spokeswoman for the group confirmed to the Huffington Post that it has now been postponed, with no new date set.

"It's the same issue they had with some of the other debates," she added. "We're getting a new working date, that's what's being considered."

The CBC Political Education and Leadership Institute is a non-profit organization linked to the Congressional Black Caucus, which includes 43 African-American members of the House and Senate.

The leading GOP campaigns were coy about whether they planned to attend the rescheduled CBC/Fox News debate when contacted by the Huffington Post. Of the frontrunners, only Mitt Romney's campaign said he was considering attending.

"The debate was canceled before we confirmed our participation one way or another," said spokesman Stephen Smith. "We were considering this debate before it was canceled. As soon as we have rescheduled dates, we will consider them, it depends on when it's scheduled."

The campaign of Rep. Ron Paul said he would "try very hard" to attend the rescheduled event.

In September, the Huffington Post reported that the Republican frontrunners would all sit out the African-American voter forum at Baltimore's Morgan State University. The debate's hosts set up four empty lecterns to highlight the absence of the leaders in the race for the 2008 nomination. The candidates who did appear, such as Paul and former Arkansas Governor Mike Huckabee, criticized their opponents for failing to reach out to African-American voters.

Earlier this month, the question of reaching out to minority voters again emerged when Senator McCain confirmed he would attend a December Spanish-language forum hosted by the Univision network.

The CBC Institute has confirmed a January 17 debate on CNN featuring the Democratic presidential candidates. Earlier in the year, all but three of the Democratic hopefuls had boycotted another debate planned by the CBC Institute and Fox News after party membership objected to the idea of appearing on the conservative-oriented network.