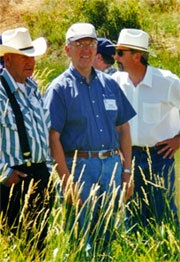 Well here's a fine to-do for all those wingnuts in Cloud-Cuckoo-Land!

It's time for the Republican Party to 'ex-Foley-ate' itself again as yet another gay-hating, homophobic, social conservative is caught with his pants down - and literally in the closet.

Senator Larry Craig has not only been a vociferous opponent of the gay movement (except apparently his own gay movements) but it turns out to that he is yet another steaming hypocrite who has pandered to the vast gay-loathing base of the Republican Party.

Only like so many Republicans who have come before him (insert your own joke here) - he is revealed by his recent actions and guilty plea to be a self-loathing gay.

But what is priceless is the excuse he offered to the policeman who arrested him.

Trying to explain why he was playing footsie with the man in the next cubicle in the airport toilet - he came up with this all-time classic. So fallacious that it sounds as if it came out directly of George Bush's mouth. "I have a wide stance"

So I thought I should look and see what Senator Larry Craig's "wide stance" is on the topic of that most cynically named of all Karl Rove's favorite wedge issues: "Family Values"

(As all thinking people know - the term 'Family Values' is a political branding as Orwellian and meaningless as 'Moral Majority' and 'compassionate conservative'. "We favor this looney position - therefore everyone who doesn't agree with us on this topic is against the first word in the topic name. i.e. im-moral, un-compassionate, anti-family etc. etc.")

Anyway - it's one of the big planks that the wingnuts think/hope might save them next year - so they cling on to it like a drowning GOP Senator clutching at stances.

Here from his official website is Larry's 'missionary' position.

(Well - it's from a pompous screed titled: "My Philosophy, Mission, and Goals" - so it's virtually 'missionary'!)

Defend and strengthen the traditional values of the American family.

Yup - playing footsie with a cute guy in the bathroom at the Minneapolis-St. Paul International Airport should certainly strengthen your American Family.

It will be fun to see how the blogging morons of the Immoral Minority try to spin this one!