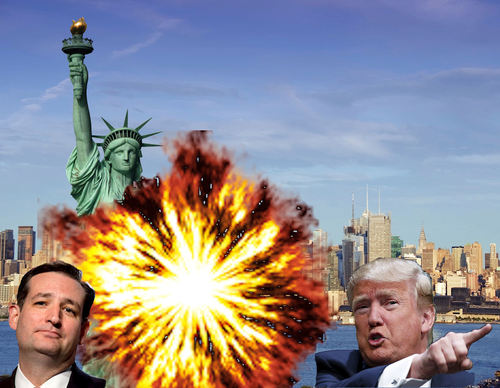 The Great Fear that has gripped a majority of Americans in the wake of the November 13 attacks in Paris is that our nation, too, will suffer a terrorist attack. That fear has now been borne out. Republican terrorists, led by presidential hopefuls Donald Trump and Ted Cruz and including more than two dozen governors and a large majority of members of the U.S. House of Representatives, have carried out a bold anti-American terrorist act that is having a devastating impact upon the United States.

They have blown up the Statue of Liberty.

And let us be very clear about the consequences of their actions:

They. Are. Doing. Exactly. What. ISIS. Wants. Americans. To. Do.

Many commentators have said that the politicians are merely reflecting the fears of the American people. Up to a point, that may be accurate. But the proper role of political leaders is to calm public fears and present accurate information to counteract false impressions. Instead, Republicans have seized what they see as an opportunity to gain political advantage by stoking fears, spreading misinformation, and undermining the very basis of America.

The fear has now been proven justified, though misplaced. The only act of terrorism that has taken place on American soil since the Paris attack has been Republicans blowing up Lady Liberty... and reversing Jesus' admonition, "Do not be afraid."

While Mr. Trump and others say "We have to be strong," they call for cowardice and giving ISIS exactly what its crazed adherents want: Americans abandoning our basic principles fundamentally changing our way of life.

As I wrote here recently, when Trump calls for creating a database of Muslims in the United States and Cruz proposes only to allow Christian, not Muslim, refugees into the country, they completely play into the narrative ISIS seeks to sell to Muslims around the world and so they act as very effective recruiters of new terrorists.

Because they will lead to more terrorists, such comments by prominent Republicans pose a considerably greater danger to the safety of Americans than do highly vetted Syrian refugees.

Republicans are using a tried and false tactic. Fear sells. But the purchase price is very steep, and what people wind up having bought is shoddy goods--or, rather, bads--the politicians themselves. Panic is good for no one but the fear-mongers who spread it.

Mr. Trump, Sen. Cruz, and others have altered the reassuring words spoken by Franklin D. Roosevelt in his first Inaugural Address to:

So, first of all, let us assert our firm belief that the only thing we have to sell is... fear itself -- nameless, unreasoning, unjustified terror which paralyzes needed efforts to convert retreat into advance, but can help to elect us, the politicians who are selling it!

These cowardly Republicans will willingly abandon what the United States stands for rather than allow a single Syrian refugee, even a 5-year-old child who has been vetted for two years, into the United States, because of a danger that she just might be a terrorist. But, while these oh-so-brave "real men" tremble at the thought of a little girl, they refuse to support stopping people on the terror watch list from obtaining guns.

Actually, that absolutely asinine position is also an example of their utter cowardice. In this case, it is their complete lack of the courage to take any position, no matter how common-sense it is, that the National Rifle Association opposes. They're brave enough to stand up against unarmed women and children fleeing terror, but, hey, the NRA has guns... and money... and votes! You can't expect us to stand up to them!

They are the very definition of Chicken Hawks: all for sending American troops into extreme danger, but totally unwilling to face the slightest danger--political, let alone physical--themselves.

The ISIS monsters must be laughing themselves sick--well, that image doesn't work, because they're already as sick as human beings are capable of being--laughing themselves to the point where their bellies ache at what they have gotten the Republicans (and some spineless Democrats) to do to undermine the very values that ISIS seeks to destroy.

"Risk Takers" Abandon American Principles if the Risk Is Above Zero

Republicans such as Trump say they believe in risk-taking, but they insist that before they will adhere to what America stands for there must be zero risk.

They'll eagerly shred the social safety net, leave people without health insurance, tell workers that $15 an hour is too much to be paid, jeopardize the future of the planet by denying climate change, and so on -- but they say the risk that, just maybe, someday some refugee might come into the country and attempt to carry out violence is a risk we cannot tolerate.

So they are ready to build a huge bonfire and burn the American flag, the Declaration of Independence, the Constitution, and the Sermon on the Mount to make us absolutely safe.

Yet is that sufficient to assure us that we will be absolutely safe?

Anyone who is so scared that he will abandon American values because of the possibility of a terrorist entering the country should understand that it is far more likely that a terrorist will enter the country as a tourist. Should we then, as the Republicans have everyone wetting their pants in fear, end all foreign tourism to the United States?

And what about a cargo ship bringing in a dirty bomb -- an unfortunately much more likely scenario than a vetted Syrian refugee being a terrorist? To be 100 percent safe, as the Republicans are demanding, we will have to stop all trade with other nations.

Let's go ahead and build the Donald Trump Wall around the entire country and not let anyone or anything in.

But would closing ourselves off from physical contact with the rest of the world make us 100% safe? No--what about home-grown terrorists who are radicalized by social media? In addition to Trump's registry, we'll need to block all internet and other communication with the outside world.

That's the policy the Republicans are selling: We'll become North Korea, only even more so.

The bottom line is simply this:

Abandoning the values for which we purport to stand is no way to protect ourselves against barbarians who want to destroy those values.