In the final days before the Nov. 4 elections, last minute voter intimidation tactics intended to benefit Republican candidates are being reported nationwide.

In Kentucky, Senate Republican Minority Leader Mitch McConnell's campaign has sent out official-looking mailers that scream, "ELECTION VIOLATION NOTICE." The mailers claim to contain "facts related to a possible fraud being perpetrated on citizens across Kentucky," and warn voters that "You are at risk of acting on fraudulent information." 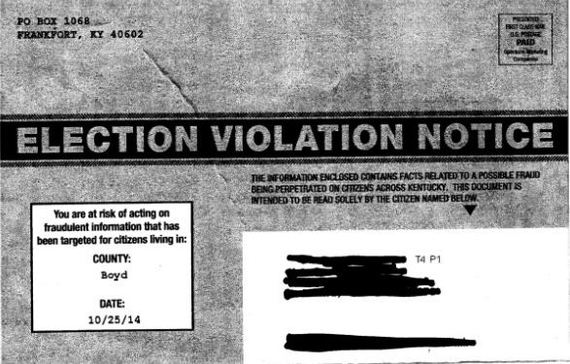 Inside, the text of the mailers reads as if they were sent from election boards, claiming "information that has been red-flagged as 100% false is being purposely spread by the campaign of the federal candidate named below: Alison Lundergan Grimes." 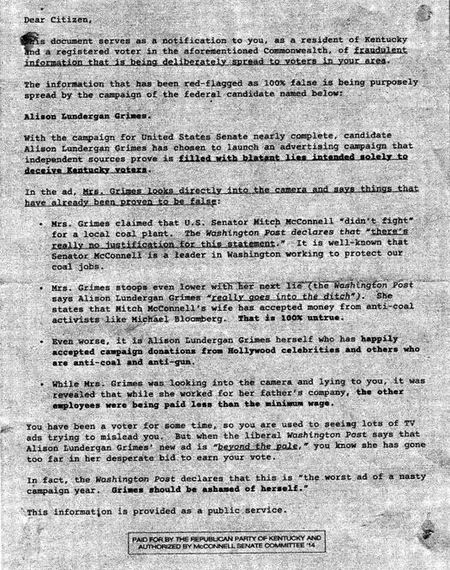 McConnell's Democratic challenger, Kentucky Secretary of State Alison Lundergan Grimes, immediately filed suit seeking to stop the mailers from being distributed, and called for a state and federal investigation. The mailers appear to have violated at least two Kentucky statutes that are punishable by felony charges.

Also in Kentucky, the Attorney General's office has received a complaint about voter intimidation directed towards college students. A full page ad was published in the Berea Citizen warning students that their right to vote is "subject to be challenged" if they go to the polls this year, and students who are found to be registered improperly "could face significant penalties."

The vice president of Berea College Student Government, Jacob Burdette, called it "an attempt at voter suppression," and told students not to be discouraged from voting. "Our message is, if you consider Berea home and you've taken steps to make it such, with regards to voting, go vote." The group behind the ad was labeled "Concerned Citizens of Berea," and the newspaper's publisher would only identify them as a "group of private citizens."

Groups like Claim Your Vote have been fighting back against this sort of phony information being used to mislead students, which comes on the heels of GOP-led efforts to block the student vote in New Hampshire and North Carolina.

One particular type of voter intimidation cropping up around the country this year is voter shaming.

In Iowa, Republican National Committee-sponsored ads are appearing in Facebook users' news feeds, implying that their neighbors will know if they don't vote Republican. Which is, of course, totally false. 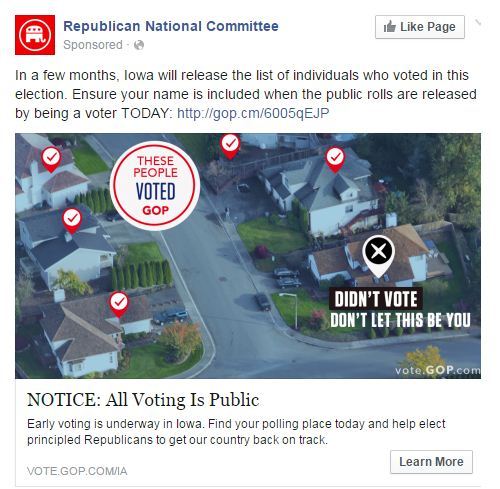 In Florida, where incumbent Republican Governor Rick Scott is locked in a tight battle with former Governor Charlie Crist, an Orlando-based PAC called Citizens for a Better Florida Inc. has sent out mailers that threaten to reveal who voted in the group's next mailing, to be delivered after the election. The front of the mailers state, "Your Neighbors Will Know. It's Public Record."

The PAC's money comes from the Realtors Political Advocacy Committee, which shares the same address with Citizens for a Better Florida. 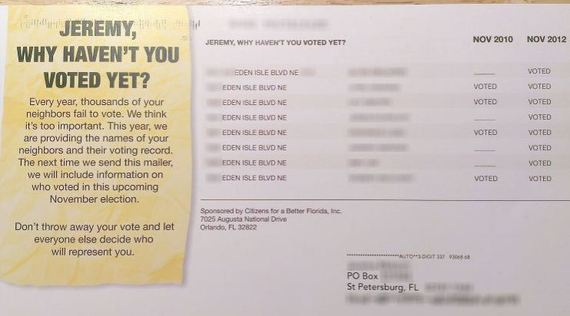 According to the Tampa Bay Times:

Records show the group formed in 2008 and has raised more than $2 million, much of which it has used to assist the campaigns of Gov. Rick Scott and other statewide Republican candidates.

Over the past month alone, the Realtors Political Advocacy Committee raised almost $1 million, including $795,000 from the Chicago-based National Association of Realtors.

Voter intimidation tactics like these recall the ugly ways that African-American votes in the South were suppressed during much of the twentieth century. As recently as 1990, postcards were mailed to 125,000 black voters in North Carolina threatening them with jail if they voted. The postcards went out in the closing days of the hotly contested U.S. Senate race between incumbent GOP Senator Jesse Helms and his Democratic challenger Harvey Gantt, the first black mayor of Charlotte, a race Helms won by 107,000 votes. 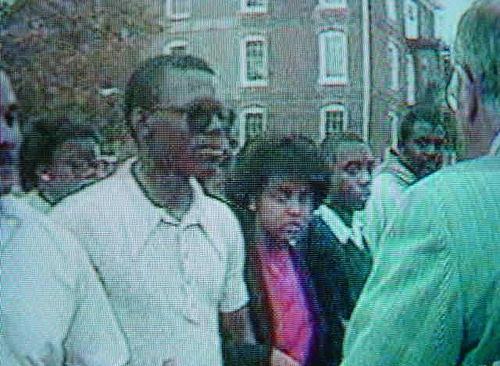 Why do the Republicans feel a need to engage in such shady voter intimidation schemes year after year? Why are they so afraid of letting people go to the polls and choosing whichever candidates they prefer, free from interference with their right to vote?

Maybe they realize that if voters were allowed to make up their own minds, too many of them might refuse to be intimidated by GOP scare tactics any longer.