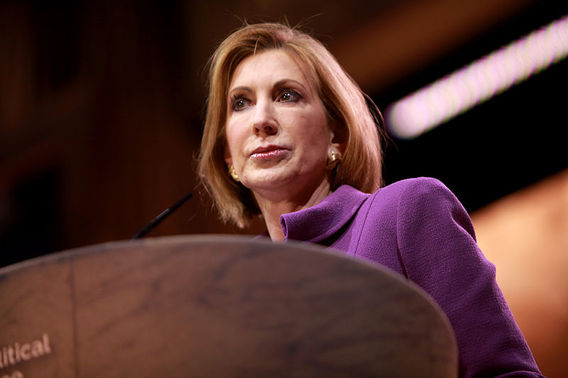 This is the second of two posts about the latest Republican presidential debate. The first is posted here.

Since President George H.W. Bush signed off on the world's first climate treaty more than 20 years ago, the denial industry has been searching for a talking point that would accomplish two goals. First, it would discredit the science. Second, it would stand up to scrutiny.

There has been a long history of failed talking points since then. Among them: Scientists are making things up so they can get grants; environmentalists want to kill American jobs and take away everyone's Hummers; President Obama is a socialist; and the United Nations is trying to create world government. None of them worked, or so we must conclude since sizable majorities of Americans accept that climate change is real and must be addressed.

Now the denial industry has developed a new talking point that is being recited by some of the Republican Party's presidential candidates. Sadly for them, this one doesn't stand up to scrutiny either. In fact, it comes dangerously close to putting the candidates on common ground with climate activists. That probably is not what the denial industry intended.

The new talking point is this: America cannot solve the climate problem alone; therefore we should not do anything. Sen. Marco Rubio tried to make this argument during last week's CNN debate when he informed us that "America is not a planet". Carly Fiorina is making that argument, too. Here is what she said in an interview last month with CNBC's John Harwood:

HARWOOD: "Do you believe that humans contribute to climate change and that government ought to do something about it?"

FIORINA: "I believe if you're going to go to science, you need to read the fine print. And here's what the scientists say: A single nation acting alone can make no difference at all."

There are several reasons why climate activists must be delighted at this argument. First, at least one of the GOP's candidates apparently has read the large body of reports from the world's climate scientists, right down to the fine print. Second, the "we can't do it alone" argument acknowledges there is something to be done. Third, the fact that America cannot solve the climate problem alone is precisely why the United States is working with more than 190 other nations that will meet in Paris later this year in hopes of agreeing on an international climate treaty. It is why the Obama Administration has negotiated climate and clean energy agreements with some of the world's other large carbon emitters including China, India and Brazil. And it is why the Republican leaders in Congress should stop trying to sabotage the global climate deal.

Writing about Fiorina's statement, David French of the conservative National Review concluded that she has found "how to address the Left on climate change". The fact that America can't solve global warming alone, he wrote, "may represent the best, and most easily defensible, path forward to consensus."

He would be correct if the defensible path to consensus led to Paris. Instead, he probably meant we should all agree to throw in the towel.

In her conversation with Harwood, Fiorina offered several other arguments that do not withstand scrutiny. Here are some of them followed by reality checks.

FIORINA: "The only answer to this (climate) problem, according to the scientists, is a three-decade global effort, coordinated and costing trillions of dollars. Are you kidding? It'll never happen."

History offers many examples of sustained and successful international collaborations. Imagine what the world would be like today if Ronald Reagan had brushed off nuclear arms control or the need to end the Cold War with "Are you kidding? It'll never happen".

FIORINA: "We ought to say, "We're going to become the global energy powerhouse of the 21st century"."

I don't know anyone who would disagree. The argument is over what type of energy would make us a powerhouse. Fossil fuels are the resources of the 20th century, not the 21st. The pressure is mounting to slow climate change by keeping most of the known reserves of fossil fuels in the ground.

The most dynamic global energy markets today are in clean and renewable resources. A formidable body of research substantiates this. For example, a report earlier this year from Pew Charitable Trusts and Bloomberg New Energy Finance concludes, "The world's energy dynamic is changing in response to powerful economic, security and environmental forces"; the clean energy sector has become a "$300 billion fixture of the world economy"; and "renewable energy will supply the majority of worldwide power capacity added through 2030."

If we hope to become the world's energy powerhouse, we need to be on the right side of this century's energy markets.

FIORINA: When the Chinese said to Obama, "Oh, we're going to come up with a deal with you, we're going to stop increasing our global greenhouse emissions by 2025," you know what they were doing? They were simply lifting a goal out of a five-year plan and saying, "We'll play along." They're not playing along.

Aren't they? Fiorina might ask herself why a reduction in emissions is part of China's five-year plan in the first place. It has nothing to do with public relations, altruism, concern for its children's future, its desire to be friends with the United States, or an obligation to the world community. It is driven by the threat that the Chinese people will lose confidence in their central government, or worse, because of unabated pollution. As the New York Times reported back in 2007:

Environmental degradation is now so severe, with such stark domestic and international repercussions, that pollution poses not only a major long-term burden on the Chinese public but also an acute political challenge to the ruling Communist Party.

That remains the case today. The combustion of fossil fuels produces not only greenhouse gas emissions but also the pollutants responsible for smog, acid rain, regional haze and respiratory problems. In China as in other places, many of the steps we must take to reduce greenhouse gas emissions also reduce these other emissions. Since that is in the interest of China's leaders, Reagan's approach to their commitment would be, "trust but verify".

There is common ground here, too. Everybody considers innovation essential to confronting climate change, especially innovation at sufficient scale, speed and market penetration to matter. Fiorina is wrong, however, to suggest that innovation and regulation are mutually exclusive. The best way to address global warming is for innovation and government regulation to work in concert. Smart regulation inspires innovation. That was the case 30 years ago when it became clear to DuPont that governments would regulate CFCs, the cause of the so-called ozone hole. DuPont, the biggest producers of CFCs, jumped on the opportunity to create alternatives and to become a leader in the new market created by regulation.

By setting a regulatory signal and allowing for market-based compliance mechanisms, EPA rules have initiated the development of active and efficient markets in reducing the lead content in gasoline, combatting acid rain, and controlling regional transport of ozone due to emissions of sulfur dioxide (SO2) and nitrogen oxides (NOx). These prior regulatory programs offer strong evidence that industry responds rapidly and effectively to regulatory signals set by EPA when market-based compliance mechanisms are allowed, enabling the development and delivery of a wide array of compliance solutions at low cost.

The government policies that inhibit market-leading innovation today are federal subsidies of carbon fuels and the failure of Congress to assign a price to carbon.

When the leading Republican candidates for president gathered in the Reagan Library for the CNN debate last week, they should have taken time to look up what President Reagan said about environmental issues like global warming. "If we've learned any lessons during the past few decades, perhaps the most important is that preservation of our environment is not a partisan challenge; it's common sense," he said in 1984. "Our physical health, our social happiness, and our economic well-being will be sustained only by all of us working in partnership as thoughtful, effective stewards of our natural resources."

In 1964, nearly two decades before he became president, Reagan said, "You and I are told we must choose between a left or right, but I suggest there is no such thing as a left or right. There is only an up or down...You and I have a rendezvous with destiny. We will preserve for our children this, the last best hope of man on earth, or we will sentence them to take the first step into a thousand years of darkness. If we fail, at least let our children and our children's children say of us we justified our brief moment here. We did all that could be done."

If climate activists and climate skeptics want to find common ground, those are the perspectives that point the way.