Leave it to the tone deaf GOP to find a way of attaching themselves to this election cycle's "change" mandate that simultaneously reinforces the fact that their failed policies have messed up the world to such an inhuman extent that many Americans now live their daily lives in a state of free-floating panic and paralyzing anxiety.

In today's New York Times' Caucus blog, Carl Hulse reports that House Republicans have got themselves a brand-new slogan:

It looks like Republicans will counter the Democratic push for change from the years of the Bush administration with their own pledge to deliver, drum roll please, "the change you deserve." The first element of the party agenda developed over the past few months by the leadership and select party members will focus on family issues.

"Through our "Change You Deserve" message and through our "American Families Agenda," House Republicans will continue our efforts to speak directly to an American public looking for leaders who will offer real solutions for the challenges they confront every day," said the memo prepared for lawmakers.

What the GOP doesn't seem to realize, because they are idiots, is that "the change you deserve" is the registered advertising slogan of Effexor XR, a drug that many of you might have started taking as a result of all the...you know -- terrorism. (Hat tip to Bluestem for catching this gem.)

Effexor, also known as Venlafaxine, is approved for the treatment "of depression, generalized anxiety disorder, social anxiety disorder, and panic disorder in adults." Its common side effects are very much in keeping with the world the House Republicans have striven to build: nausea, apathy, constipation, fatigue, vertigo, sexual dysfunction, sweating, memory loss, and - and I swear I am not making this up - "electric shock-like sensations also called 'brain zaps.'"

Its less common side effects are equally awesome in their appropriateness.

And when the Food And Drug Administration reviewed the ad copy that included the tagline, "The change you deserve," it took issue with Wyeth Pharmaceuticals, which manufactures Effexor, saying that the company made "unsubstantiated superiority claims." Sounds like the GOP have picked an ironically accurate tagline for their efforts! 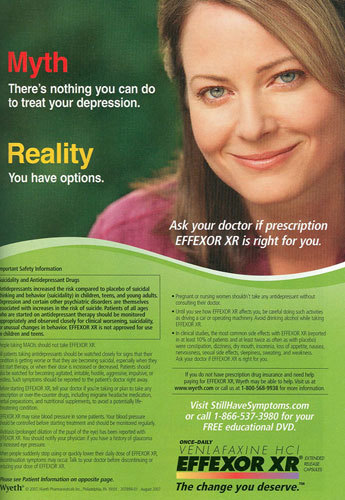