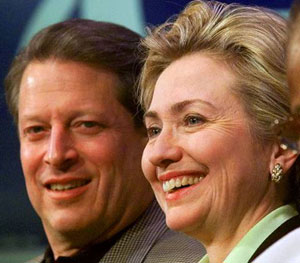 Now that the Nobel Prize Committee has awarded Al Gore (and the Inter-governmental Panel on Climate Change) for his work on global warming, speculation will inevitably fly that it gives him more momentum for a late entry into the 2008 Democratic presidential field.

But so far, Democratic hopefuls don't seem worried about that possibility.

Senator Barack Obama lauded Gore with praise in a statement released to the Huffington Post by his office:

By having the courage to challenge the skeptics in Washington and lead on the climate crisis facing our planet, Al Gore has advanced the cause of peace and richly deserves this reward. His voice and his vision have awakened the conscience of America to the urgency of this threat, and now we must take bold action so that our children inherit a planet that is cleaner, safer, and more peaceful for generations to come.

On Senator Hillary Clinton's homepage, the campaign posted a photo of Gore with a short statement praising him for his 'dedication and tireless work' and calling the award 'well deserved.'

But of all the Democratic seekers, it was Bill Richardson who took the most interesting approach in praising Gore. After boasting of all the work that he has done to make his state compliant with the Kyoto Protocol, the New Mexico Governor almost seemed to suggest that he was the only candidate who could follow through on what Gore has started: