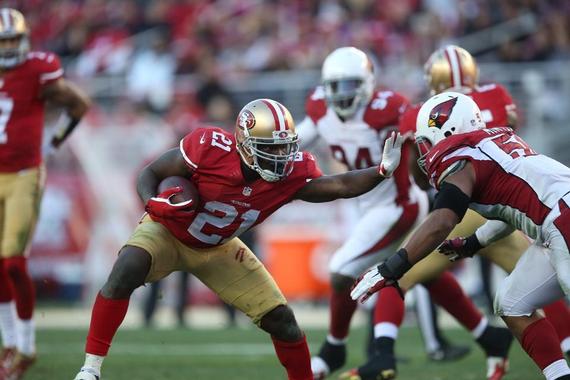 Frank Gore is the all-time franchise player for the Niners. Yesterday he became the eleventh player in NFL history with eight 1,000 yard seasons and the 20th player to reach 11,000 yards. No better way than to end the season in front of friends and family just in case this is his final year with San Francisco.

The veteran running back celebrated the 20-17 victory over the Arizona Cardinals and was brought to tears afterward thinking, "what if this is my last year?" Gore told a packed press conference that he became emotional wondering if he played his last game.

"I wanted to finish it right for my fans who've been with me since I was 21, when I first got here," said Gore. "They've been great fans. They've been down with us. Even though the year was a disappointing year, they were still here. I just wanted to finish right. If I'm not here, I wanted to show my fans the way a 49er is supposed to play."

Gore finished with 144 yards on 25 carries on Sunday. He joins an elite group (Jim Brown, Walter Payton and Barry Sanders) for playing with one team his entire career and rushing for 11,000 yards. Gore was drafted by San Francisco back in 2005. He knows his time is running out and teams will think he's too old. But if they'll let him, he wants to come back.

"It's a blessing," Gore said referring to his 1,000 yards. "A guy who came in the league when I first got drafted said it was a reach. I had two knee injuries but I'm still here. I have to take my hat off to the O-Liners, Coach [Jim] Harbaugh, [Defensive Assistant] Coach [Ejiro] Evero. I want to be back but I know this is a business."

"He's the best running back I've ever blocked for," said Guard Mike Lupati. "He's just awesome. It's an honor to play with him and block for him."

In a bizarre ending to this once playoff-driven team, the 49ers will pack their lockers today and say good-bye to their head coach who lead them to the NFC Championship and Super Bowl in his four-year tenure. Harbaugh and the organization announced 10 minutes after his press conference that they'll be parting ways. 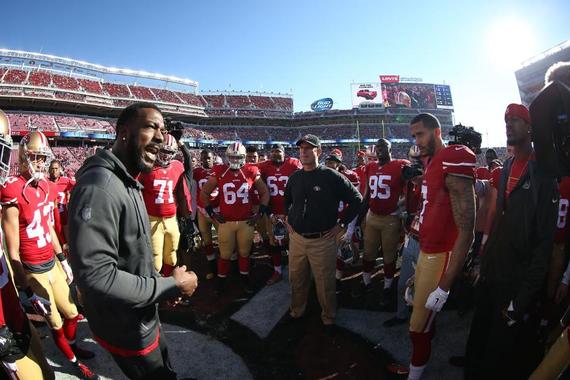 A bitter sweet victory for Harbaugh as he leaves before San Francisco will host the 2016 Super Bowl. Now the former 49ers coach will take his talents back to his alma mater, the University of Michigan. Harbaugh is rumored to be the highest paid coach in college sports. But all he wanted to do is win his final game.

The Cardinals scored on their opening drive when Ryan Lindley found a wide open Michael Floyd in the end zone for a 20-yard touchdown. Floyd finished with eight catches for 153 yards. Lindley found Floyd for two touchdown passes of 20 and 41 yards in the first half. San Francisco tied the game 7-7 with Anquan Boldin's 76-yard touchdown pass from Colin Kaepernick in the first quarter.

Phil Dawson kicked a 53-yard field goal that barley cleared the goal giving the 49ers a 10-7 lead to start the second quarter. In the final seconds of the quarter, Arizona scored regaining the lead 17-13. But in the third quarter Chris Culliver picked off Lindley to set up Boldin's nine-yard touchdown. But a penalty on the offense negated that. Kaepernick connected with Bruce Miller for the three-yard touchdown and gave the 49ers back the lead for good.

"It was huge, we were down, we weren't out," said guard/tackle Alex Boone. "We came out and fought hard and everybody played well. Proud of the offensive line, proud of everybody. That was a physical game and that's the way to end the year."