You might not normally be interested in a local news story from the New Hampshire Union-Leader about a beach house that "was gutted this morning after two separate fires broke out just a few hours apart." But reporter Jason Schreiber made sure it would get national attention when he snapped the most bizarre photo that he possibly could and attached a brilliantly deadpan caption. 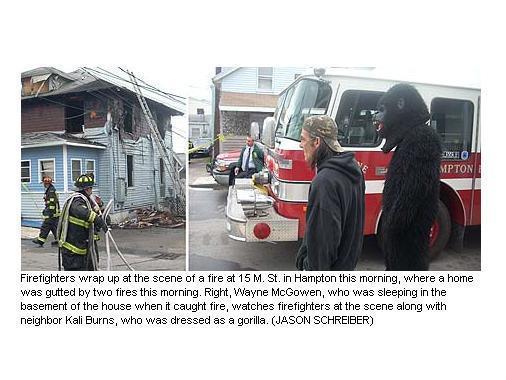 Says commenter Barney, from Hampstead: "What is going on with the Union Leader lately?!? Yesterday, we have the pregnant deer getting decapitated by a Corolla... today, we have a house fire victim dressed as a gorilla! What?!? There were no better photos than that of a guy dressed as a gorilla watching his house burn?" NO, THERE WEREN'T ANY BETTER PHOTOS. ARE YOU KIDDING ME?

Anyway, there's your top contender in the Gorilla Furry Photobomb Of 2010. The End.

Comedy How Did This Happen Gorillas Eat The Press Media