On Monday I penned a piece entitled "RIP: Captive Gorilla Shot at Zoo." If you are not familiar the facts surrounding this incident, my prior post can be read by clicking here.

My position is simple. The death of this magnificent animal at the Cincinnati Zoo "Gorilla World" exhibit was caused by the negligence of humans in creating a scenario that allowed a 3-year-old child to get into harm's way. In addition, I questioned the ethics of zoos imprisoning and displaying animals.

The result is one less endangered species gorilla in our midst. What is in our midst are those who misinterpret the words of those of us who mourn the loss of this animal.

For example, in spite of those who claim otherwise, neither I nor most others argued the moral equivalency between saving the child or the gorilla-- although there is some evidence that they were not mutually exclusive choices. Perhaps both could have survived. The Daily Mail quotes more than one animal behaviorist who concluded that the gorilla would not have harmed the child and that non-lethal options may have been warranted. In addition, ABC News and others report that witnesses state that the gorilla seemed to be protecting the child.

In fact, even famed gorilla expert Jane Goodall has stated "I tried to see exactly what was happening--it looked as though the gorilla was putting an arm round the child--like the female who rescued and returned the child from the Chicago exhibit."

Here is the full text of her correspondence to Cincinnati Zoo Director Thane Maynard yesterday:

I feel so sorry for you, having to try to defend something which you may well disapprove of. I tried to see exactly what was happening--it looked as though the gorilla was putting an arm round the child--like the female who rescued and returned the child from the Chicago exhibit.

Anyway, whatever, it is a devastating loss to the zoo, and to the gorillas. How did the others react? Are they allowed to see, and express grief, which seems to be so important.

Feeling for you,
Jane

The Chicago incident referred to by Ms. Goodall was eerily similar to the episode at the Cincinnati Zoo-- it involved a gorilla and another three year old boy who fell into the animals' exhibit, both of whom lived to tell about it. That gorilla rescued the child and was not shot attempting to do so.

And here is yet another non-fatal encounter between a compassionate captive gorilla and a child, again with both surviving the ordeal.

But should we second guess those at the Cincinnati Zoo who decided to shoot and kill the gorilla? Maybe. I do question the judgment of those same people who created and maintained the architecture that would allow a child to get into the exhibit, and the wisdom of those who chose to imprison animals such as this gorilla. Call me a skeptic, but I don't necessarily trust their judgment.

It has been reported that a zoo employee shot the gorilla with a rifle when the child was between the gorilla's legs. That seems a bit dicey to me. Could the child have been accidently shot? But who are we to second guess the wisdom of these zoo keepers?

In addition, many argue that the media and others have made too much of the death of this gorilla. For example, on May 31 actor Rainn Wilson posted the following tweet , "Everyone cares more about the Gorilla that was shot than the 31 American HUMANS killed by guns EVERY DAY! #Enough@BradyBuzz"

Gee, I didn't realize that these were mutually exclusive ideas. I, for one, can be concerned about BOTH animal and human suffering. Using Mr. Rainn's logic, why worry about the 31 American HUMANS killed by guns ever day when there are thousands who die throughout the world each day from genocides, famine, war, terrorism, and untreated curable diseases. Shouldn't we save all of our apparently limited compassion for them?

There is a broader ethical question here, and that is how we treat all living things, including each other. Gandhi has said, "The greatness of a nation can be judged by the way its animals are treated." That might be a good starting point for examining our morality. One can hope that someday people will stop using helpless animals for food, displays, entertainment, and décor. Human denial allows us to pamper one animal while eating another. 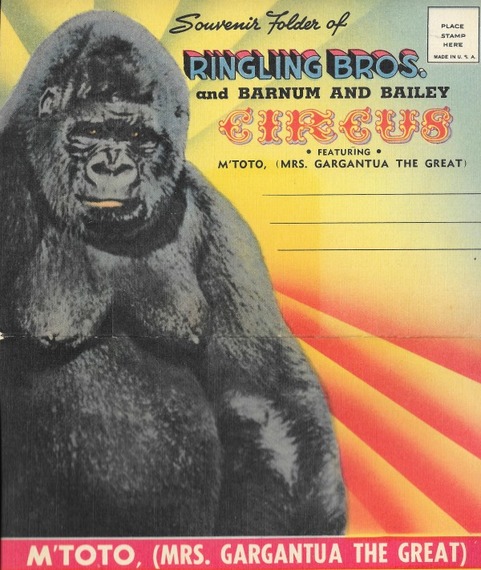 The cover of a circa 1950s Ringling Bros. and Barnum and Bailey postcard folder touting their exhibit of "M'Toto, (Mrs. Gagantua the Great)." We have come a long way since this was thought of as acceptable-- now we display gorillas in enclosures such as "Gorilla World" at the Cincinnati Zoo.

Footnote: CBS News reports that the family of the boy who fell into the "Gorilla World" exhibit has suggested that donations be made to the Cincinnati Zoo in the name of Harambe, the gorilla that was killed as a result of this incident. Perhaps instead of rewarding the Zoo, under the circumstances one might instead consider a donation to some other worthy animal advocacy group.