GALILEE, Israel (RNS) Perched on Tel Kinrot, a hill above the Sea of Galilee, Winston Mah turned his face toward the warm sun and took in the tranquil view before him.

To his right, the Christian pilgrim from San Diego saw banana groves at the edge of the calm fresh-water lake; to his left, on the opposite hill, rose the majestic Mount of Beatitudes at Tabga, where, according to Christian tradition, Jesus delivered his Sermon on the Mount.

"This is a unique experience," Mah said, gazing at a lone fisherman on the water's edge. "This is the view Jesus must have seen, the path he might have walked, the water he walked on. It's a privilege to walk in his footsteps."

It's one thing to read about biblical sites while seated in a church pew back home, Mah said. But "it's another thing entirely to be in the actual place, just as it's described in the Bible," he said, his voice full of wonder.

Mah and his church group were among the first hikers on the newly inaugurated Gospel Trail, 39 miles of integrated paths leading from Mount Precipice on the southern outskirts of Nazareth to the site of ancient Capernaum on the shores of the Sea of Galilee.

Developed by the Israeli Ministry of Tourism and the Jewish National Fund, the project has the enthusiastic support of local Christian leaders, whose flocks depend on the tourist trade.

"It is our hope that this trail will bring many more Christian pilgrims to the Galilee, where Jesus lived and had his ministry," said Bishop Boutros Muallem, the Melkite archbishop emeritus of Galilee, who attended the trail's festive opening aboard a boat on the Sea of Galilee.

Roughly 150,000 Christian Arabs live in Israel, the vast majority of them in the Galilee region, in the north of the country. As elsewhere in the Middle East, many Holy Land Christians have emigrated in search of economic stability and peace.

Now that the political situation is relatively quiet, and a record number of tourists are flooding into Israel and the Palestinian-ruled territories, local Christians are benefiting and emigration is slowing, according to government statistics.

Two out of three tourists who visit Israel are Christian, according to the tourism ministry. Leading a group of journalists down a section of the trail on horseback, Tourism Minister Stas Misezhnikov said the Gospel Trail "represents a major means for maximizing the tourist potential" of the Sea of Galilee region.

"It will encourage economic growth in the north through the creation of new jobs," he said, "and an increase in income from the visitors."

The Gospel Trail isn't the first Christian-oriented hiking/cycling trail in the region. The 40-mile Jesus Trail begins in the city of Nazareth, the home of Mary and Joseph, and ends at the Sea of Galilee. Though the trails overlap in many areas, the Jesus Trail winds its way through more Christian, Muslim and Jewish population centers and already has an infrastructure.

In the coming months, the government hopes tour operators will provide itineraries and transportation to and from various sites along the Gospel Trail, and that local business owners will provide everything from accommodations to bathrooms.

In the meantime, visitors need to make their own arrangements or request special arrangements from a tour operator.

Both trails capitalize on the beauty of the Galilee region. One of the only truly green places in Israel, the hills are dotted with towns and villages, cows, sheep and olive trees.

Proficient hikers can make the entire journey in about four days.

The Gospel Trail includes the Arbel Cliffs, which served as the backdrop of many ancient battles; the ancient ruins of Beit Saida (Bethsaida), a biblical-era fishing village and the birthplace of the disciples Peter, Andrew and Philip; Capernaum, the starting point of Jesus' ministry in the Galilee; and Kfar Kana (Cana), where Jesus healed the nobleman's son.

Also along the route: Migdal/Magdala, identified in the Gospels as the home of Mary Magdalene; and the Mount of Beatitudes, where a picturesque church, surrounded by greenery and special areas for prayer, overlooks the sites related to Jesus' ministry. The late Pope John Paul II held a large Mass on a nearby knoll in 2000.

Whenever possible, the trail leads through unspoiled vistas full of indigenous plants and small wildlife. Israel, and especially the Galilee region, is a top bird-watching destination.

At Tel Kinrot, which was part of the major trade route between ancient Egypt and Syria on the northwestern shore of the Sea of Galilee, an Italian pilgrim named Stefano gazed at the archaeological ruins.

"I'm very happy to be on this trail, to see the sites where Jesus lived and the archaeological sites," the 26-year-old said. "It helps me to thank God for what he does in my life." 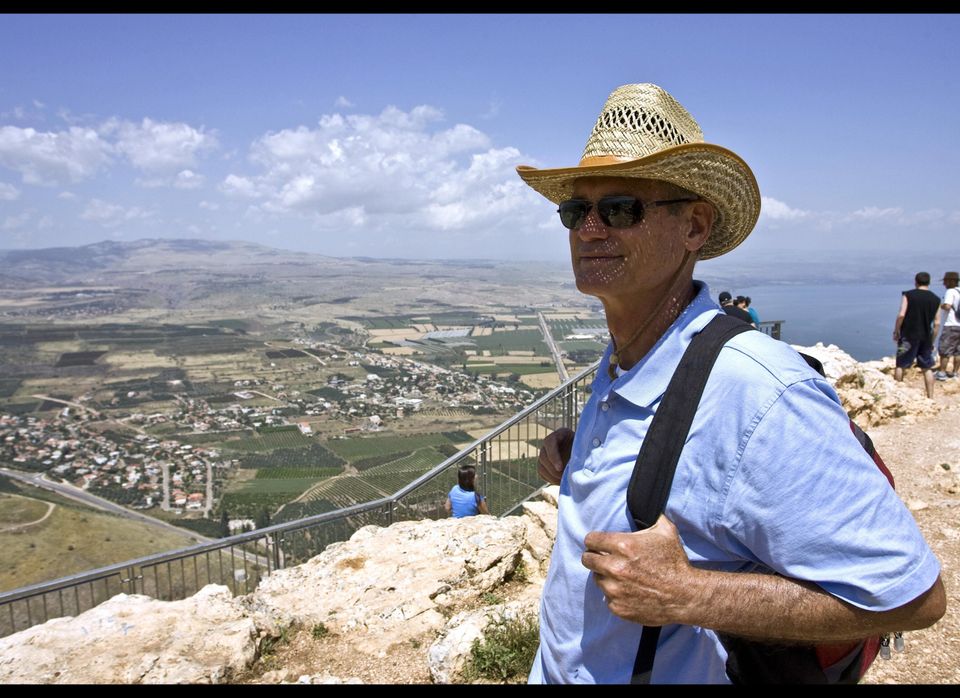 1 / 7
US hiker Daniel Ray stands on top of Mount Arbel in the Lower Galilee near the city of Tiberias on April 25, 2009. A 65-kilometre (41-mile) route is taking hikers from Jesus Christ's boyhood town of Nazareth to the Mount of Beatitudes where he is believed to have delivered his seminal Sermon on the Mount. The Jesus Trail, a three- to four-day journey, is seen as an opportunity for Christians to feel connected to their faith and the life of Jesus. AFP PHOTO/JONATHAN NACKSTRAND
Getty