Well here's one wedding detail Gossip Girl would most certainly not approve of: Blair Waldorf's bridesmaids in the upcoming "Gossip Girl" royal wedding episode will be wearing Vera Wang... for David's Bridal.

Although the ever-critical Gossip Girl as well as Blair (Leighton Meester) would likely be appalled at the notion of off-the-rack dresses, "Gossip Girl" costume designer Eric Daman told Refinery29 that he specifically wanted to make the fictional wedding as "accessible" as possible:

I think kind of the most surprising thing that we've done this season is for the 100th episode which is the wedding episode that the bridesmaids are actually wearing Vera Wang's line for David's Bridal which is called White. It was important to me to have that accessibility to kind of create this royal wedding and all this drama but I knew we were doing a lot of interviews and I really think it's important to have our viewers at home feel like it's actually something accessible.

It's a distinctly different approach than usual, considering the show's stars, namely Blake Lively as Serena and Leighton Meester as Blair, tend to wear all sorts of covetable designer labels like Jenny Packham and Stella McCartney.

Blair's wedding dress, revealed in photos last month, is a bespoke Vera Wang design, and the designer even made a cameo in her "studio" (read: soundstage) in last week's episode.

We're guessing this week's episode won't show Blair and her minions swiping their credit cards at the local David's Bridal (they probably don't even know where to find one).

But we know where you can get the dresses for yourself: at DavidsBridal.com, where the pink poufy frocks are now retailing for $198. Although the Daily Mail reported last week that the dresses were sold out, it looks like David's Bridal wisely restocked before the episode airs next week.

Get 'em while they're hot... and read more of Refinery29's chat with Daman here. 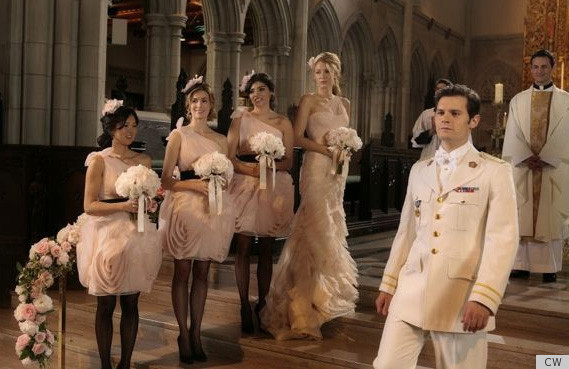