That's right, in an effort to make Chuck feel again, Dan Humphrey gets him a scraggly-but-adorable mutt that can lick Chucky's tears away when he cries (we'll get to that later) and is named Monkey!

Oh and Blair finds out who her baby-daddy is in a surprisingly un-Jerry-Springer-like reveal, but pish posh. PUPPY. 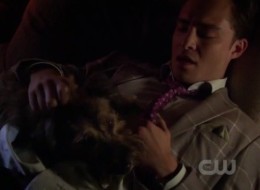 Now, back to business.

Even though the doctor's office calls Blair four times (sure they did) to make sure that she's picked up her paternity test results, the princess-to-be is still hesitant to discover her baby-daddy's identity. Blair sits around procrastinating and avoiding the Dorota/Dan dynamic duo, but she also spouted some of the episode's best one liners:

Poofy haired Dan has denial issues too about the book-that-shall-never-be-read. Dan goes to an old mentor who advises to let it print since nobody will read it anyway. He then calls the publishers to take credit for the anonymous work himself. When Dan finds out, he realizes he does want recognition for his masterpiece and calls his mentor out at a dinner party with his lit posse. But that was his mentor's plan to begin with! Dan receives a fully finished copy of his book, with his name, that night in the fastest book turnover since Snooki's "A Shore Thing."

In other job news, Nate shows up on his first day interning at Cougar Elizabeth Hurley's ambiguous online media publication looking like an extra from "Wall Street 2." (Take it from a former newspaper intern, Nate, skinny jeans and ironically patterned socks are a more appropriate uniform.) Hurley's first assignment: "make me scream." She then fires her entire staff of senior citizen reporters and editors so that they can't hear the aforementioned screaming. Nate suspects she, gasp, hired him for sex. Cougar Hurley assures him that this is not the case and lets him try out his reporting chops at a cell-phone-free charity fashion show she's throwing.

Meanwhile, Charlie/Ivy worries about being in New York. Cue Serena: "Woah, that is not the look of a girl in an Empire state of mind." Profound. But S tells her "cousin" not to worry about the breakdown she had last time she was here since losing it "is practically a rite of passage, like a bar mitzvah.”

Still, Charlie/Ivy decides her life of conning is too dangerous and tells the gang she can't stay since her "mother" wants her out of NY -- also calling her chef boyfriend to say that she made a mistake and is heading back to Portland because she loves him. Then she finds out that Serena pulled some strings to have her walk the runway at the Coug's fashion show. When Blair asks if there's some way Charlie/Ivy can blackmail her "mom" into letting her stay it's bye-bye boyfriend, hello New York!

Sidenote: is anyone wondering where the real Charlie is? Just saying.

Speaking of ignored characters, Lily's back. Apparently she's been sitting at home reading "Crime and Punishment" and playing "Angry Birds" for the last few episodes. But never fear, Rufus was able to sweet talk the judge into letting Lily out of house arrest early (I still think the hospital following up with Blair multiple times was less credible) so that she could attend the fashion show everyone's going to. When her sister, Charlie/Ivy's fake mom, calls, Lily invites her to tag along. This couldn't possibly go poorly.

Now, off to the fashion show!

In short: Charlie/Ivy runs into her "mom" but threatens that unless they keep up the act, she'll spill the beans. Hurley steals the cell phones that everyone, including Charlie, checked so that she can steal their secrets and become the next Gossip Girl (huh?). Dan gets Blair to check the paternity test.

And now, the moment we've all been waiting for… Chuck isn’t the father. Blair goes to him directly after reading the test so he doesn't worry the baby's his. Then we all proceeded to emotionally crumble as the scenes switched from a tres happy prince/father-to-be to a crying Chuck, kissing the forehead of his new dog.

What do you think? Blair did hide the paternity test results in drawer (hasn't she ever watched the things that goes down in this show?!?) -- when do you think the prince will find out?

Suspected Half Moon Bay Shooter To Be Charged With Murder