That's right, after Blair tried to hijack Dorota's OBGYN appointment -- asking when they could determine the baby's father as Dorota has "had a few one night stands with the staff of our building" -- Blair confessed that she is with child.

Though, I'm not going to be convinced of the pregnancy until I see Blair pee on a stick. Why can't she just be discovering a gluten allergy? Not only would it explain the nausea (see our slideshow of our favorite Blair nauseous faces below) but it's so trendy among 20-somethings!

Less trendy: being just shy of a teen-mom on the Upper East Side. Unless you're Dorota, who reacts to the news by squealing, "We are like sisters." Which was almost as inappropriate as the maxi-pad that she appeared to be wearing on her head for her trip to the doc. (A versatile piece that easily translates from dusting shelves to getting your ovaries checked?) 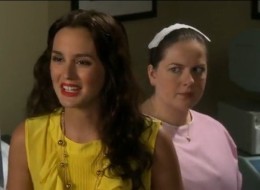 But I digress. Blair is experiencing morning sickness all day, every day, and these frequent trips to "les toilettes" makes Louis' sister Beatrice suspicious that Blair might be on drugs. Scratch that, it's bulimia. Wrong season, princess. Beatrice spends the rest of the episode trying to force feed Blair in front of Louis to prove a point, and Blair spends the rest of the episode trying to find a place to throw up. Blair finally succeeds in commandeering a bathroom with the help of Dan (who, in jeans and a t-shirt, looked sorely out of place at a royal event at a church). Dan also thinks Blair has returned to her I'm-going-to eat-a-whole-pie-and-then-throw it-up season one tendencies until she admits she's pregnant.

Even though Beatrice overhears the announcement, she doesn't tell Louis because, as she later confesses to a Ken doll-like minister in a limo, a royal baby will make the queen like Louis/Blair even better (why is everyone so onboard with this premature pregnancy?) and she wants to dishonor them/steal the crown. Then Beatrice sticks her tongue down the priest's throat. Of course.

Outside the pregnancy storyline:

Now, check out our favorite screen grabs of Blair when she's nauseous!