And so it ends -- not with a bang but with a whimper. Though I watched the "Gossip Girl" finale while sleep deprived after an international flight, I've been ruminating on it for a day (which, let's be honest, is far more examination than it deserves), just to make sure I couldn't blame the episode's awfulness on my delirium.

We all knew that the series finale wasn't going to be good -- it's still the same writing team who led us down this merry, Sage-filled path all season, after all -- but I guess I wanted to give it more credit than it actually merited, as if the producers were going to pull an eleventh hour 180 and address all the insanity, self-indulgence and mind-boggling characterization we've suffered through for the past few seasons.

Alas and alack, the writers knew that those who have remained loyal to the show for the past six years, masochists that they are, only wanted two things -- their favorite couples together and an answer to the mystery that has plagued us for years: Who is Gossip Girl?

Called it. And really, who else could it have been but our curly haired, porcelain-skinned Lonely Boy, so prone to introspection and so psychotically obsessed with social status? Unlike Mayor Bloomberg and Blair, did we ever really think it could be Dorota? Out of our core five, Dan was the sensible choice, so I had no issue with the logic behind the reveal -- my problem was with everyone else's reaction to the reveal.

Really, Serena, everything Gossip Girl ever posted about you and your friends was a love letter? Suspension of disbelief has always been a necessity when watching this show, but it requires some serious retconning to justify anything that Gossip Girl wrote as positive or well-meaning; Dan created a culture of stalkers, sycophants and social-climbing wannabes, teenagers who spied on each other, stole from each other and publicly humiliated each other, and it's frankly reprehensible for the show to attempt to whitewash all of that for the sake of tying things up in a neat, happily ever after bow.

But what else did we expect from a show that turned its date-rapist villain into a romantic hero and its supposed heroine into a mindless apologist who will forgive any cruelty as long as the perpetrator professes to love her? (I mean Serena, but yes, that could just as easily apply to Blair.)

Certainly, Chuck has evolved over the seasons, and perhaps one could argue that he's earned his redemption -- although the writers have been so wildly inconsistent with his characterization and so quick to have him regress to petty vindictiveness when he's hurt, it's debatable whether he's actually learned anything -- but there's no way that Serena, Blair, Rufus or anyone else should forgive Dan for publishing their dirty laundry for public consumption and endangering their lives and livelihoods as a result.

Insisting that Gossip Girl wouldn't have had any power if people weren't spiteful enough to send in tips is just willful ignorance -- people will always be petty and awful if given the chance (especially teenagers), but that doesn't mean you'd give an alcoholic a bottle of scotch and put them behind the wheel of a semi truck. Enabling bad behavior isn't any better than committing the crime yourself, and Dan did both -- he's been pretending to be something he's not for six years, spying on his so-called friends from inside their inner circle and betraying their trust every day, and that shouldn't be so easily forgiven or forgotten. If "I just wanted to be popular" was a get out of jail free card, we'd all be using it.

Also, is anyone tempted to go back and rewatch the whole series and count the inconsistencies, like how Dan would be able to send all those Gossip Girl blasts while with his girlfriends (they couldn't all be pre-scheduled) or how Jenny blatantly didn't want Blair to destroy her life and drive her from the city? Good luck, god speed, and if you really are that masochistic, at least make it into a drinking game.

I'm not mad, I'm just disappointed. Still, while I was hoping for better, I expected the worst, and I'm certain that the show's hardcore fans just wanted that happily ever after (provided by the coda set five years later, which showed Dan and Serena tying the knot, surrounded by friends, family and Lisa Loeb, natch). Sadly, none of them give a damn that this show treats its female characters like emotional punching bags -- hell, even Lily went back to scheming, thieving William, who knocked up her sister and tried to con her out of millions.

And apparently, William was only sleeping with Ivy to get closer to Lily, duh, because on the Upper East Side, logic is for people without trust funds and the best way to achieve your goal is to screw your way towards it. So basically, we were subjected to Ivy hooking up with two Dads I Wouldn't Like to F--- all season because no one pushed Bart off a roof sooner. Thanks, writers -- your attention to detail is your most attractive quality!

So what did the season finale get right? (Or at least less offensively wrong.) The cameos from Bloomberg, Kristen Bell, Rachel Bilson and some of the show's dearly departed alums like Jessica Szohr, Katie Cassidy, Willa Holland, Ella Rae Peck, Taylor Momsen and Connor Paolo were a nice touch (though I'm shallow and wanted Kevin Zegers and Sebastian Stan), as was the amusing ad for "Ivy League," supposedly starring Lola Rhodes and Olivia Burke and based on Ivy's "bestselling autobiography." I had completely forgotten that Lisa Loeb cameoed in a 2008 episode and had allegedly dated Rufus in the past, but apparently the writers remembered that much, even if they spent the entire series unable to remember whether Blair was being a bitch or a doormat that week. So ... kudos, I guess.

Possibly the best decision the show made was ensuring that Nate didn't end up with Sage, lest viewers feel compelled to use hydrochloric acid as eyewash (although if Ivy's relationship with Rufus didn't elicit that reaction already, I guess nothing would). On the other end of the spectrum, the episode's flashback to Serena and Dan's first meeting was hilariously awful, but still kind of fascinating as the show attempted to replicate the stars' Season 1 hair. (Ed Westwick looked like he was wearing a giant tarantula.) At that point, I guess the actors could smell their freedom, so they embraced the ridiculousness with both hands. I'm not dead inside, so I'll also admit that the flash forward to Serena and Dan's wedding day was sweet, though you'd have thought Blair and Chuck could've come up with a better name for their kid than using Chuck's alias from when he tried to quit the Upper East Side and hooked up with Eva in Europe. And no couple on the show has ever made more sense than Georgina Sparks and Jack Bass.

As series finales go, it seems like "New York, I Love You XOXO" ticked all the boxes for loyal fans -- tying up the remaining loose ends, satisfying the shippers and letting someone else assume the Gossip Girl mantle, because evil never dies. Or "you're nobody until you're talked about" -- take your pick.

If you were looking for depth, morals or solid characterization, the "Gossip Girl" finale didn't provide them, but then again, the show never has, so let's simply be grateful that we can say XOXO to the series for the last time, and never speak of it again, unless you catch the Season 1 reruns in syndication.

What did you think of the "Gossip Girl" series finale? 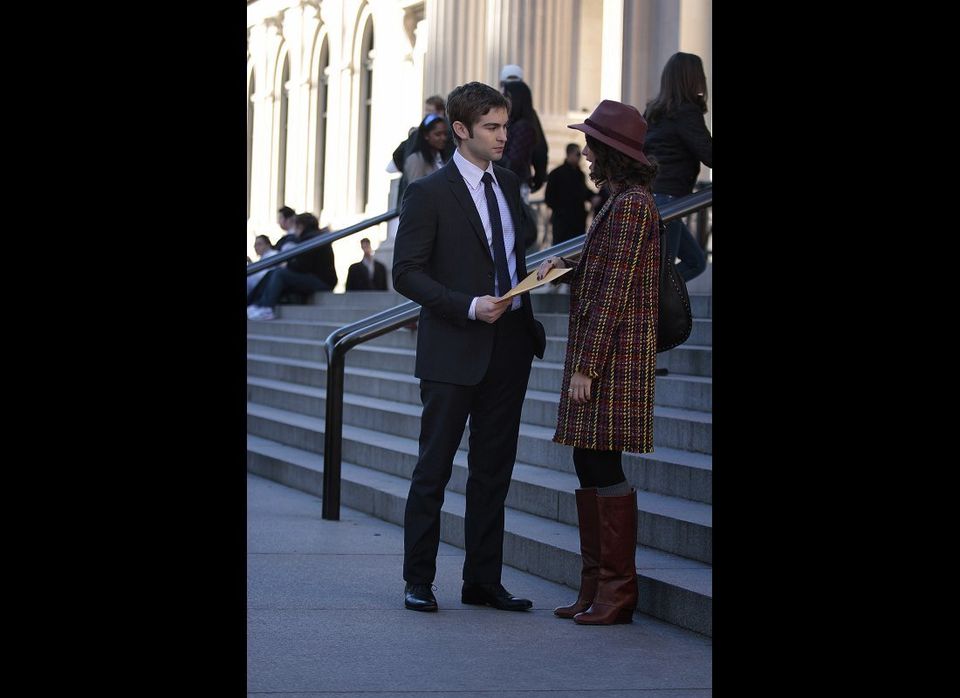 1 / 20
"New York, I Love You XOXO"
Pictured (L-R): Chace Crawford as Nate Archibald and Sofia Black-D'Elia as Sage.
The CW