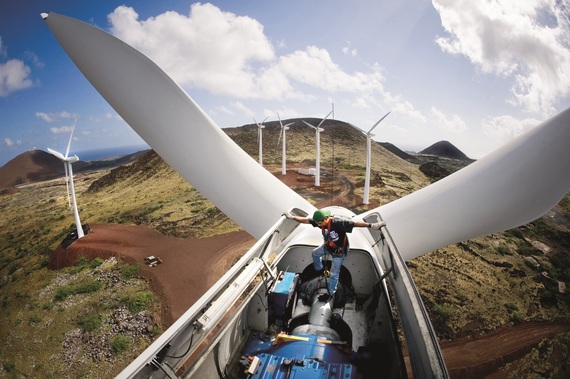 For four days this May, Portugal's 10.5 million residents relied entirely on clean energy to power their homes and businesses; Portuguese wind, solar, and hydropower facilities supplied enough juice to power the nation for a record 107 hours straight. On an unusually blustery day last year, Denmark's wind farms supplied 140 percent of that nation's electricity demand. And tiny Costa Rica derived 99 percent of its energy from renewables in 2015.

Stories like these make many clean energy-minded Americans jealous. Federal action on wind and solar in the United States has been historically slow and inadequate. A disheartening number of U.S. lawmakers still won't even accept the urgent need to lower carbon emissions by accelerating our transition away from burning fossil fuels.

Across the U.S., however, a little-known policy has played an outsized role for decades in helping states to ramp up renewable energy. So-called "Renewable Energy Standards" (sometimes also known as Renewable Portfolio Standards) are market-based policies that require electricity providers to gradually increase the amount of wind, solar, and other renewable energy sources in their power supplies. More than half of all U.S. states already have them. And, according to a study released earlier this year by the U.S. Department of Energy, these policies have led to enormous benefits.

States' adoption of renewable energy standards have led to reductions in air pollution and carbon emissions that have saved an amazing $7.4 billion in public health costs, the study says. Energy consumers have saved $1.2 billion as their utility bills have decreased. And these standards have supported nearly 200,000 well-paying jobs in renewable energy--a fast-growing sector that outpaced oil and gas in job creation for the first time ever last year.

Renewable energy standards have also helped clean energy become cheaper and more competitive: as more states have adopted policies promoting wind and solar power, the costs of these renewable energy sources have dropped dramatically. Wind energy has seen a 40 percent decline in costs since 2009, and the average solar photovoltaic installation cost half as much in 2014 as it did in 2010.

The cherry on top of the clean-energy sundae: these standards were enacted across the nation in the early 2000s under a federal administration in thrall to fossil fuel industry interests and often hostile to scientists and policy makers calling for action on global warming. The heartening lesson is that it's possible to cut emissions and increase our reliance on renewable energy--regardless of the president, Congress, Supreme Court, or even partisan gridlock.

Spreading across the country

Conceived of in the 1990s as a response to the nationwide deregulation of electric utilities, state renewable energy standards (RES) were pioneered by a group of energy researchers in California, who spotted an opportunity to make clean-energy lemonade out of deregulatory lemons. They created RES as a market-friendly mechanism to ensure investment in renewable energy--which could be used as leverage for utilities attempting to get out of state regulations. While RES didn't immediately catch on in California, environmental groups including the Union of Concerned Scientists saw their potential, and began a campaign to try to implement them as a condition of deregulation for state utilities.

In 1997, Massachusetts became the first state in the country to adopt RES. Over the next 15 years, clean-energy advocates slowly and steadily built on this success, conducting research and analysis for dozens of individual states on their capacity for renewable energy--and on the consumer, job, environmental, and health benefits associated with implementing the standards. These efforts were rewarded with a boom: between 2004 and 2009, renewable energy standards spread to New Mexico, New Jersey, and many other states. As early adopters led the way, proving that renewable energy targets were affordable and achievable, more states signed on. Today, 29 states and Washington, D.C., have implemented renewable energy standards; an additional eight states have set nonbinding renewable portfolio goals.

Even more encouraging than the sheer number of states with these policies are the many states that have revised their RES to increase the percentage of clean energy in their electricity generation mix. California began with a target of 20 percent renewables by 2017; last year, the state bumped it up to 50 percent by 2030. Today, Hawaii has set the most ambitious requirement of all: its standard calls for powering the state with 100 percent renewable energy by 2045. And other states are rising to the challenge: Vermont's first-ever RES requires 75 percent clean energy by 2032.

Does your state have RES?

Unfortunately, some states continue to oppose renewable energy standards despite their overwhelming record of success. Some state legislators have deep ties to fossil fuel companies, and won't support renewable energy to avoid alienating those interests; some resist nearly all regulatory intervention in business. Some states have even backed out of their commitment to clean energy, and either loosened or eliminated their RES: last year, West Virginia became the first state to repeal its RES, and Kansas changed its policy to a nonbinding goal. In 2014, Ohio froze its RES for two years, and its legislature is attempting to extend the freeze.

Nonetheless, with more renewable energy resources becoming available across the country and an increasing amount of data documenting the success of such standards, there are signs that the nation is reaching a tipping point, as states ramp up their commitments to RES. With more than half the country thriving through better jobs, better health, and cost savings as they rely more and more on renewables, the other half may demand their legislators join the party as well. If you're not sure whether your state has RES in place, check out this guide from the National Conference of State Legislatures. If it doesn't, call or write your legislator to find out why not.

Americans desperately need to make a transition to a clean-energy economy to mitigate the worst consequences of global warming. Partisan politics aside, state renewable energy standards are working. Someday, as clean, renewable energy prevails across the nation, RES may become a footnote in the history of U.S. energy policy. But we're not there yet. In the meantime, state renewable energy standards are proving to be one of the most powerful and pragmatic tools we have to get us closer to a fossil fuel-free future.