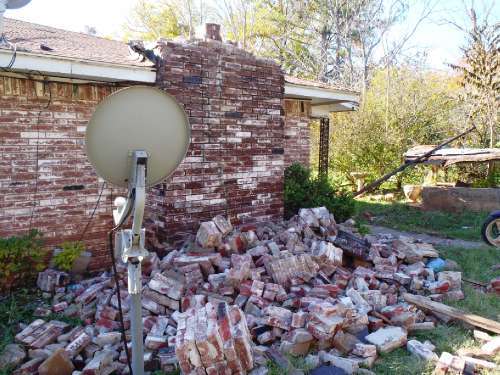 For years, Oklahoman homes and nerves have been rattled by a series of ever-more-frequent earthquakes: in 2015 alone, 857 earthquakes in the state registered 3.0 or more on the Richter scale. Today, it's not just homes being shaken up. Public outcry and a series of new lawsuits are finally forcing Oklahoma officials to address the quakes, and their root cause.

Until 2009, Oklahoma experienced an average of just two earthquakes per year with a magnitude of 3.0 or more. But that was before a dramatic increase in hydraulic fracturing in the state led to the drilling of thousands of deep injection wells to dispose of so-called wastewater--the brine or sludge collected with oil in the hydraulic fracturing process. Unlike other wastewater associated with fracking, this sludge cannot be reused.

Given the quantities involved, the most economically feasible option for oil and gas companies is to use gravity-fed wells to pour it deep into the ground, beneath Oklahoma's aquifers. Just last year, oil and gas companies in Oklahoma poured 1.5 billion barrels of this wastewater sludge back underground--the equivalent of roughly 3 million swimming pools' worth.

Scientists say that there's little doubt that the more than 400-fold increase in earthquakes in Oklahoma in recent years has been induced by wastewater disposal. And the U.S. Geological Survey warns that the dramatic rise in tremors greatly increases the risk of a major catastrophic earthquake in the state, whose infrastructure is not built for such major events.

Amberlee Darold, a former research seismologist with the Oklahoma Geological Survey (OGS) who now works for the U.S. Geological Survey in the Pacific Northwest, says that the reluctance to act was ingrained in the system during her tenure at the agency.

Darold, who joined the OGS in February of 2014--well into the recognized surge in seismic activity--says that the official silence around the cause of the earthquakes surprised her.

Oklahoma has been oil and gas country since before it was a state: in the early 20th century, its territory produced more oil than any other area in the United States. Many years after the conventional oil boom slowed to a trickle, unconventional oil and gas extraction--hydraulic fracturing of shale formations--provided a new boom. An estimated one in five Oklahomans work in the industry today. And oil and gas executives have close ties with Oklahoma legislators and regulators--meaning that all those empowered to act had powerful incentives to drag their feet, or even to pin the quakes on another cause.

Examples of this hesitation can be seen throughout Oklahoma state politics. After taking office in 2010, Governor Fallin delegated responsibility for the quakes to the OCC. But, until last year, the agency appeared toothless, asking companies to voluntarily comply with their recommendations for wastewater injection. Last year, Fallin, who also serves as the commissioner of the Interstate Oil and Gas Compact Commission, even signed into law a bill that prevents towns, cities, and counties from banning hydraulic fracturing and other oil and gas activities.

Darold says she could see the intertwined political connections even closer to home in her work at the state agency. The OGS is headquartered at the University of Oklahoma and affiliated with its Mewbourne College of Earth and Energy--named after the Mewbourne Oil Company, a prominent oil and gas producer in the state.

As a research seismologist, Darold says her duties included monitoring seismometers statewide, collecting and analyzing their data--and more and more frequently, handling inquiries from the media, speaking to the frightened public, and delivering bad news to politicians. She also attended frequent briefings with the OCC, the regulatory agency. Darold loved the field work, but became increasingly frustrated by the politics.

"We were persuaded to not be so open when giving public presentations or speaking to the media," Darold says. "We would get reprimanded by the director, and/or the dean, if an article came out that mentioned fracking or wastewater management in conjunction with earthquakes."

Darold says that it wasn't until April 2015, six years after the initial increase, that she was asked to co-author an official OGS statement--subjected to several rewrites by her superiors--confirming that the Oklahoma earthquakes were induced by human activity, namely wastewater injection. Only several months later did Governor Fallin follow suit, releasing a statement also confirming the link.

Darold is proud of her contribution to helping the state face the science behind this issue: She didn't sugarcoat her findings, and by the end of her tenure with the OGS, she says leadership was ready to acknowledge the truth and take action.

"I didn't quiet my voice when it was suggested by industry that maybe it was this [reason] or that [behind the quakes]--or even the Oklahoma Corporation Commission wanting to find other ideas of what it could be. By the time I left, things were going in the right direction, and quickly," she says.

Will 2016 be the year Oklahoma state government officials, including the Oklahoma Corporation Commission, finally take action?

One particularly contentious issue is that not all of Oklahoma's fracking wastewater is homegrown. Other states that have confirmed links between wastewater injection and an increase in earthquakes have issued partial or full moratoria on wastewater injection--and sent their own wastewater to Oklahoma instead. In 2012, for example, Arkansas sent nearly all of its wastewater to be disposed of in Oklahoma. And the state is still accepting more, despite calls for the wells to be shut down.

Ultimately, relationships between the state government, the OCC, and the oil and gas industry in Oklahoma remain so interwoven that Darold says any solution to preventing the earthquakes will require all parties to work together.

"If only industry had started doing this in 2009, when they started noticing the uptick," says Darold. "It's never too late, but certainly they'd be a lot further ahead of the game than they are now."

As she notes, regulations won't help unless geologists can determine which injection sites are triggering which fault lines. Other states that have shut down their wells have seen a dramatic decline in earthquakes; while the governor and/or the OCC could order a shutdown, it's unlikely that they will without some kind of agreement from industry.

"I still have faith that they'll continue working together to come up with a solution, with the community in mind," Darold says. "Industry is so important to the state--but at the same time, so are your citizens."