I first became acquainted with the Gotham Chamber Opera just over 10 years ago when my best friend Georgia was hired to sing a role in their inaugural production; Mozart's Il Sogno di Scipione, directed by Christopher Alden. At the time, all I knew about the proceedings was that my friend was participating in something that seemed to have quite a bit more downtown cool than the other opera experiences I'd had up to that point. I knew she got to wear a fabulous lime-green dress and strip down to her underpants while she sang some fiendish Mozart coloratura. It was performed in a small jewel box theater on the Lower East Side, and there was something relentlessly stylish and chic about the whole endeavor, mixed together with really excellent young singers, performing a rarely heard Mozart opera. 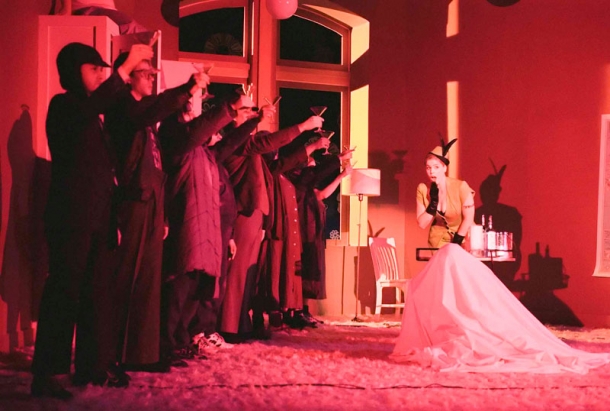 Then, I watched in wonder, over the next 10 years, as founder and artistic director Neal Goren built a company that never lost that downtown-cool feel, but grew into a legitimate part of the cultural landscape of New York City. I was seriously amazed to watch the small company grow, while maintaining relevancy and artistic excellence in the midst of an economy so challenging, other companies around the city and country were facing extinction. His model of small, chic, thought-provoking productions, combined with musical intelligence featuring emerging talent, and creative, forward-thinking directors, proved a winning combination. And one word in the title of his company seemed to allow him to grow and sustain despite the obstacles of producing the most expensive art form in the most expensive city in a near economic depression: chamber. It made me wonder -- should this be a new model for arts organizations trying to make it in the 21st century?

Because he limits the scope of the company to operas that are considered chamber operas -- which basically just means operas without gigantic orchestras created for intimate spaces -- he not only fills a particular niche, but keeps his opera company from going off the rails and getting too big for its britches. He keeps things streamlined, but always interesting and innovative. His choices run the gamut from Baroque to world premieres, and he continually discovers and presents singers who deserve notice.

I had my first personal experience with the company this past month when I participated in a program they presented at Le Poisson Rouge entitled Orientale, with music inspired by the East. Although the company had to postpone its fully staged opera, which had been slated for the fall, due to scheduling conflicts, they still chose to do something innovative and creative, with a program that combined opera, art song, dance, Baroque musicians and an Armenian instrumental group. Staged and choreographed by Austin McCormick, with members of his sexy modern/Baroque dance troupe Company XIV, the Gotham Chamber Opera was able to yet again provide its audience with something new and different, while maintaining its standard of artistic excellence with fabulous young singers, who you may not have heard of yet, but will soon (along with some old pregnant lady who presented yet another costumer with a large round challenge -- that would be me for those of you who haven't read my personal blog entries).

After watching the company truly become an important fixture on the New York Arts scene, I was interested in finding out from Neal Goren how he managed to create a company from scratch that has been so successful in such difficult economic times. Here's what I asked him:

Jenny Rivera: Whatever possessed you to start an opera company 10 years ago? You must have felt that it was a pretty daunting task to try to find a way to produce such an expensive art form in such an expensive city, and yet you did it. What was your inspiration?

Neal Goren: No task is overly daunting if you break it down to its component parts and tackle them one by one. At the time, I really wanted to find a way to hone my conducting skills and I was unable to interest others in hiring me, so I decided to create the conditions whereby I could achieve my personal goals. I also knew myself well enough that I would have been very unhappy working with the level of singers and productions that one tends to be given as a beginning conductor, and by founding my own company I was able to ensure a level of quality control that I found appealing. 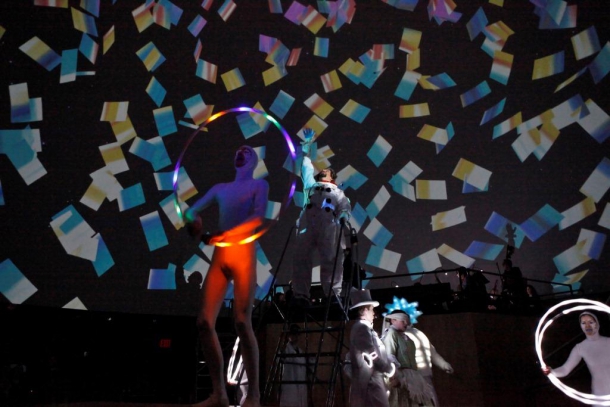 JR: Now that you have such a successful track record, I'm guessing it's not a big challenge to lure interesting and well-known directors into working with you. But how did you manage to start out with such a bang? What were your conversations with Christopher Alden like that caused him to want to come on board at the very beginning with Sogno di Scipione?

NG: Christopher was already a friend of many years when I approached him about directing Gotham's first production. He was very resistant at first to the idea of working for a company without an established infrastructure, and indeed turned me down summarily. So, I had to trick him into it. He did not know Il Sogno di Scipione, so I enticed him by saying it was a masterpiece, but had not found a place in the repertoire because it was considered unstageable. Christopher took this as a challenge to his skill as a director, and the challenge (in combination with his reaction to the quality of the music) eventually outweighed all his hesitations. He seemed to respond to my philosophy that the only thing worse than no opera is bad opera, and agreed to help me produce something of quality. I cannot overstate my debt to him in educating me in what it takes to produce quality opera and in helping me create an infrastructure to accomplish it.

JR: What's your process for picking repertoire -- you've had success with everything from Baroque operas to, more recently, the world premiere of Nico Muhly's Dark Sisters. From what I've seen over the years, everything you pick is not only interesting and slightly different, it's something that people might not even realize they want to see or hear, but that nobody wants to miss out on. What's your process for finding such interesting repertoire?

NG: I've always been drawn to the unknown corners of the repertoire, first as a solo pianist, then as a recital accompanist for string players and singers and ultimately as an opera conductor. I trust my musical judgement and feel that if I am excited about a composition, others will be too. That has largely proven to be the case. These days I meet with my expert team at Gotham to discuss how a given opera would fit into our overall programming with regard to the period of the composition, the directorial approach, the cost of mounting it and its marketing potential.

JR: It seems to me that you have a particular aesthetic when choosing directors. All the productions I've seen at your company have been extremely stylish and visually interesting without jumping into the realm of "Euro-trashy." They sort of remind me of your East Village roots -- cool, without trying too hard. How do you pick your directors, and maintain this chic aesthetic -- is it even on purpose, or is that just your personal taste?

NG: Actually we began even farther downtown, on the Lower East Side, which was then decidedly uncool: dumpy, in fact. We were lucky that as the neighborhood's reputation grew, we were painted by the same brush in the public imagination. It did not hurt that I was able to persuade brilliant directors to collaborate with us (by promising a level of artistic input that other companies were loathe to offer them). I have always thought of music in dramatic terms and attend a lot of theater, so it wasn't such a stretch for me to marry my repertoire choices to the right director, and I have never had any fear about giving proven theater directors, choreographers and puppeteers their first shot at directing opera if I respect their artistic integrity and find them to have a musical bent. 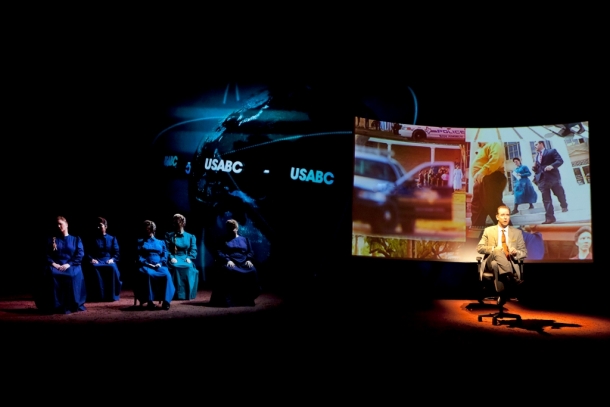 JR: I remember you telling an interesting story once about how you actually got the company its original funding -- it had to do with calling everyone you know and then at least five people they knew or something. Can you share that story?

NG: Sure. When I had the crazy idea to found what became Gotham Chamber Opera, I realized that it could not be accomplished without significant funding. And I was well aware that, having spent my entire career in the practice room or on the stage, I knew no one personally with the means to contribute on that scale. I was certain, however, that someone I knew would know someone with sufficient connections who would be willing to set the ball in motion. My first task was a research project, to learn who the movers and shakers were in the NYC cultural scene. After reading the donor lists of institutions that I thought might share my sensibilities and consulting society pages, I compiled a list of about 15 likely future Gotham enthusiasts. I then spent the next six months asking everyone I knew whether they were personally acquainted with anyone on the list. It was a frustrating time, as I had no luck anywhere. One day I was recounting my plight to a close friend from college in Portland, Oregon, who asked me to list the names, and to my total surprise it turned out that someone who figured prominently on my list, Brooke Hayward Duchin, was his mother. Eventually I met Brooke, and we hit it off. She then introduced me to her large circle of friends (including Karen Lerner, who became our first board president), and the network began.

JR: Finally, what is your advice for creating a cultural organization that can not only sustain but grow even in this scary economy? You've done it -- how?

NG: My advice is rather old-fashioned: focus on the quality of the product. People respond to quality, and want to be involved with it.

I'd also like to pass on Leonard Bernstein's advice to me when I started conducting: "Surround yourself with the best people, and let them do their jobs." Wiser words were never uttered. To this I would add, "have the humility to trust their expertise and listen to their advice."

JR: I would also like to ask David Bennett, Executive Director of Gotham, the same question about growing a company even in difficult circumstances.

David Bennett: First and foremost, any new organization needs to be very clear about their mission. Success at any time, and particularly in the current shaky economic climate, is largely dependent on a clear mission that sets the organization apart from others. For us, this meant choosing to only produce operatic repertoire originally intended for small venues. So we steer clear of reductions of standard works; and thus, we're seen as complimentary to the big companies in New York -- rather than competition -- by audiences and by donors.

Second, commit to the highest level of artistic excellence possible, from the very beginning. The first impression that you make will stay with you for a long time, so do everything in your power to guarantee that you start with a bang.

A company that stays true to a clearly defined mission and demonstrates artistic excellence will be on the path to success in any economy.