Holy Adios Amigo & An-Ego, Batman, the Mayor of Gotham City has finally cut ties with their newest nemeses-- no, it's not "The Penguin." This is a bird of a different feather who has become known as "The Donald," an angry orange-faced fowl with a hideous hair-do (or hair-don't?). "The Donald" is an odd hybrid bird with a large bill and big mouth who, instead of quacking, prefers to tweet, squawk, screech, shriek, and squeal. He doesn't waddle, but rather struts like a bantam rooster, acts like a cuckoo, and exhibits vulture-like tendencies. He thinks of himself as the goose who laid the golden egg, but others simply describe him as a big turkey or as a bird-brained bigot. Large eagle or ego? (Ok, that pretty much exhausts the Big Bird metaphors.)

Mayor Bill de Blasio admits that "The Donald" has his claws on the city's Big Apple and won't let go! Mayor Bill says even he is powerless to cancel existing contracts with this egomaniacal entrepreneur. However, the Mayor vows that from this day forward, Gotham will not do any more business with "The Donald."

In the meantime, "The Donald" can continue to conduct his metropolitan enterprises, which includes two of Gotham's ice skating rinks, the Central Park carousel, and a golf course in the Bronx, thus giving him access and control over some of the city's favorite family recreational facilities! Oh, the humanity! Never mind Car 54 Where Are You? Batman-- fire-up the Batmobile!

"The Joker," "The Riddler," and even "The Penguin" are envious of "The Donald's" devious deeds and self- proclaimed vast empire. (Although, according to Forbes, it's a really a half-vast empire-- they estimate his net worth to be less than 50% of "The Donald's" Ten Billion Dollar boast.)

But who is "The Donald?" Is he really that bird-brained bragging billionaire bad boy, Donald J. Trump, the same guy who ridiculed a war hero and humiliates his enemies with such classic put-downs as "dummy," "clown," "joker," "lightweight," and "loser?" Is he man who labels Mexicans as criminals and rapists? Is he the ego manic who names nearly every property he owns after himself? Is "The Donald" that part-time beauty pageant promoter, Chinese-made shirt and tie peddler, and reality TV jester Donald J. Trump?

And why does "The Donald" behave so badly? Why is he so bitter and angry? Is he livid because NBC, Univision, NASCAR, ESPN, NYC, Macy's, and many others simply aren't buying what he's selling? Or could he still be suffering from the horrific lingering pain that got him a medical deferment from the draft? (In all fairness, he does show considerable battle bravado in a war of words.)

What causes him to lash out at President Obama, Hillary Clinton, John McCain, Mitt Romney, Rick Perry, Scott Walker, John Kasich, Marco Rubio, John Huntsman, Rick Santorum, Carly Fiorina, George Will, Charles Krauthammer and anyone else who dare challenge his status and authority? Why did he choose to publicly release the private cell phone number of Lindsey Graham and encourage the good citizens of Gotham to call the number? What other sinister plots and sappy photo-ops does "The Donald" have up his sleeve?

While it's unclear what made him the way he is, we all know what he's after-- fame, money, and power. More! More! More! Even the Presidency is on his wicked wish list!

Batman, how can you stand idle while this villain does these dirty deeds? Commissioner Gordon, call the Caped Crusader-- Chief O'Hara, dial the Dynamic Duo-- our city and nation needs them! When will our national nightmare end? 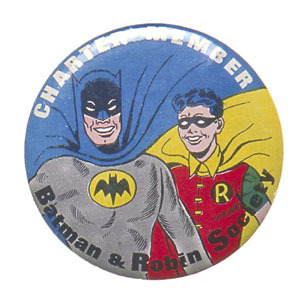