I spent two weeks in June wandering around Prague and Budapest, seeing the sights and looking for folk and folk-inspired music. I came back with a satchel of CDs, some of which I'll share here in a series of posts. For this one, I'll talk about CDs that mix early music with traditional folk and other elements.

One Czech group that surely has the potential to transcend the Czech market, Euphorica, remind me of Mediaeval Baebes, whom I interviewed a few years back. Made up of four women (and sometimes one man) who dress in elaborate medieval costumes while singing and playing a variety of medieval and modern folk music, they're a treat for the eyes and ears. Their brand-new album Archa is a multicultural mix of European folk and early music. The four Czech folksongs include "Stojí Hruška," a piece with a sad text and a majestic melody that, through the version by Čechomor, has become one of my favorite songs. My other favorites include "Tri Martolod," a Breton ballad made famous by Alan Stivell, and "Yo Me Soy La Morenica," a cheerful Spanish song from the Renaissance Cancionero de Upsala, which borrows imagery from the Song of Solomon. They perform two Italian pieces (one modern and one medieval), a Medieval Latin Christmas carol, a Serbian song, and a Macedonian song, and top it off with a bonus track: a cover of Nick Cave's "Into My Arms." Their main instruments are cittern, recorders, shawms, and ethnic percussion, which gives them a nice combination of sharp and sweet timbres with crisp, snappy rhythms and tight vocal harmonies. Look out for them, starting with their promo video:

Grál and Bohemian Bards are two related bands, or maybe two lineups of the same band. I encountered them busking in Prague's Old Town Square, which acts as a music showcase all day and into the evening. It's hard to ignore guys dressed in rustic medieval garb, especially if they're playing bagpipes. They happily sold me both Grál's optimistically-titled CD I, and the Bohemian Bards' CD The Roots of Grál. Grál's CD showcases a fun band of a type common on the German and Czech "medieval market" scene: fronted by bagpipes and shawms, backed by enthusiastic drums, with cittern, fiddle, and recorders, this is a branch of the same tree that produced Corvus Corax, Subway to Sally, and Van Langen. It seems to be a "live in the studio" recording, with the typical production limitations that implies. As such, it's an impressive debut. The band sings in several languages; a version of "Maravilos" is particularly impressive for its use of recorders, violin, cittern, and drums behind the medieval Spanish words, and "Batalion," which appears to be Medieval Spanish words set to Pierre Attaignant's "Tourdion," is equally good. "Ai Vist Lo Lop," the infectious Occitan children's song about a wolf, a fox, and a hare (which made it into Cajun music as "J'ai Vu le Loup") is another fun one, making Grál I an enjoyable, if short CD. The Roots of Grál is stronger in the production department; it maintains a nice separation among the instruments, and you can hear the various drums popping and pipes trilling with precision. It leaves no doubt that these are very accomplished musicians. However, the violin and recorder are each featured only for a brief moment, making the album essentially one of bagpipe and shawm music with drums and vocals. The lack of variety hurts it a little, but it's still a fun listen, and I hope to hear more of them someday. 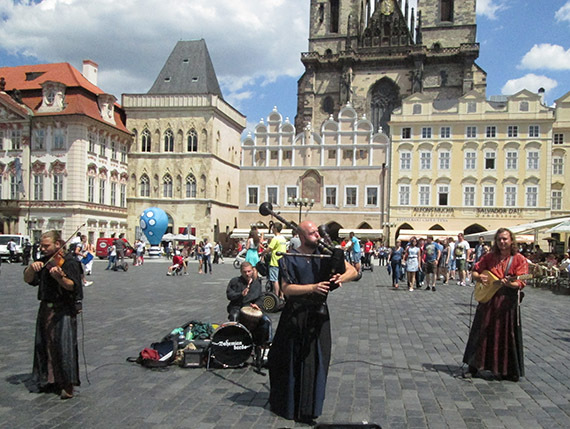 Hungary's answer to the "medieval market" style is Igriczek, a six-piece band that blends pipes and drums with a more lyrical folk band, arriving at a sound more like Faun or even Estampie than Covus Corax. On their latest CD Magyarok Fénye, one big advantage they have over Grál et al is a great singer; Navratil Andrea (Hungarians put their surnames first) is a world-class vocalist, and one of the singers who represented Hungary last year at the Smithsonian Folklife Festival. Led by her voice, several standards of the international medieval repertoire shine: "Stella Splendens," "Como Poden," and even "Gaudete," the Latin Christmas Carol that was an offbeat chart hit for Steeleye Span in 1973. On this last, they begin with a Hungarian carol which opens the track gently, then launch into "Gaudete" itself with gusto on drums, pipes, and rebec as well as voice. The rest of the songs are from Hungarian tradition, and are given thoughtful, intricate, and often rousing arrangements on lute, hurdy-gurdy, medieval and Hungarian bagpipes, medieval and modern fiddles, drums, and bells. Three sets of dance music and one stately air, all led by bagpipes but featuring varied backing from the rest of the band, round out the offerings. The attention to detail in he arrangements, ensuring varied textures from song to song, make this a pleasure to listen to. Here's a live video led by their other singer, Szedlák József:

Navratil is also a featured performer in Fonó Zenekar, one of Hungary's most esteemed folk bands. Their latest album, Vadbarokk, ("wild Baroque") does for Baroque music what Igriczek does with medieval music, producing a skillful and polished folk sound. Beginning with a piece by J.S. Bach, they transition to a program of Hungarian folk-baroque music led mostly by twin violins, backed by bowed bass and viola, and occasionally enlivened by cymbalom, bagpipe and Moldavian lute, while Navratil and Agócs Gergely provide passionate singing of folksongs. The repertoire comes from various regions of Hungary, as well as from the Hungarian population of Transylvania, and from Roma people living among Hungarians. Mostly sad songs and dance music that churns merrily along, this CD is fun to listen to and also features detailed song notes in English, so you'll know what you're hearing: soldier's songs, love songs, peasant dances, and even a tune whose title they translate as "World's Mouth, Heart's Snaffle." World Music fans of a certain age will be reminded of Márta Sebestyén and Muzsikás in their glory days of the 1980s and 90s. Here's a video of the band with Navratil up front: 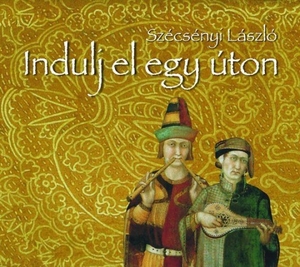 Right: The cover of this album is a ca. 1312 medieval painting by Simone Martini, and therefore in the Public Domain.

For those who prefer electric folk, there's a nice CD from a few years ago called Indulj el Egy Úton. On it, Szécsényi László blends medieval and folk music with his own electric guitar playing, bass, drums, and programming, citing as influences progressive rock in general, and Yes, Genesis and Pink Floyd in particular. In addition to the rock influence, he's a skilled folk musician on acoustic guitar, Moldavian and Arabic lutes, and bouzouki, and he invites a quartet of folkies along to add flutes, violins, and vocals. In particular, Tárnoki Beatrix's weightless voice adds both beauty and gravity when needed. Songs include traditional folksongs, settings of poems by Balassi Bálint (1554-1594) and Debreceni Szappanyos János (d. 1614), and a few composed by Szécsényi. The standout track for me is their version of "Szerelem, Szerelem," which was the slow, sinuous, Arabic-sounding song sung by Márta Sebestyén on the soundtrack of The English Patient. Szécsényi, Tárnoki and friends transform it into an upbeat World Music piece. Other pieces get a jazz treatment, and still others a classical harpsichord sound. If you like the prog-folk style of bands like Garolou and Gryphon, give this a try!