Every year, Mexicans celebrate Day of the Dead to honor those who have passed and what sounds like a morbid holiday is quite the opposite. All of the imagery, from the skeleton facepaint to orange marigolds, conveys that "the dead can dance."

I had the pleasure of celebrating Halloween and Dia de Los Muertos in the coastal town of Mazatlan. In this 3-part video series, I dive into Mexico's dark arts and culture.

Mazatlan is split into two districts. The luxury resorts are in the Golden Zone, while the Centro Historico holds art galleries and theaters from the 1800s.

I joined an art walk in the Historic District and was mesmerized by the temporary altars. These stands were decorated with real or paper marigolds, photos, favorite foods and belongings. Each had at least one sugar skull, with the name of the dead written on its forehead.

Many of the stalls in Pino Suarez Market sold skull art. The iconic skeleton lady traces back to the Aztecs, who worshipped a god named "The Lady of the Dead". In modern times, she is known as La Catrina.

Despite the dark themes, the visuals felt uplifting. The colors and active poses reflect the Mexican folk view that life and death are balancing forces.

There's even a food for the occasion: Bread of the Dead. Sold in Panama Bakery, it's airy and sweet, and has a cross-bone on top. Watch me taste it in the video above.

In the second episode, I tip-toe around the supposedly haunted Hotel Belmar. During the Prohibition, Hollywood stars like Cary Grant came here to let loose. Sometimes, the revelry got out of hand: the Sinaloa Governor was murdered during a hotel ball. Guests have reported inexplicable noises, and visions of a woman in white. Do the ghosts of the past still walk these halls? 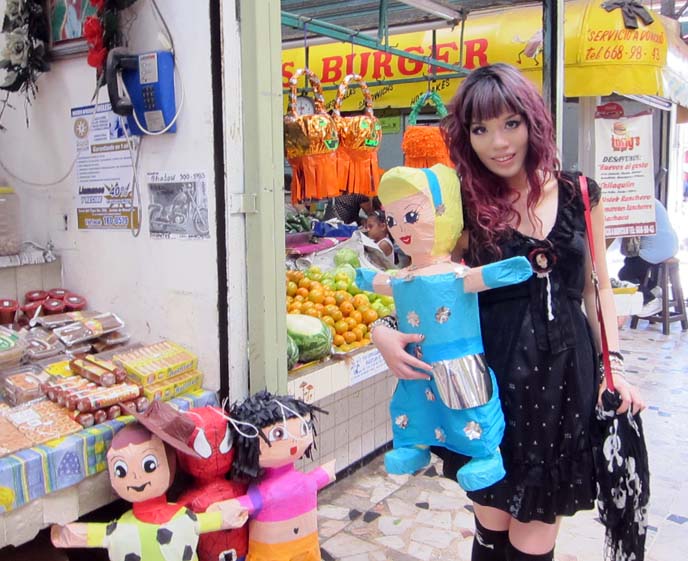 Night falls, and the Day of the Dead parade begins. Locals gather in Old Mazatlan for the annual procession. They're put on elegant costumes and painted their faces like skulls. With folk music and firecrackers, the dead have come back to life.

In the final video, I enter the Cathedral of Immaculate Conception, known as the most beautiful church in northwest Mexico. Finished in 1899, there are Gothic and Baroque influences throughout. Light shines through stained glass, forming an outerworldy glow. Locals come here to light a candle, and pray among the gold statues and carvings.

I also give a tour of my hotel, the Riu Emerald Bay. The all-inclusive luxury resort opened only two years ago. Each room has a balcony that overlooks the beach.

I'd be amiss if I didn't mention the recent tragedy: last January, Canadian tourist Sheila Nabb was severely beaten in the elevator of the Riu.

The attack renews warnings to be cautious when traveling in Sinaloa. However, my film crew and I never felt unsafe at the resort, which has staff members checking the wristbands of everyone who enters. We kept to the tourist areas and went out in groups, and felt perfectly safe the entire trip.

Many are now avoiding the region, and it's unfortunate. My videos give a glimpse of the exhilaration I felt here -- dancing with spooky stilt-walkers, speeding along the coastline in an open air taxi. With safety in mind, I hope travelers will return to Mazatlan and experience it for themselves.

Travel videos hosted by La Carmina. Directed and produced by Melissa Rundle and Eric Bergemann. Thanks to Mazatlan Tourism, and Lov/Recs for the music.

Spooky Mazatlan: the dark art and culture of Mexico