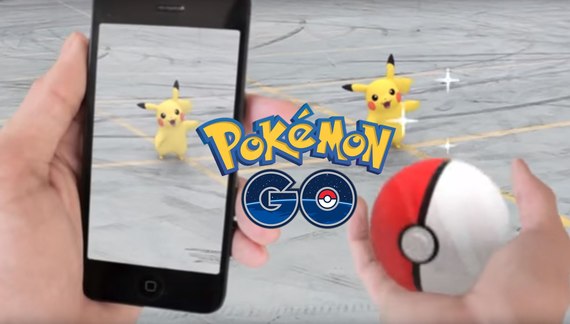 It has been hard to miss the launch of Pokemon Go. In case you have been under a rock for the past 3 weeks, it is a game which uses GPS and a simplified version of Google maps to send players out into their neighbourhoods hunting for Pokemon. The original TV series was launched in 1987, teaching the values of teamwork, dedication and loyalty, and has been syndicated worldwide.

It is no surprise that the children who grew up watching Pokemon have embraced the idea of being trainers for real. It may also be the case that tragic world events, fears around the economy and uncertainty about the future are driving factors in the game's popularity. Many have highlighted the benefits of the game to those with autistic spectrum disorders, and parents have been delighted by a game which actively encourages children to go outside and interact with the world.

I should say some parents are delighted, because, as seems inevitable, when something new comes out there are those who decide it must be a dangerous thing. It was Douglas Adams who summed up the three responses to new tech as acceptance, excitement or fear. It might be easy to dismiss individuals whose fear of change is their motivating factor. Some organisations supposedly dedicated to tackling child abuse have leapt on the bandwagon though and I feel it's important to challenge this as they are actively endangering those they claim to want to protect.

Those calling for a ban on Pokemon Go claim paedophiles will use the app to lure children away from Pokestops and Gyms (places where more than one player may encounter each other). For many years this was the standard warning children were given about child abuse. The only threat to children came from strangers, who with an offer of a puppy or an ice cream would lure them away.

The reality, as any professional who works with the survivors/victims of child abuse knows, is very different. Whilst those rare predators exist, and children must be warned against going off with strangers (advice which is relevant regardless of Pokemon Go), the reality is children are most at risk from those who know them. 80% of child abuse is perpetrated within the home, a stark and sobering statistic.

When the abuser is not a family member, it is most likely to be someone who wins the trust of the child or the parents by a process called grooming. As research conducted into the Rotherham, Rochdale and Oxford abuse cases shows, predators choose whom to groom with care. They look for a vulnerability they can exploit, and build a relationship with their victim where they convince them that what is happening is not abuse. Pretending that this is based on chance encounters actively puts children at risk, selling a palatable story (abusers are strangers in dirty raincoats) rather than the truth.

That organisations are ignoring everything they should know about child abuse is worrying. Equally disturbing is that they seem to know nothing about how young people and children behave. A quick question, what is the reaction of a young person to being they are not allowed to do something?

Yes, you just attracted the interest of every young person between 12 and 20, even those who previously didn't care. In fact, it's not just young people who behave this way. Captain Cook famously exploited the power of the ban. He had observed that German sailors suffered from far lower rates of scurvy than English ones. The medical knowledge of the time had no explanation for this (now we know it was caused by vitamin C deficiency). He wondered if it was the German habit of eating sauerkraut, and ordered that his men have a daily ration. When his men refused to eat such strange, foreign food, Cook's solution was simple. He banned his men from eating the sauerkraut and labelled the barrels "officers use only". The sauerkraut quickly disappeared and rates of scurvy declined.

There is a more recent example which should be known by all who work with children. Research has shown that the DARE programme, funded for many years in the United States, and known by the slogan "Just say no" not only doesn't work, but may encourage drug use. When adults overreact and appear out of touch, children stop listening. A moral panic around technology which is exactly the kind of reaction to turn kids away from any other saftey advice you may offer.

It is frightening to imagine that there are people who want to exploit a child. I don't want this article to leave parents who are anxious about their children playing Pokemon Go feeling there is nothing they can do. Here are some practical things parents and carers can do to help protect children.

If you are still concerned about your children playing Pokemon Go, an additional idea. Put it on your own phone and go out hunting with them! You never know, you might have fun! And if you do find a gym, Team Mystic all the way!
More:
pokemon goParentsonline safetyparenting tipsChild protection
Newsletter Sign Up
Raise the kind of person you'd like to know
Subscribe to our parenting newsletter.
Successfully Subscribed!
Realness delivered to your inbox